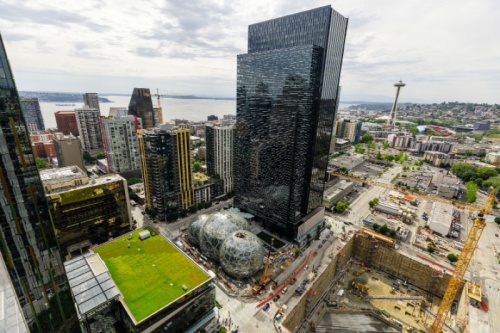 The online retailer Amazon announced in September it is looking to make a $5 billion capital investment to create 50,000 jobs across 8.1 million square feet of office space. The Seattle-based company has since accepted proposals from more than 230 cities and metro areas.

A proposal for Houston’s downtown corridor to be the company’s second headquarters was submitted ahead of the Oct. 19 deadline with help from the Greater Houston Partnership, an organization dedicated to promoting the Greater Houston area as a place to work, live and run businesses.

In addition to the University of Houston and the Texas Medical Center, several other institutions and landmarks fall within the area, including Rice University, Houston’s Museum District and Hermann Park. GHP President Bob Harvey said he believes the Montrose and Midtown areas are also known for their quality-of-life perks, including an abundance of trendy restaurants and bars.

“There was a growing recognition that this area represents a very unique asset of Houston,” Harvey said. “When you look at all the attributes and assets that fall within this relatively modest area, it had virtually, if not entirely, everything that Amazon was looking for.”

However, even with the Greater Houston area stretching dozens of miles outward in each direction, suburban areas—including The Woodlands—were not included in Houston’s bid.

“The way the [request for proposals] read, Amazon preferred to receive only one submission from a regional entity within metro areas,” said Gil Staley, CEO of The Woodlands Area Economic Development Partnership. “That one submission was done and organized by the GHP, and a committee within the GHP received all of the bids from the entire Houston region and narrowed it down to what their committee felt was the most competitive in addressing all of the needs that Amazon pointed out and there were not any suburban markets that made that list.”

Some of Amazon’s key requirements for a city include close access to an airport, mass transit facilities and a metropolitan area with more than one million people.

Staley said while there may not be a physical location of Amazon in The Woodlands, its presence could still be a benefit to the area.

“Certainly we’re disappointed in that decision, but it’s one that we supported. The region will benefit no matter where it’s selected—the entire Houston region will benefit from a project this size,” he said. “Fifty thousand jobs would benefit everyone in the community and certainly those that are seeking employment would benefit from a job wherever that might be located.”

Harvey said Houston’s proposal included a letter signed by approximately 60 business leaders welcoming Amazon to the Houston area. He said he believes Amazon would benefit from having access to the local talent and expertise as well as the industries the city is known for, including energy, health care and even the space program, NASA.

“This was really to drive home the point to Amazon that Houston will welcome them and their disruptive thinking into our industries to make them more competitive and advance them,” Harvey said. “Houston is the ideal city for that to occur. We’ve always tried to innovate in our core industries; we just need to marry that type of innovation with this new digital form.”

Harvey said elected officials in the area are in favor of this type of economic growth in the city.

Amazon officials said the process of evaluating the more than 230 proposals they have received is expected to last through the spring of 2018.

Since the deadline to submit proposals was Oct. 19, Amazon has not provided any updates on what will happen next aside from that a decision will be made sometime in 2018.

Harvey said realistically there will be a point where Amazon narrows down its more than 230 proposals to a group of finalists, but there is no telling if or when that could happen.