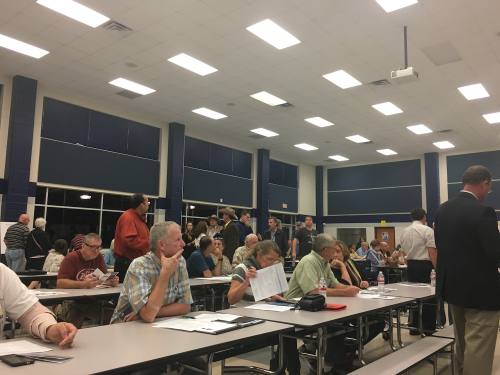 Dozens of residents packed the auditorium of Bear Branch Elementary in Magnolia Monday night to listen to officials respond to the ongoing debate in Montgomery County concerning rising groundwater fees. For several months now, residents in the area said they have seen monthly water bills over $100 per month, mostly associated with utility fees.

The LSGCD was created by the Texas Legislature in 2001 to preserve, conserve and protect Montgomery County groundwater supplies. It is one of nearly 100 groundwater districts throughout the state. The district works to administer, regulate and conserve groundwater resources in Montgomery County. As a result, several cities have partnered with the San Jacinto River Authority Groundwater Reduction Plan to reduce the use of groundwater as mandated by the LSGCD.

However, as fees associated with the delivery of water from the SJRA rose in recent years, city officials said they now regret entering the partnership. After the cities of Conroe and Magnolia refused to pay the higher fees and protested that the SJRA's seats on the LSGCD board are a conflict in interest, the SJRA countered with a lawsuit for breach of contract.

Due to ongoing litigation, representatives from the Lone Star Ground Water Conservation District and the SJRA said they were not permitted to discuss the lawsuit during the town hall.

Webb Melder, former mayor of Conroe, said the city should not have entered the agreement and he believes water rights should not be government controlled.

"Unfortunately, the greatest mistake that I made as the mayor of Conroe, Texas, [was] I trusted two state agencies; one of those is SJRA, the other Lone Star Groundwater Conservation District," Melder said. "[The SJRA GRP] was actually a legal provision requiring us to forfeit our legal rights, and it is hard to imagine a state agency to ask anyone to forfeit their legal rights. Groundwater is a private property right. It is protected by the laws of the state, [but] it is not owned by the state."

During the town hall, representatives for and against the SJRA GRP spoke to residents to try and explain the scope of water availability in Montgomery County and why residents are facing higher rates.

Bob Harden, a hydrologist and president of engineering firm R W Harden & Associates, said SJRA and LSGCD projections that suggest a depletion in storage are inaccurate and that the amount of water in Montgomery County is not falling. Harden said while water pressures in the aquifer changes as water is pumped from the ground, it does not mean there is a groundwater shortage.


"Historically, the primary source of water in Montgomery County has been groundwater, far and away, and very little surface water," Oliver said. "The question is, 'Do we continue to rely on groundwater as our sole source to meet future needs?' ... Or do we try to manage it more sustainably?'"—Wade Oliver, a senior hydrogeologist with INTERA

However, officials with the LSGCD and SJRA disagree that levels have remained unchanged. Wade Oliver, a senior hydrogeologist with INTERA, a Texas-based geoscience and engineering firm, said due to population growth the levels have experienced as much decline in the last 15 years than in the last 50 years.

"To say that these pressures don’t matter is where we disagree," Oliver said.

He said as pressure in the aquifer declines utility providers have to work harder to yield the same amount of water production, leading to increased costs.

"Historically, the primary source of water in Montgomery County has been groundwater, far and away, and very little surface water," Oliver said. "The question is, 'do we continue to rely on groundwater as our sole source to meet future needs that [will be] 2-2.5 times what we need today?' Considering the problems that water providers have been having, do we try to manage it more sustainably? The [LSGCD] chose to manage it sustainably."

The night's program was concluded with remarks from Bell, who said there would be no easy solution for either side of the issue.

"We all recognize that without water we don't exist, and in Texas it's a huge property rights issue," Bell said. "We recognize the challenges that everyone finds themselves in in regards to the contract, and certainly water is going to cost more and more as we go forward. The question is not, 'Do we have enough water?' The question is, 'How do we access that water and what the responsible use for that water?' and I think that's why we're all here today."

Bell said because water providers and cities often pass fees directly to residents, he believes the best recourse now is for residents to try and fight the fees by talking with local water providers and contacting their elected officials before the next Legislative session. He said he also expects a bill to be filed in the Legislature to convert the LSGCD Board of Directors into elected positions.

"I believe water is a huge issue and it's one that we've got to get the answers to figured out and make sure in the process we keep in mind private property rights," Bell said. "We have some work to do, so I challenge those in this room to get this thing done, get it fixed and move forward as a strong Montgomery County."