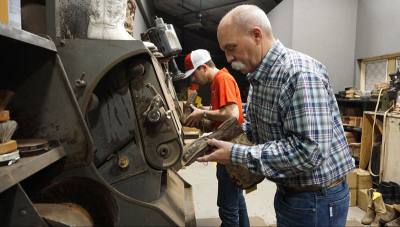 Rex Cartwright and his youngest son, Cullen u201cTateru201d Cartwright, use heel finishers to repair boots and shoes. These machines replaced all of the equipment destroyed by a 1988 fire.

What started out as a small shoe repair shop 64 years ago along Main Street in Conroe has expanded to Cartwright’s Western Wear & Conroe Shoe Shop along North Frazier Street and Loop 336, thanks to the business agility of three generations of the Cartwright family.

Husband-and-wife team Rex and Shelly Cartwright own and manage the combined retail store and shoe repair shop in the nook of the Homestead Plaza shopping center, which Rex and his brother, Keith, built in 2017. The property was the Cartwright homestead, where Rex’s father was raised in the 1950s.

The site has morphed over the years from a camper van lot to a spot for a liquor store to the Western-wear retail store. Today, Cartwright’s is where Rex and his youngest son, Cullen “Tater,” mend and polish cowboy boots, shoes, purses and belts.

“We do more shoe repair than sales of Western wear,” Rex said. “Shoe repair work is steady from October to May. Business slows down during the summer months. Christmas and rodeo times are busiest.”

Rex began working at the shoe shop with his grandfather when he was about 12 years old, he said.

His grandfather also repaired saddles and tack—the leather horse-riding gear cowboys and ranchers use—for customers who traveled from as far as Cleveland, Navasota and Madisonville, Rex said, but dogged by health issues over the years, his grandfather had to stop in the 1970s.

When Rex’s grandfather died in 1984, Rex’s father sold a service station off Main Street in Conroe that he had managed for a few years and started to help Rex at the shoe shop.

A 1988 electrical fire forced the family to rebuild the store and replace the destroyed shoe repair machines, but a fellow shoe repairman in Louisiana who was planning to close his shop heard about the fire and offered to sell his equipment to the Cartwrights.

“We looked at all the machines, drove back to Louisiana with a truck and a trailer the same day and brought all of them here,” Rex said. “Every machine, except for a 15-year-old machine we got somewhere else, is from that closed shop in Louisiana.”

Heel wheels, stitchers and sole presses hum away loudly, so a loud buzz is set off when the front door is opened to notify shopkeepers when customers enter the store.

Shelly and her lifelong friend also work in the store. Rex and Shelly’s older son and daughter also helped out during their high school years. Now that Tater has graduated, he is carrying on his family’s tradition of learning to fix shoes and boots.

“Now that the community is growing by leaps and bounds, it is no longer countryside,” Rex said. “But in some areas further north and northwest, Western wear is still a way of life.”
SHARE THIS STORY

“There shouldn’t be ingredients when you go buy a pack of chicken. It should just be chicken,” Mike Majkszak says.

This is the bakery's second location.

The Conroe ISD board of trustees decided on the names of four CISD buildings at a June 15 meeting.

Because of the donation, the health center is able to provide 200 visits at no cost at its Grangerland location.