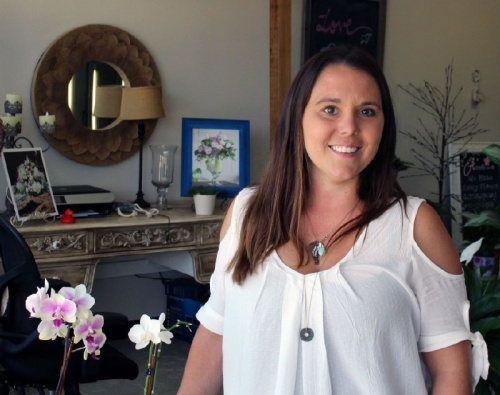 A Different Bloom owner Holly Burns opened her business in May 2013.

A Different Bloom owner Holly Burns spends her days surrounded by flowers and ribbons at her blossomy boutique. A florist for more than a decade, Burns creates contemporary flower arrangements, personalized gift baskets, corsages and formal items for a variety of occasions.

Burns got her first job in the florist industry in 2008 working as a delivery driver for a Houston-based plant-leasing company. Although she intended it to be a temporary job, Burns said she was quickly attracted to the creative process behind floral arrangements.

Although people tried to discourage her from learning the craft, Burns said she was determined to do it.

“They pretty much told me, ‘You can’t learn to do this, you don’t have what it takes,’” she said. “But I’m not the type of person to be told I can’t do something, so I wanted to prove that I could.”

For the next five years, Burns studied the craft and worked as a floral designer for two more Greater Houston-area flower shops. In 2013, Burns decided to take what she had learned and open her own shop in her hometown of Montgomery.

Burns opened A Different Bloom in May 2013 in the Waterpoint Shopping Center in Montgomery, before relocating her shop to its current Conroe location in 2015.

“I would rather do weddings all day long than do anything else,” she said. “[One of my] favorite things is when the bride squeals when you hand her the bouquet…That’s when you know you did something good.”

However, the Montgomery native said owning and operating a floral business is not all roses. In addition to being desensitized to the smell of flowers, Burns has also endured hot glue injuries, long hours and almost losing a finger—all in the name of floristry.

“Some people just think I play with flowers, but I don’t,” she said. “I put my heart into everything I do. I try to make everybody happy and put a smile on everyone’s faces.”