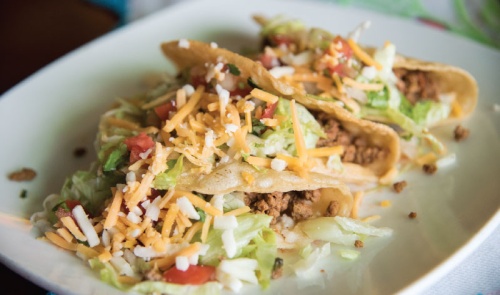 For nearly two decades, Carmelita’s Restaurant owners Carmen and Wayne Overbay have served homemade tamales and other Mexican dishes to the Conroe community.

Nestled in downtown Conroe, the restaurant offers a variety of Mexican foods and flavors for breakfast and lunch. The couple said their take on traditional dishes, such as huevos rancheros, enchiladas, breakfast items, fajitas and tacos, as well as a wide variety of tamales, has garnered a loyal following and the support of the local community.

“It makes you feel really good because they have been following you for a long time,” Carmen said.
Wayne, a Montgomery native, has worked in the restaurant industry his entire career, including stints at the Walden Yacht Club, the April Sound Country Club and the Panorama Village Golf Club. Wayne also taught at the The Art Institute’s Culinary Arts School.

Carmen immigrated to Conroe from San Luis Potosi, Mexico, in 1991 to be with her family. For several years she worked as a seamstress, as a cake decorator and at local restaurants. She learned to cook with her mother as a child and has worked as the restaurant’s primary cook since its opening in 1998.

“I didn’t know anything better—just Mexican home cooking,” Carmen said. “I liked cooking since I was 8. I learned with my mom, and my kids like cooking, too. They grew up here.”

Over the years, the Overbays have seen the city of Conroe grow. What once was a sleepy downtown has grown into an ascending arts and music scene.

“The downtown Conroe area is growing like crazy,” Wayne said. “When we first started it was completely dead. Now, they have both theaters going and lots of live music. Downtown has really changed a lot. It’s good for the business.”