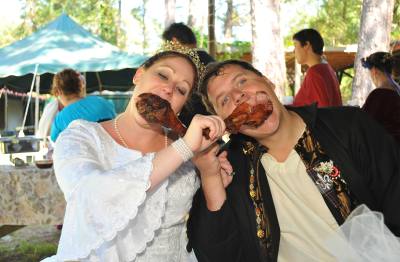 There is a variety of food options available at the Texas Renaissance Festival.

There is a feast available for festival visitors this year to enjoy, including a handful of new options making a debut this year at the Texas Renaissance Festival. The annual event begins Sept. 30 and takes place at 21778 FM 1774, Todd Mission, every weekend through Nov. 26.

New spin on a festival classic

Honey-baked turkey leg: Created by the Imhoff family of Renaissance Catering, the turkey leg will be served throughout the village in shoppes No. 11, 50, 408 and 414.
Bourbon-molasses turkey leg: A new twist on the traditional turkey leg, this delicacy is created by Sherwood Forest Foods owner Matt Basse. The turkey leg is served in the Enchanted Forest area in shoppe No. 89.

Returning fan favorites
The following is a list of foods commonly identified as top festival favorites on annual attendee surveys.

The King's Feast: The King's Feast package ($119) includes festival admission, two hours of entertainment, unlimited portions of a six-course meal served with wine, mead and ale as well as a commemorative drinking glass. Reservations are recommended.
Be the Gyro Hero: During the Heroes and Villains weekend (Nov. 11-12), the festival hosts a gyro eating contest in search of the Gyro Hero.
Royal Chef Showdown (Oct. 17): the festival hosts the finals for the Royal Chef Showdown. The showdown started early in the year with a call to professional chefs and cooks to create new festival food. Nine chefs were selected to participate in the final showdown Oct. 17. The contest will be judged by area food writers and special guest judge chef Darren McGrady, former chef to Queen Elizabeth II and Diana, Princess of Wales.

Katy ISD's board of trustees unanimously voted to approve the redesign of Katy Elementary School, located at 5726 George Bush Drive, Katy, at their Nov. 15 meeting.