Fighting for the forest: Sam Houston National Forest in need of funding

contribute today
The Sam Houston National Forest—which spans about 163,000 acres and 280 miles of trails across several counties, including Montgomery—is one of four national forests in Texas. It also draws visitors to the Conroe area, said Shannon Overby, director of the Conroe Convention and Visitors Bureau.

“The great outdoors is one of our major marketing pillars,” Overby said. “Probably one of the biggest reasons visitors come to the Conroe area is because of the outdoor activities offered here.”

But maintaining the forest is a daily fight against erosion, a lack of funding and years of improper design—largely fought by volunteers, officials said.

On Jan. 11, the East Side Trailhead—the last remaining portion of trails to be repaired following Hurricane Harvey damage in August 2017—was reopened. Harvey followed the Tax Day floods in April 2016, and it caused nearly $5 million in damages, said Ed Ponikvar, vice president of the Sam Houston Trails Coalition, a nonprofit dedicated to maintaining the forest’s trails. Both storms devastated the trails.

“These trails were all obliterated,” he said. “[The storms] made holes in the ground that were armpit deep. It just wiped out stuff, ripped bridges out.”
RELATED STORIES

• Montgomery County judge: 'We will end up with shelter-in-place if people don’t stand behind orders'

• City of Montgomery postpones May elections until Nov. 3

The Sam Houston coalition is now turning to the community to help fundraise for critical projects such as repairing damaged bridges, officials said.

“It’s fallen on volunteers to provide improvements,” volunteer Jane Prentis said. “A lot of erosion control has been done, but more is needed.”

Most of Sam Houston’s trails were built in the mid-1900s without proper design guidelines and on sand that is highly erodible, forest officials said.

“Many of the trails ... were not sustainably built nor well laid out,” said Trey Cooksey, a recreational trails program manager for the Texas Parks & Wildlife Department, a state agency.

When it rains on poorly designed trails, water flows directly down the path, eroding the soil, officials said. Proper design includes dips to divert water or rerouting to a zig-zag pattern.

“It’s one of the most difficult soil structures in the U.S. to build sustainable trails,” he said, adding that most trailheads have not seen improvements in 20-plus years.

Taylor said the Forest Service has worked to implement better trail construction as an agency.

“We have learned to value trail location,” he said. “New trails ... are being built using the best trail construction practices.”

The Sam Houston National Forest relies on various revenue sources for funding, but it also gives back to the local economy, Ponikvar said.

Revenue sources include the state fuel tax, forest entry fees, and grants and donations—which total more than $5 million annually, Ponikvar said. The forest is also a designated wildlife management area, so fees collected from hunters pay for programs such as wild turkey restoration.

The forest offers camping, hunting, fishing and other recreational opportunities, as well as timber. When timber is removed, a portion of the funds return to the county for schools and roads.

The coalition has two Texas Recreational Trails Program grants from 2013 and 2014, which are administered by the TPWD, but the coalition needs community help to cover 20% of the cost, Pape said.

Ponkivar said he has spent $40,000 over the years from his own pocket to pay for trail needs.

The Forest Service—which has worked on several projects at Sam Houston, including opening the East Side Trails—has undergone recent budget cuts. From FY 2017 to FY 2020, the Forest Service annual budget decreased from $6.07 billion to $5.69 billion.

"The [Forest Service once] had lots of money ... and they have been cut, cut, cut," Prentis said.

The National Forest System Trails Stewardship Act—which required the Forest Service to increase the use of volunteers and partners for trail maintenance without designating additional funds—was passed in 2016 in response to the nationwide maintenance backlog of trails. However, the percentage of national parks trails meeting Forest Service standards between FY 2016 to FY 2019 was only about 23%, according to the Forest Service.

This could be partially due to large rain events, which skew the numbers, Taylor said. But coalition members said it is a challenge to meet the criteria due to limited funds.

“In order to meet the standards, it would bankrupt you,” Ponikvar said.

Despite the challenges, the Sam Houston National Forest remains a destination for Conroe and Montgomery-area residents such as Melanie Michaelchuk, who said she is preparing for her first overnight hike.

“I’m happy to have a place so close to home to explore,” she said. 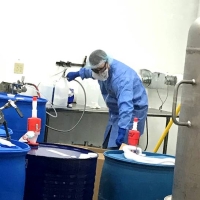 Inkjet Inc. is repurposing the chemicals it uses to create industrial inks to produce hand sanitizer for industrial corporations, hospitals and first responders.