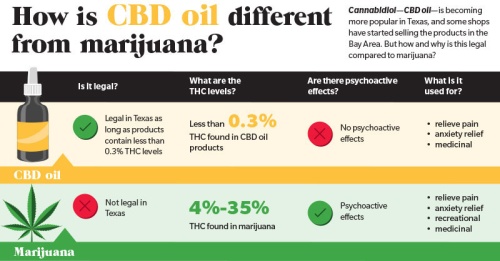 Cannabidiolu2014CBD oilu2014is becoming more popular in Texas, and some shops have started selling the products in the Bay Area. But how and why is this legal compared to marijuana?

A common misconception surrounding CBD oil is its relation to marijuana and tetrahydrocannabinol, or THC. Although marijuana and CBD products come from plants in the cannabis family, CBD oils, such as the ones sold at The Hemp Man of Texas in League City, are harvested from industrial hemp plants that do not contain enough THC to result in psychoactive effects, Hemp Man of Texas owner Zach Adair said.

While retailers can sell CBD products to help with anxiety, joint pain and other ailments, physicians are also able to prescribe CBD to treat epilepsy and seizures.

“Certainly, CBD oil is an agent that has been discussed in national epilepsy journals for the last few years, and it’s natural that we would want to investigate and use these compounds due to the fact that it is a benign substance but also has some efficacy,” Kelsey-Seybold neurologist Michael Newmark said.

CBD oil products with THC levels of 0.3% or lower are legal to purchase and consume in Texas.

CBD oil was still legal when Adair’s business started in 2016, but many were ignorant of the law, he said.

“Now we’re trying to come out more into the sunlight,” Adair said.

However, the process for patients to receive CBD prescriptions is more involved than walking into a store and buying oils on the spot. One brand—Compassionate Cultivation, based in Austin—provides medicinal CBD products used to help treat epilepsy that is intractable, or nonresponsive to surgery, said Michael Watkins, a pediatric neurologist at UTHealth and Memorial Hermann in The Medical Center.

To obtain these medical-grade CBD products, an epileptologist—someone who helps treats epilepsy—identifies the patient as an intractable epileptic. Another epileptologist must agree the patient would be a good candidate for the products before proceeding with a prescription.

“In a system like this where everything is new, I think it’s a way to make sure we’re all doing it the right way,” Watkins said.

“We have a lot more people asking about it,” he said. “For me, it gives you another tool in your arsenal of things that you can use for these severe forms of intractable epilepsy.”

Two CBD oil-related bills await Gov. Greg Abbott’s approval as of press time: House Bills 1325, which would legalize the farming of industrial hemp, and 3703, which would expand medical use for prescriptions with up to 0.5% THC to help treat patients diagnosed with epilepsy, seizure disorders, multiple sclerosis, autism, terminal cancer and other diseases.

“I believe Texas should join the rest of the 33 states, including Washington, D.C., that have some form of public marijuana or cannabis programs,” Reynolds said. “We’re certainly behind. We should leave it up to Texans to decide. I think it would pass overwhelmingly.”

Reynolds said he believes Texans having access to CBD oils is the right step.

“CBD is helpful to those who need it, and there is a big market for it,” he said. “I have talked to farmers and industry folks that said [marijuana] would help create jobs and consumers who said it would help them medically. It’s a win-win.”


TRICKLING INTO THE AREA

Adair started The Hemp Man of Texas after his wife suffered a major seizure that led to two brain surgeries and a spinal fusion. CBD oil helped her pain, sleep, inflammation and anxiety, Adair said.

CBD oil has helped Adair himself with his own anxiety, sleep, and neck pain and stiffness that he has been suffering from a years-old injury.

“Ever since using our oil daily for many years now, I have not had a single lock up, and the pain is almost 100% gone. Barely ever feel it or think about it,” he said. “[CBD oil has] been a huge blessing for our family.”

William Best opened Coastal CBD & Wellness in Kemah a few months ago after being convinced of CBD’s benefits.

Best suffers from a shoulder injury. Since starting CBD oil, he said he has not had to go to the doctor to manage pain.

“It seems like it’s really, really working,” he said.

He gave some to his 13-year-old beagle, who, at the time, was not chasing squirrels or doing the other activities she loved. After a few days on the oil, Best’s dog was back to acting like herself, he said.

Some residents might be wary of CBD oil, but those in the Bay Area have been open and receptive, Best said. Both Best and Adair have stories of customers who swear by CBD oil’s effectiveness.

“It’s really been a welcomed thing in Kemah,” Best said.

Adair said the Texas Department of State Health Services in April removed hemp from the controlled substances list, which will lessen the stigma against CBD oil and make the public more receptive.

“It’s just gonna get bigger and bigger,” he said.

As retail products are becoming more available to the general public, some physicians are embracing CBD oil’s medical benefits for patients suffering from seizures and epilepsy.

Watkins said he thinks it is possible for CBD oils to be used to treat epilepsy and seizures in lieu of other medications.

“I think it’s something that’s going to have to be heavily researched,” he said. “As time passes and restrictions change and stigma changes, you may see the ability to use CBD oils in other patients with epilepsy who don’t fit those exact criteria.”

Both Newmark and Watkins said they would not recommend prescription CBD oils be used on their own to treat epilepsy and seizures but should be paired with other prescribed medication.

“Even I, being cynical as I am, think it is useful for some pain disorders, particularly the pain disorders that are associated with Parkinson’s disease and multiple sclerosis,” Newmark said. “I would start off at a low dose with those, but I have noticed some anecdotal improvement in folks who are really miserable.”