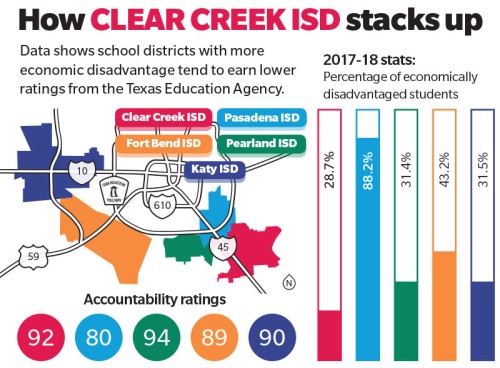 Texas school districts received state accountability ratings last fall, and while Clear Creek ISD earned high marks, district officials claim the state’s system is too reliant on high-stakes testing, does not give a clear idea of how the district is improving, and fails to include factors that affect performance.

As a result, the district in late March released its community-based accountability report for the 2017-18 school year. It includes several data points from parent survey results to graduation rates to give the district, its students and their parents a more complete picture of districtwide performance, officials said.

Officials have criticized the Texas Education Agency’s new A-F scoring system, saying it judges district grades based mainly on a State of Texas Assessment of Academic Readiness, or STAAR test. TEA’s system also does not take into account socio-economics and other factors that influence testing results, prompting the district to develop its own accountability report, officials said.

“[The state’s report exists] really to pass judgement on a student, school or a school district,” said Steven Ebell, CCISD’s deputy superintendent of curriculum and instruction. “That’s not really representative of the learning that takes place.”

About 29% of CCISD students are considered economically disadvantaged, which means they qualify for free or reduced lunch. This is less than the statewide average of about 61%, but still, CCISD schools follow a statewide trend some educators say is a cause for concern.

More affluent campuses received higher TEA scores than those with greater levels of economic disadvantage in 2017-18, according to a Community Impact Newspaper analysis of CCISD’s 44 schools. For instance, 18.9% of Gilmore Elementary School’s students are economically disadvantaged, and the campus scored 94. McWhirter Elementary School, of which 75.4% of students are economically disadvantaged, scored a 76.

Children at Risk, a Houston-based research organization focused on Texas children’s issues, has found a relationship between scores and poverty but has not determined whether it believes the rating system is unfair, said David McClendon, co-director of the group’s Research Center for Social Measurement and Evaluation. About half of districts with an economically disadvantaged population of 75% or more scored an A or a B in their overall ratings, he said.

Programs are in place in CCISD to help close the gaps.

Communities in Schools is a dropout prevention program designed to help economically disadvantaged students stay in and succeed at school. The organization meets students’ food, clothing and other needs so they can concentrate more on education, Director of Resource Development Hillary Gramm said.

“It’s not an equal playing field for these kids,” she said. “We look at what the big issue is so there’s a paradigm shift.”

CCISD consistently has a lower dropout rate than the state, though 2017’s dropout rate of 1.2% was the district’s highest in the five years it has released its community-based report.

The district has its own programs as well. The district partners with area pediatricians and day cares and also offers free digital literacy programs to anyone in the district to better prepare incoming students for school, Chief Communications Officer Elaina Polsen said.

“We want to provide lots of different opportunities for each child to be successful,” Ebell said.

Polsen pointed out economically disadvantaged students might start preschool or kindergarten a bit academically behind compared to their peers.

“That doesn’t mean they can’t get to the same place; it just might take a bit longer,” she said.

Gramm said Communities in Schools can help address basic needs to get more students on the same page academically.

“Education is one of the things in life that can never be taken away from you, so let’s get them educated now and have a positive influence on the rest of their lives,” Gramm said. “We can be proactive now or reactive later.”

CCISD’s criticism of the TEA’s scoring and its shortcomings prompted the district in the 2013-14 school year to develop its own community-based accountability report to give residents a clearer understanding of the district’s performance. CCISD is part of the Texas Public Accountability Consortium, which is made up of 120 districts that have agreed to work with each other and state legislators to come up with community-based accountability measurements, Ebell said.

“We try to add in more of the discreet details,” Ebell said.

The report helps the district improve itself. Years ago, families were telling the district not enough information was being provided so parents could help their children at home. The district has adjusted accordingly to meet that need, Polsen said.

From the district’s perspective, that is one example of something a state system cannot calculate or improve, which is why officials have been pushing for local accountability measurements, Polsen said.

“I think we’ve grown in lots of ways that, without this information, we wouldn’t have been able to bring it all together,” Ebell said.

Meanwhile, the TEA’s A-F scores are calculated based on the evaluation of three areas: student achievement, school progress and closing the gaps.

CCISD and other districts have criticized the system since it was established by House Bill 22 in the 85th Texas Legislature in 2017. Ebell said the TEA oversimplifies data and uses a “convoluted method” to determine a district’s or campus’s letter grade based on STAAR testing. District officials do not believe a simple grade tells anyone much about a district, he said.

“The goal of the [STAAR] test, in my mind, is not necessarily to identify a student’s strengths or weaknesses. The goal of the system is to classify schools as either winners or losers,” he said.

Because STAAR scores are the primary criteria used to calculate ratings, officials said ratings reflect what is happening in a campus or district on the day of testing rather than comprehensive performance and that STAAR tests are given too much weight.

“STAAR is not significant to [parents],” Polsen said.

State accountability ratings exist because TEA answers to the state, but CCISD answers to its community, Ebell said.

“We need to ask to whom we are accountable,” he said. “We should be responsive to the needs of our parents and our students.”
SHARE THIS STORY