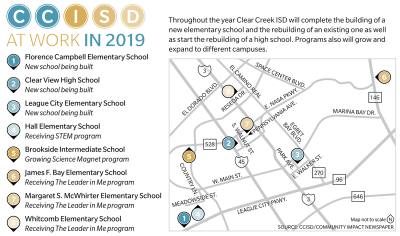 Money from a 2017 bond of $487 million will fund several projects throughout 2019, including the building of a new elementary school and the rebuilding of two older schools.

Florence Campbell Elementary School is being built to help alleviate some of the severe overcrowding the district is seeing as enrollment increases, Polsen said.

Charter school Clear View High School will be rebuilt on a vacant lot adjacent to the existing school, which has a capacity of 350 students. The $45 million project is set to begin in February and finish in 2020.

Crews began rebuilding League City Elementary School in May. Students moved to a temporary facility in January 2018 so the original building could be demolished and rebuilt. The $46.9 million project is expected to be complete by August.

CCISD has formed the School Boundary Advisory Committee of about 44 district residents who have been meeting regularly since October to come up with recommended boundary changes.

The committee will present its recommendations to the CCISD board of trustees in February, Polsen said.

The building of a new campus, Florence Campbell Elementary School, makes drawing school attendance boundaries necessary, but even without a new school in the works, overcrowding at several campuses means boundaries must be adjusted to even out enrollment levels, Polsen said.

Clear Springs and Clear Falls high schools and Hall and Weber elementary schools are all over capacity, and other campuses are underutilized, she said.

“It’s hard to make those kinds of changes, especially at the high school level, but we have to do it,” Polsen said.

CCISD has not adjusted its school boundaries in about seven years, Polsen said.

CCISD officials will expand the district’s science, technology, engineering and math, or STEM, program, to Hall Elementary School, but first Florence Elementary must be built to alleviate overcrowding.

A STEM-focused program is offered at Ed White Elementary School.

4) The Leader in Me program spreading to other campuses

Falcon Pass Elementary School was the pilot for The Leader in Me program, which teaches soft skills, such as eye contact and confidence. When the district saw its results officials made a goal to get the program into every school.

The program has since expanded to Armand Bayou Elementary and will soon expand to Bay, McWhirter and Whitcomb elementary schools, and others over the next five years.

Houston Methodist Clear Lake Hospital, Space Center Rotary and others have donated hundreds of thousands of dollars toward the program.

A CCISD committee is in the early stages of examining school start times to determine if they should be adjusted, Polsen said.

The CCISD board of trustees could examine the issue as early as February.

The Burger Joint will open its first location outside Loop 610 in Baybrook.

ROUNDUP: Here are 3 destinations for viewing 2021 holiday lights in the Bay Area

Several local city governments and businesses have put up festive light displays, which will be open for viewing through early January. This list is not comprehensive.