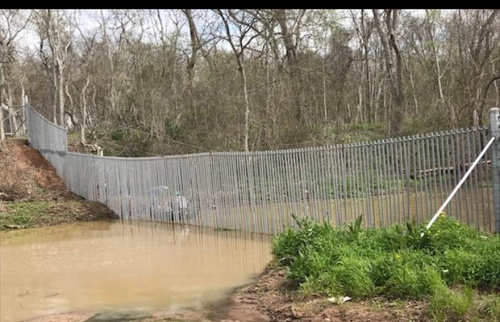 The recent completion of an Oyster Creek drainage project through Fort Bend County has opened up new access points for paddlers visiting Cullinan Park and has deterred wildlife from wandering onto the runways at the neighboring Sugar Land Regional Airport, officials said.

In partnership with the Gulf Coast Water Authority, the project resulted in dredging—or clearing—along Oyster Creek creating eased flow rates by removing obtrusive items like downed trees and other buildup.

“We partnered with Gulf Coast Water Authority to clear both sides [of Oyster Creek] so they could dredge,” said James Patterson, Fort Bend County Precinct 4 commissioner. “They have dredged all through the prison property and the Cullinan Park property and all the way down to Hwy. 6. In the process of us clearing, our contractor was able to take out old prison bridges that were still there even though the top was gone and the pilings were still under water and therefore would catch debris.”

“Either side of Cullinan Park is pretty accessible to paddlers, and it would make a very long, nice paddling trail throughout the county if it were to be accessible,” Wierzbicki said. “But it hasn’t been because it hasn’t been dredged as long as anyone has been keeping record.”

The partnership between the GCWA, Fort Bend County, the Cullinan Park Conservancy and SLRA dates back to 2016, Patterson said. However, clearing at the site did not begin until October 2017 after Hurricane Harvey hit the state in August.

“It got kind of a slow start,” SLRA Airfield and Facilities Manager Ken Durbin said. “We didn’t actually see anything start until after Hurricane Harvey.”

Prior to completion of the project, SLRA employees would see many deer and feral hogs wander onto the runway—counting as many as 55 deer in one night, Durbin said. The feral hogs would cause damage to the runway safety areas, he said.

“If an aircraft goes off the runway, you want smooth ground so it doesn’t flip over,” Durbin said. “The ruts they were putting in would damage nose gear, landing gear and really cause a lot of damage.”

To deter wildlife, the airport paid to install fencing and a water gap, which is like a table that runs across the creek with poles hanging down to the water surface, Durbin said. Although feral hogs can swim, they do not put their heads underwater, so the poles discourage intrusion, he said.

“Our property line crosses the creek is the issue, so how do you fence across the creek? You really can’t,” Durbin said. “You’ve got to let the flow go through; you’ve got to let people have access. So, this water gap will actually move with the flow of water and let debris and water pass through.”

To complete the work all along the border shared between the airport and the park, SLRA closed the runways for three nights straight and contributed about $84,000 to the project for fencing and the water gap, Durbin said.

“We made a significant contribution as far as manpower as far as clearing the area before we put the game fence in,” Durbin said.

The Fort Bend County Drainage District also made additional improvements by removing an 8-foot chain-link fence and replacing it with piping to improve flow and reduce debris, Patterson said.