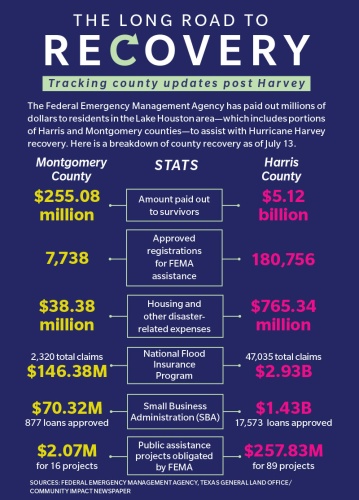 One year after Hurricane Harvey dropped 1 trillion gallons of water on Harris County, many Lake Houston-area homeowners and business owners are still recovering from the damage inflicted by the storm.

Myriad problems—such as a lack of funding to pay for repairs and a short supply of contractors to assist with reconstruction—has slowed the recovery process, Houston City Council Member Dave Martin said.

Martin said his office estimates more than 17,000 homes and 5,000 businesses flooded in the Lake Houston area last August after record rainfall and water from Lake Conroe, Spring and Cypress creeks and other tributaries of the West Fork of the San Jacinto River caused widespread flooding throughout the area.

While residents are still rebuilding homes and businesses, public entities are also recovering from the flooding. Kingwood High School and the Kingwood Branch Library reopened this year, but there are other public facilities still under reconstruction in the Lake Houston area, officials said.

“We’re coming back, but of course everybody would like to see it come back quicker,” Martin said.

The pace of recovery for homeowners in the Lake Houston area has varied depending on numerous factors, such as whether they were able to hire contractors—which has been difficult for many residents because of the high demand—or if they have flood insurance, Martin said.

He said he estimates less than 20 percent of homes that were damaged in the Lake Houston area have been fully rebuilt since Harvey. He said some homes are mostly rebuilt but are missing pieces like furniture or appliances, while other homeowners still have a long way to go.

“There were a lot of people caught without flood insurance,” Stuebe said. “We still have people [who are] living in RVs and alternative housing ... and they are ready to move on.”

Another neighborhood that flooded during Harvey is Belleau Wood, which is located off FM 1960 between Humble and Atascocita. Arianda Hicks, treasurer of the Belleau Wood Civic Club, said 36 of the 40 homes in the neighborhood sustained damage during the storm.

Most residents who flooded in the neighborhood are still rebuilding their homes, but the pace of recovery varies per resident, she said.

Some people were able to recover quickly because the damage was minimal or they were able to hire contractors; however, Hicks said she and many other residents were unable to hire contractors and have been forced to rebuild themselves. Additionally, other residents are just now starting to rebuild after almost one year of dealing with insurance claims.

While rebuilding, many residents—including Hicks—are living in trailers parked in their yards or driveways. Hicks said her home is built on stilts that raise her house 10 feet off the ground, but it still took in 3 feet of water, which damaged every room in her house.

Not all of the neighborhood’s residents decided to rebuild. Hicks said more than six homes have been sold or have gone up for sale since last August, while other residents have abandoned their homes and moved elsewhere.

“When you’re talking about people who have lived here for 40 years; they don’t want to leave, but they can’t deal with the stress,” Hicks said. “They are retired, [and] they don’t have the energy and resources to keep rebuilding.”

Along with homeowners, the Lake Houston area business community took a hit last year during Harvey.
Most of the 64 businesses that closed in the city of Humble after Harvey have reopened, Stuebe said. Since last August, 52 businesses have reopened, four are working on repairs, seven permanently closed and one closed for reasons unrelated to Harvey.

For the businesses that still remain closed, funding has been the most significant challenge, Armstrong said.

“It’s taking a while to get funding sources available to businesses,” Armstrong said. “And the longer [businesses] are away, the harder the comeback.”

One business that is still rebuilding is Raffa’s Waterfront Grill located on Lake Houston at Kings Harbor. Owner Tony Raffa said the restaurant took in 5 feet of water during Harvey, which ruined furniture and equipment, and damaged the building’s floors and walls.

Raffa said he secured a $200,000 loan from the Small Business Administration and received insurance money to help rebuild his business, but it was not enough to cover the $700,000 in damage the restaurant sustained.

Raffa said he briefly considered relocating after Harvey but quickly changed his mind after deciding he wanted the restaurant to be part of Kingwood’s recovery. He said he plans to reopen Raffa’s Waterfront Grill on Oct. 1.

“Day-by-day, we saw the light a little bit more, and kept our hopes alive that we were going to get everybody back and running,” Raffa said.

Over the past year, progress has also been made on public facilities that flooded during Harvey. Herman Sanders, Harris County Engineering Department spokesperson, said 89 facilities maintained by Harris County Facilities and Property Management sustained damage last year, of which 76 have been rebuilt, 10 are still being rebuilt and three will not be rebuilt.

The Kingwood Branch Library reopened May 29 after $1.5 million in renovations. However, the future of Baldwin Boettcher Branch Library, which is located on Aldine Westfield Road, is still undetermined, said Edward Melton, Harris County Public Library director.

The library—which is located within a flood plain—took in 5 feet of water during Harvey, which damaged $916,253 worth of technology, books, furniture and supplies, Melton said. Plans to rebuild the library must include flood prevention strategies that have to be approved by the Federal Emergency Management Agency.

Melton said the library system is working with engineers to create the plans, which will be presented to FEMA within the next three months. If the federal agency approves the plans, reconstruction would start soon after. If FEMA does not approve the plans, the library may have to be relocated.

During Harvey, 113 classrooms were flooded at LSC-Kingwood, Persson said. The college was able to open nine classroom spaces soon after Harvey, but most classes were shifted to online.

After renovating some of the campus and bringing in temporary classroom spaces, LSC-Kingwood staff secured 40 classroom spaces for the fall semester, which begins in August. Persson said the college plans to have all of its 113 classrooms available for the 2019 spring semester in January.

“We still have a long way to go,” Martin said. “And part of that is making sure we have projects in the event we have another Hurricane hit our way.”