Harris County, schools plan for flat tax base in the wake of flooding damage to properties 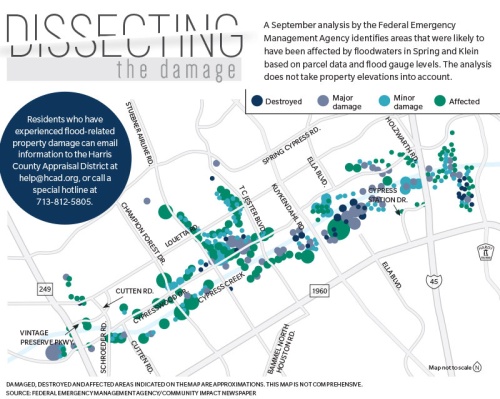 The annual process of assigning new property values to more than 1.7 million parcels of land in Harris County began Jan. 1, but the process has been complicated this year by flood damage that affected thousands of buildings, including many along Cypress and Spring creeks.

As many as 144,000 homes in Harris County may have flooded during Hurricane Harvey, the Federal Emergency Management Agency estimated, which could result in lower appraisals and less property tax revenue collected by taxing entities in the county.

How that damage affects property values countywide remains to be seen, said Jack Barnett, chief communications officer for the Harris County Appraisal District, the entity that conducts the reappraisal process each year. However, property tax revenue for taxing entities in Harris County, including Spring and Klein ISDs as well as the county itself, could be affected if there are significant losses of value.

“I am always pulling out my crystal ball this time of year,” SISD Chief Financial Officer Ann Westbrooks said of the budget process. “It’s a little more cloudy than it ever has been before because of Hurricane Harvey.”


Reappraisal after a disaster

The annual HCAD appraisal provides a snapshot of a property’s market value on Jan. 1, Barnett said. Property owners are notified when the appraisals are complete and have an opportunity to file disputes if they disagree with the valuations.

“We look at all that [property damage] information when we do the annual appraisal and take that into account when setting the new value for 2018,” Barnett said.

He said residents can continue to let HCAD know about property damage and it will take the information into consideration. He suggested residents keep any documentation that would support their claims, such as insurance claims, photographs and other records of damage.

Property value notices are sent out to homeowners around the end of March and beginning of April, Barnett said. Homeowners can protest those values before the deadline on May 15. Homeowners could receive new values if an appraisal review board determines their complaints to be valid.

The Harris County budget department is planning for 2018 revenue to be about the same as it received the previous year because development and growth in the county may offset other losses, said Jim Robinson, senior director for special projects with Harris County Budget Management Department. However, increases in the cost of doing business could make it harder to stretch those funds, he said.

“[The HCAD] chief appraiser told our staff the best guess is the total amount of value would be pretty flat,” Robinson said.  “At this stage we feel like the safest approach is to consider that the total would be about the same as 2017.”

Robinson said the budget includes many variables, such as the cost of indigent health care, which also rises each year. The county’s hospital district, Harris Health System, provides health care to uninsured patients and is funded by property tax revenue.

“Probably a third of all taxes go for operation for the Harris Health System,” Robinson said.

Although SISD and KISD officials said they do not anticipate significant revenue losses, the districts’ financial chiefs said they will also have to contend with the possibility of a flat or less robust tax base alongside rising costs.

Westbrooks said she is planning with the assumption that there will be no change in taxable values in the district, but SISD will not receive certified estimates of value until April 30. The fiscal year in SISD ends June 30, she said, giving the district slightly less time for planning than districts such as KISD, which ends its fiscal year Aug. 31.

“We’ve had quite a bit of an increase in the last several years, so to come in with a flat value is hopefully being conservative, but we’re at least planning for the fact that there’s going to be likely some impact that comes from Harvey,” Westbrooks said.

Westbrooks said the district could dip into its $100.5 million general fund balance—the amount it keeps in reserve—if expenses outweigh its revenue this year.

KISD Chief Financial Officer Dan Schaefer said the district initially expected a 5 percent increase in taxable value for the 2018-19 year but has dropped that expectation to about 2 percent based on reports of where damage has occurred in the district, which includes several heavily flooded neighborhoods.

Schaefer said tax base losses experienced by the district will be made up by increases in state funding.

Schaefer said any cuts in the budget will be made with an eye to preserving classroom resources.

“We’re definitely making sure whatever we do does not impact students, so anything we can do to create a positive impact on student performance we’ll continue to do,” he said.

Although the amount by which property values could drop as a result of Harvey is largely unknown, trends in the real estate market can sometimes influence how values change in a community, said Debbie Cartwright, an attorney who heads the property tax initiative with the Austin-based Texas Taxpayers and Research Association.

“It’s important to remember the appraisal district bases its values on sales information,” Cartwright said. “A lot of it has to do with the market.”

“As of right now, we’ve got a stable market,” Brown said in January.  “I’m selling, and things are not lowballing. … We’re not hurting.”

Texas law requires a seller to indicate whether a home has ever flooded. However, according to data from the Houston Association of Realtors, single-family home sales in the Greater Houston area continued to increase in 2017. The number of homes sold increased in 2017 by 3.5 percent compared to 2016, with 79,117 homes sold last year.

RPG President Brad Sondock said it was the first time the shopping centers have flooded, forcing many businesses to renovate.

Although businesses in both shopping centers, including Rao’s Bakery and Bike Barn, have now reopened, and a business—Aqua-Tots Swim Schools—opened this year, Sondock said he hopes HCAD will take flooding damage into consideration when determining property values.

“The taxing authority should be more sympathetic to property owners who have been affected for 2017,” Sondock said.

Editor's note: In the graphic information accompanying this story, Northwood Pines is mentioned as a neighborhood affected by flooding. While the neighborhood was evacuated by the Harris County Office of Homeland Security and Emergency Management on Aug. 28, residents report that the neighborhood itself did not flood.