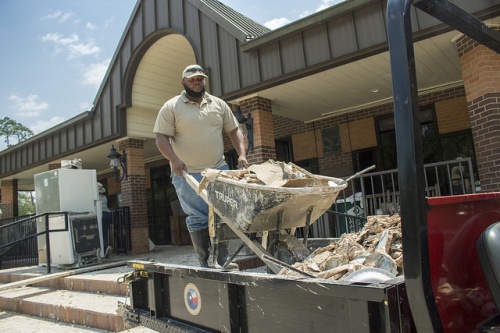 Mercer Botanic Gardens could reopen this winter after Hurricane Harvey-related flooding destroyed portions of the 385-acre park, but officials said longterm plans for the site include developing a plan to rebuild at a higher elevation.

Last year the nonprofit bought 10 acres for about $900,000. The Mercer Society contributed $450,000 and Harris County Precinct 4—which operates the park—matched that amount, Esser said. The county will again match the fundraising group’s contribution, she said.

This week, two events will help to kick fundraising into high gear. Esser said The Mercer Society is encouraging its supporters to donate on Giving Tuesday, an annual event that encourages donations and volunteerism. The nonprofit's Facebook page states a goal of $15,000 for Giving Tuesday.

“Even if people give us $2 that’s fine, we just want people to help us rebuild,” Esser said.

The Mercer Botanic Gardens gift shop, destroyed by flooding, will also open this week at 400 Main St., Spring, she said. The goal is to have the shop open by Dec. 1, she said. Proceeds from sales at the shop help to support The Mercer Society.

The Mercer Society’s efforts to acquire more land to expand and mitigate flooding began after the 2016 Tax Day flood, but this year’s flooding was even more destructive, Esser said.

“We are working with landscape architects to come up with a scheme that would create new detention areas in order to mitigate and build up the garden high enough to be out of what might be a normal flood event,” Duling said.

Duling said park officials and workers were met with a devastating sight when they returned to the park after the stormwaters began to subside in late August.

“We walked in that Thursday morning when the waters were low enough, and we were in a state of shock,” Duling said. “Everything was tossed around like confetti.”

The longterm damage to plants and trees at the site are not yet known, because rotted roots and yet-unidentified plant diseases could still be at work on the grounds, he said.

“On the bright side, we were able to save plants that were in the nursery that were carried downstream,” Duling said.

About half of the greenhouse contents were recovered, he said. Plants for the gardens and for the center’s annual plant sales are grown in greenhouses on the site.

A partial reopening of the park is expected this winter, although the visitor center will not be open until summer 2018 and limited restroom facilities will be available until then. The adjoining Mercer Arboretum on the west side of Aldine Westfield Road also sustained damage but has reopened.

“Everything is going to be scaled down a bit except for the gardens," Duling said. "The areas that will be open will be as beautiful as they were before."

Christopher Shelton contributed to this report.