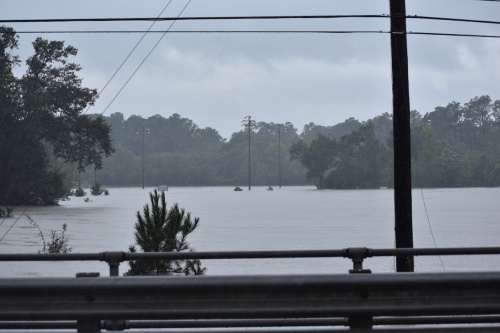 Cypress Creek was among the bodies of water in Harris County affected by flooding during Hurricane Harvey in August.

Harris County Judge Ed Emmett said on Sept. 14 that although the county is still recovering from flooding caused by Hurricane Harvey, it also must decide what steps it will take to mitigate potential future flooding. Here is what Emmett said about the recovery process, the possibility of a third Harris County reservoir and the challenges the county faces in the future.

Where is the county in the recovery process after the flood?
The three main things are: number one, getting the debris picked up. Inside the City of Houston, the city has got a contract with a company; and outside the city limits, the county has a contract. County commissioners are working diligently on this. One issue that arose early on is that most of the contractors basically use trucks from all over the country. And when Hurricane Irma started heading towards Florida, then those trucks started deciding, ‘Well do we want to go to Texas or do we want to go to Florida?’ The county, about a week and a half ago, amended our contracts so that basically we would pay enough money to make sure they came here and didn’t abandon us. The trucks are here, but you can never have enough trucks to pick up the debris. If two or three weeks from now, people don’t have the debris picked up, they aren’t going to be happy. And we get that.

And the second part is, the people who are out of their homes need to get back in as soon as possible. And that’s the whole FEMA [Federal Emergency Management Agency] structure. So, we were able to set up the three megacenters for FEMA and SBA [Small Business Administration] in Katy Mills Mall, Greenspoint Mall and Baytown Community Center. This week others are opening throughout the county. And then there are going to be some mobile sites where FEMA will go into communities and try and help people. The magnitude of this is such that FEMA is just going to take a while to get to everybody, and that is unfortunate.

Third thing, of course, is the whole question of buyouts. If somebody is in an area that we are relatively certain they’re going to be bought out, then it doesn’t make any sense to rehabilitate a home that’s going to be bought anyway. We are trying to identify those as quickly as possible.

Who is in charge of the buyout process?
It’s FEMA money that facilitates buyouts, but it will be the Harris County Flood Control District that comes in and decides which areas are more flood-prone. And it’s not just flood-prone, it’s which areas don’t have a project that is going to relieve their flooding. In other words, a lot of them along Brays Bayou may have flooded three times, but as soon as the Brays project is completed then a lot of those homes will be out of the floodplain. And we need to take that into consideration.

How many homes were damaged in the flood?
[It's] too early to get any sort of number, but obviously we're talking tens of thousands.

What sort of plans are being discussed to help mitigate future flooding?
There has been a proposed third reservoir on the drawing board going all the way back to the 1940s or '50s. It was never built. Well, now is probably the time to look at that one in the Cypress Creek watershed. That would almost certainly be an [Army] Corps of Engineers project, and I know people always hate to hear this—I hate to hear it—but some of these things have got to require congressional action for funding.

We’re going to have to take a serious look at every proposal out there, but my personal priority would be to identify all the projects on the watershed we already have planned, Brays [Bayou], Hunting [Bayou], White Oak Bayou and get those funded. Because the way those get built is we [Harris County] spend $60 million a year and then we get reimbursed by FEMA. Well, that’s not enough money.

So, I would like [the U.S.] Congress to come up with a way to frontload the money from FEMA so that we can get those done and completed. And then the third reservoir seems to be one of those projects that almost everybody agrees, if it’s not a good idea, then it is certainly worth looking at. We need to get on that right now and make a decision. And Congress needs to fund it.

Who ultimately makes the decision for a third reservoir?
[The Army] Corps of Engineers. Now if the corps says it’s a good idea, but they can’t fund it, then we might have to look at it through the Harris County Flood Control District point of view. But if we do that, we are talking about a lot of money, and unfortunately, in the state of Texas, counties only get property tax money and there is a limit.

Obviously, property tax is one of the most unpopular taxes, which is why for years I’ve been saying we need to be sharing in the sales tax with the City of Houston. If the city isn’t going to annex all of these areas ... then a lot of that money needs to come back, because unincorporated Harris County is itself now a major urban area. We’ve got almost 2 million people living in unincorporated Harris County, which is almost as many as living in the City of Houston. We’ve got to change the way we finance and govern the unincorporated part.

How would a third reservoir get funded?
First and foremost, Congress. That’s who built the first two reservoirs, that’s who funds the [Army] Corps of Engineers. If that doesn’t come forward—if that has to come from the state or local government—then state government could do it. They have not done that kind of thing in the past, but this could be extenuating circumstances.

And if the state doesn’t do it, if they have to go on the county, then the only way to do it is through a bond issue approved by the voters that would give more property tax revenue to the Harris County Flood Control District.

Why are flooding events occurring more frequently?
As to why we’ve had three 500-year events in two years, you know I’m describing it as a new normal. I don’t know how you can say it’s a 500-year event when three of them have occurred in two years. I mean based on that we shouldn’t expect another one of 1,500 years, but I don’t believe that’s true.

What is the solution?
You can’t fix it, we live in a flood-prone Gulf Coast area. So, the question is, ‘How do you mitigate flood waters?’ And that’s what we are talking about, we’re talking channel improvement in the watersheds, talking about a third reservoir and remember, we didn’t get hit by a hurricane this time. The areas that didn’t flood are the areas along the coast, and those are the areas where if a hurricane comes, they get inundated with storm surge.

So, you’ve got a lot of people who are saying this is more proof we need to build a coastal barrier. Well, that’s a whole separate issue, but that’s needed too. And all of those things cost money and the public is going to have to decide what are they willing to pay for.
SHARE THIS STORY