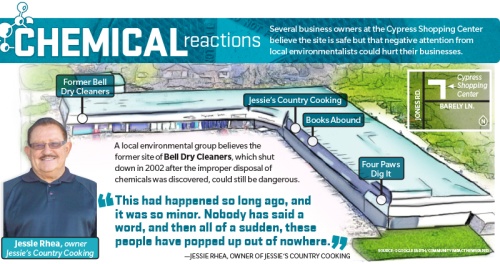 A decades-old Cy-Fair environmental case is garnering new attention as local advocates push federal government officials to take further action on a site that has already been deemed safe by the U.S. Environmental Protection Agency.

Cypress Shopping Center, which is located north of FM 1960 at 11600 Jones Road in Houston, was placed on the National Priorities List 16 years ago under the federal Superfund program for hazardous waste sites that pose environmental risks and a threat to public health.

The contamination source was the former Bell Dry Cleaners, which operated at the shopping center from 1988-2002. According to the EPA, the cleaners improperly disposed of harmful chemicals, contaminating groundwater in the area. The EPA has implemented several remediation projects since and declared the site safe for businesses to operate.

However, activists with nonprofit Texas Health and Environment Alliance said they believe the site is not as safe as the EPA suggests and have asked for the shopping center to be shut down altogether.

THEA spokespersons claim contaminants at the site have led to an uptick in cases of cancer and other illnesses in surrounding neighborhoods.

“The practice there was to go out back and to dump their dry-cleaning solvents,” THEA founder and Executive Director Jackie Young said. “That was not an acceptable practice, but it’s what they did.”

Business owners at the center have found themselves caught in the middle. Many said they believe the site is completely safe but are concerned THEA’s messages are harming their businesses.

As of this summer, 11 businesses operate out of the center, according to Jessie Rhea, who said he has managed the property for about 25 years. This includes a nail salon, restaurants, a bookstore, an auto repair shop and a real estate office.

Rhea said the EPA has worked hard to protect business owners and address any questions or concerns they have had over the years. Additionally, he said officials regularly test the air, water and soil quality at and around the site to ensure safety.

“There’s nothing wrong here,” he said.

Established by Congress in 1980, Superfund allows the EPA to clean up toxic sites such as manufacturing facilities, landfills and mining sites. Cypress Shopping Center is the only federal Superfund site in Cy-Fair, according to the EPA.

As part of a commercial real estate transaction, a June 2001 site assessment found a machine at Bell Dry Cleaners was leaking into storm drains behind the facility.

Subsequent samplings identified toxic chemicals in the groundwater. Through inhalation, ingestion and absorption, these chemicals can damage the developmental, neurological, immune and reproductive systems, according to the Agency for Toxic Substances and Disease Registry.

Raji Josiam, the remedial project manager for EPA Region 6, said the affected groundwater, also known as a plume, is present in both shallow groundwater under the shopping center and in the Chicot Aquifer—one of the three primary aquifers supplying water to the Houston-Galveston region.

“There has been a successful reduction in the shallow groundwater plume due to bio-remediation injections conducted by EPA in 2016 and 2018,” she said. “The plume in the deep aquifer is in the water line service area and drilling restriction area and is currently stable and not migrating.”

In January 2003, the Texas Department of Licensing and Regulation established a water well drilling restriction boundary around the site to prevent cross-contamination.

From August 2003 to May 2008, the Texas Commission on Environmental Quality collected soil, groundwater and vapor samples to determine the extent of contamination, which led to the EPA installing a water line to provide safe drinking water to nearby homes and businesses in 2008.

About half of homeowners agreed to participate in the voluntary government-funded program, and 144 water line connections were made.

According to Young, the contaminants of concern are odorless, colorless and tasteless, so residents would not necessarily realize when they are present in their drinking water.

“If someone’s knocking on your door  and gives you this option to go onto city water when you don’t believe anything’s wrong … why would you want [to participate] unless it was really truly clearly explained to you about the potential adverse health  effects?” Young said.

The other half of residents in neighborhoods, including Evergreen Woods and Edgewood Estates, continue to use private wells.

She said residents who are still relying on private wells for domestic use within this boundary should allow the EPA to plug the wells to prevent migration and hook homes up to the public water line, which is serviced by the White Oak Bend Municipal Utility District.

In a 2010 Record of Decision, the EPA recommended the groundwater be pumped and treated, a process which Josiam said could take up to 30 years. The agency later shifted its focus to limiting contaminants in the soil instead.

“[R]educing and removing the sources to the underlying groundwater is a faster process than if the groundwater was cleaned up pumping and treating alone,” Josiam said.

An indoor exhaust system was installed in three suites within the center in 2017 to remove contaminants that had migrated up from the soil. Sampling has since shown contaminant levels in the indoor air have returned to safe levels, according to the EPA.

The EPA finished installing a soil vapor extraction system behind the facility in July. Josiam said it will operate for up to two years to further remove contamination sources in the groundwater and prevent additional indoor air contamination by extracting them from the soil.

Young’s mother, Pamela Bonta, who also works with THEA, said with the help of area graduate students she has gone door to door in neighborhoods outside of the designated plume to survey residents about their health issues and to inform them about the Superfund site.

“I’ve been going past the admitted plume for a very good reason—because I honestly feel that it has spread,” she said at a June 23 THEA meeting intended to educate the public.

Mancino said she was not informed about the Superfund site when she purchased her home in 2003. She did receive a letter in the mail years later about the ongoing investigation at the site, but she said she had no reason to believe there was cause for concern.

Because Mancino’s street is located outside of the designated water line service area, she said she could not take advantage of the voluntary water line program.

Since her home and many others are still connected to private wells, she said she would like to see the EPA test wells in her neighborhood to ensure chemicals have not migrated.

“I don’t see how they could think that it could have somehow miraculously separated out all those chemicals, and it makes sense to me to think that a lot of the illnesses in this area have probably had something to do with that,” she said.

Josiam said she is aware of community concern about high cancer rates, but the areas of concern are too far from the site to draw any correlation.

Several of Mancino’s neighbors have had cancer—including her mother, who moved in next door 11 years ago, she said. If she had been within the boundary, she said she would have made the switch.

“If I had known the magnitude of how horrible this chemical is and that it was in the groundwater—which would have told me it’s in my water that I’m drinking every day and bathing in and absorbing into my body—I would have immediately switched,” she said.

Rhea, who also owns Jessie’s Country Cooking at the site, said he believes the problem was resolved more than a decade ago once the Cypress Shopping Center was taken off well water and was given public water hookups in 2008.

“This had happened so long ago, and it was so minor,” Rhea said. “Nobody has said a word, and then all of a sudden, these people have popped up out of nowhere.”

While no legal action had been taken as of press time, Rhea said he was in talks with attorneys to file a lawsuit against Bonta and Young in an attempt to put an end to their communication of what he believes is false information.

Representatives from THEA have said they would like to see the EPA pay to relocate businesses from the shopping center, but Josiam said that is not necessary in this case.

“EPA’s preference is to address the risks posed by the contamination by using well-designed methods of cleanup which allow people to remain safely in their homes and businesses,” she said.

Other business owners in the shopping center said they have never experienced health issues that could be connected to these chemicals, and they believe they are working in a safe environment. However, they believe because of claims being made by representatives from THEA, their businesses could suffer.

Jeffrey and Laura Otto opened Books Abound 22 years ago—when Bell Dry Cleaners was still operating. Even when the problem was first discovered, Jeffrey Otto said the situation caused little disruption to him or the bookstore.

“I more or less ignored it. It was no big deal to me,” he said. “We just didn’t pay any attention to it. We were trying to get a business up and running, and that was not our concern.”

EPA officials have told business owners air and water sample results show the site is safe, according to the Ottos.

“We’ve been informed there’s nothing there. It’s all cleaned up,” he said. “To me, it’s just cleaning clean dirt and air.”

In 2006, Tammy Kubicek opened her pet grooming and boarding business, Four Paws Dig It, at Cypress Shopping Center because of its proximity to residential neighborhoods.

As of late July, Kubicek said she had at least seven customers ask about the Superfund site following media attention and public meetings held locally. If she thought there was a threat to her family’s health or to the safety of her clients, she said she would have relocated years ago.

“It was a great location when I walked in here, and it still is,” she said. “I’ve worked really hard to build my business … and I don’t wish to lose it over something that had nothing to do with me.”