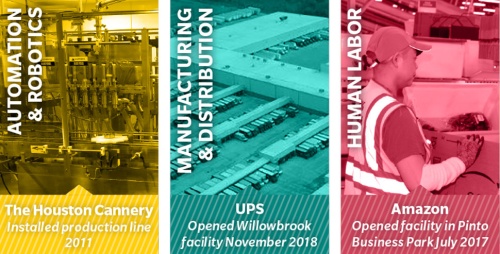 Technology advancements are driving the creation of large manufacturing and distribution centers across the Spring and Klein area, which are hiring more workers.

Updated 9:13 a.m. Sept. 3: This article originally referred to The Church of Latter-day Saint’s. The correct name of the church is The Church of Jesus Christ of Latter-Day Saints.

The Spring and Klein workforce must adapt to changing skill sets while accommodating for the area’s growing manufacturing presence—enabled in part by advances in automation, local business leaders said.

Manufacturing is among the industries with the highest automation potential, or the percentage of tasks that can be carried out by today’s automation technologies, according to a January report by the Metropolitan Policy Program at the Brookings Institution, a Washington, D.C.-based public policy group.

The Greater Houston Partnership, a business advocacy association, estimates manufacturing accounted for 10.3% of jobs in the Northwest Houston area, which includes Spring and Klein, in the fourth quarter of 2018.

However, automation advances likely will not displace manufacturing jobs but rather drive productivity and allow for the creation of new mega distribution centers, which in turn hire more workers, said Bobby Lieb, president of the Houston Northwest Chamber of Commerce.

“It means a transfer of jobs,” Lieb said. “[We’re] gaining in our distribution and warehouse and wholesale.”

Manufacturing and distribution centers that opened within the past year in north Houston include the UPS Willowbrook Center and The Home Depot on Kuykendahl Road, while Amazon’s Fulfillment Center at Pinto Business Park opened in July 2017. In May, Champion Fiberglass broke ground on a third production line at Spring Stuebner and will be fully operational by fall.

Grocer’s Supply is also consolidating into a new 727,600-square-foot facility at Woodham Drive, a Coca-Cola Co. bottler will open in Pinto Business Park in 2020, and more than 20 million square feet of industrial and logistics space is planned near George Bush Intercontinental Airport and the Beltway 8 corridor, according to 2018 report by Population and Survey Analysts, a demographics firm.

Meanwhile, local schools are preparing students for the growth in automation by integrating coding and creative problem-solving skills into classroom curriculum.

“We need to make sure that our students are adequately prepared ... to enter into a different kind of job market,” Klein ISD Superintendent Jenny McGown said.

Entire regions as well as individual occupations will be affected to varying degrees by advances in automation, according to the Brookings report. The study said Harris County has an automation potential between 46%-48%—a number that indicates the vulnerability to change in job structure rather than job loss, report co-author Mark Muro said in an email. The report estimates manufacturing has a 59% automation potential globally.

Following a lag after the 2014 oil and gas downturn, employment in the manufacturing sector in northwest Houston is picking up steam, Lieb said.

“We’re losing retail jobs, but we’re gaining those back in our distribution and warehouse and wholesale jobs because the nature of retail is changing,” he said.

Across the Houston-The Woodlands-Sugar Land metro area, the manufacturing industry gained 17,100 jobs, or a 7.6% increase, from February 2018 to 2019, according to a March report by Workforce Solutions, an employment agency. Meanwhile, retail employment dipped by 1.5%.

Lieb said the closing of Performance Bicycle on FM 1960 in January is an example of an industrywide trend.

“A couple mechanics that were working in the back said … ‘We’re going to go work at the new UPS [Willowbrook] factory,’” he said. “So, they went from retail to a distribution center.”

“People think it takes jobs away from humans; it actually doesn’t,” Beadle said. “We have 1,500 employees here, so it is still quite a large human-driven operation.”

Despite the robots’ proficiency, Beadle said she does not anticipate the process becoming fully automated in her lifetime.

“With the humans and robots together, it’s more efficient,” she said. “Humans still have to make some of those decisions that robots can’t.”

While automation enables the creation of mega distribution centers, other businesses in Spring and Klein, from small canning factories to the health care industry, are also touting production gains.

The Church of Jesus Christ of Latter-Day Saints' The Houston Cannery, a peanut butter factory on Hafer Road, produces 1 million 16-ounce jars of peanut butter each year, which it distributes to Feeding America, a nonprofit organization.

After investing in its automated production unit in 2011, the facility further increased its output capacity by 33% from the manufacturer’s recommended output by making minor adjustments, Polis said. For instance, installing extra sensors eliminated jars from turning upside down and spilling peanut butter, which used to happen about three times each production cycle.

On a larger scale, the health care industry has taken automation and mechanization one step further by introducing robotic surgery technologies. Hospitals in Spring and Klein are using robots not so much to replace tasks but rather work alongside them, local surgeons said.

“This is teamwork,” said Dr. Alexander Mohr, the medical director of orthopedics at CHI St. Luke’s Health-The Vintage. “We still are driving this bus, and if we stop driving the bus, I’ll start flipping hamburgers [because] I will not watch the robot work.”

At Amazon, employees are largely hired based on their adaptability and drive to succeed, Beadle said.

“We’re not as crazy about, ‘You have to have a college degree,’” she said. “We’re more about, ‘How is this person as a person, as an employee?’”

Lieb said local businesses leaders have told him they are more apt to invest in employee development rather than technological innovation.

Still, local school officials said educating students in robotics and automation technologies is critical. Lone Star College-University Park rolled out its mechatronics degree, or automated manufacturing degree, in 2017, said Steve Khala, the dean of workforce education for the Lone Star College System. About 200 students graduate from the program each year.

In addition, Spring, Cy-Fair and Klein ISDs all offer robotics clubs, and KISD has begun integrating coding in the classroom through its elementary curriculum, McGown said.

“[Coding] cannot be considered anymore an addition to the curriculum,” she said. “It has to be fully integrated.”

Meanwhile, coding and STEM schools are opening across Spring and Klein, such as TheCoderSchool, which opened in May on Rayford Road, and Code Ninjas, which opened its second Spring location in June on Spring Cypress Road. The School of Science and Technology, a free public charter school, is slated to  open a new campus on Louetta Road in August.

Other schools, such as the American Robotics Academy in Spring, teach children how to build robots, which allows them to learn math, physics and coding skills simultaneously—which McGown said are key skills for young adults entering the workforce.

“We have to continue to do even more [coding and robotics] in education so that when our students graduate, they’re going to have a whole different skillset that’s needed for the future of work,” she said.