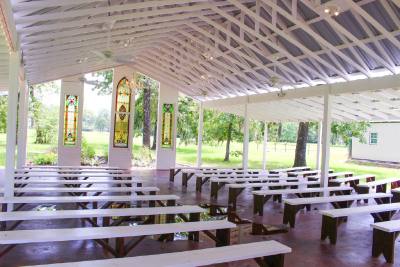 Located on a 10-acre property west of Oak Ridge North, TownHall Texas features a variety of rustic amenities put in place by owners Carey and Jana Jordan to offer a unique wedding or event experience.

Stephanie Jordan, venue director of Town Hall Texas and the daughter-in-law of Carey and Jana, said the business is family-owned and opened in 2005 as a place to host small concerts before becoming a successful wedding and event venue.

“We kind of fell into doing this,” Jordan said. “My father-in-law had a band who wanted to practice here, and it turned into having open mic night and small concerts here. Then people wanted to get married and do birthday parties here. It’s been about seven years that we’ve been doing the wedding thing.”

Now, Jordan said the venue has become a popular spot for weddings and usually hosts about 55 to 75 ceremonies and receptions per year, with November being the most popular month to host events.
The venue also hosts other events, including corporate, birthday and graduation parties. While TownHall Texas is located in The Woodlands area, Jordan said they have hosted events for customers from as far as Katy, Richmond and Pasadena.

Jordan said the venue offers four ceremony sites for weddings, and customers have free reign of the entire space. A 3,000-square-foot climate-controlled barn is also located on-site for receptions.

The wedding ceremony sites at the venue include a palapa, which is an open-sided structure with a thatched roof, commonly seen on Mexican beaches. Couples can also choose between a white chapel, a gazebo and a Western town structure.

“Our chapel is quickly becoming our most popular and largest ceremony spot,” Jordan said. “We’re planning ahead for some possible expansions on this one, and we can probably fit about 190 people in here with the benches we have. We have a lot of people who do their ceremony out here who don’t necessarily belong to a church. So it kind of gives them the church feel but also the rustic feel with the open walls. It’s very unique.”

In addition to the four ceremony sites, Jordan said the venue also features a saloon area that is used as a bar area for outdoor receptions or as a space for different types of parties. A groom’s cabin is also available on the property and features a kitchenette and pool table, while the bridal cabin features a full kitchen and dressing room.

Jordan said a sheriff’s office is also located near the saloon that features a jail cell for couples to take humorous photos in during a wedding.

“If the bride and groom have a good sense of humor, they usually get pictures in the jail cell,” she said. “There’s not a lot of places like this for people who are looking for the really rustic feel. A lot of people are looking for the more rustic and more casual. I think people like how casual it is.”

Jordan said what also makes TownHall Texas unique is how flexible the business is with events and planning.

“We like to let people know about our flexibility because there’s not really a lot we’ve said, ‘no,’ to,” she said. “We are both an event venue and a wedding venue, so we have different rates and offer different options. So that makes it easier for a lot of people.”