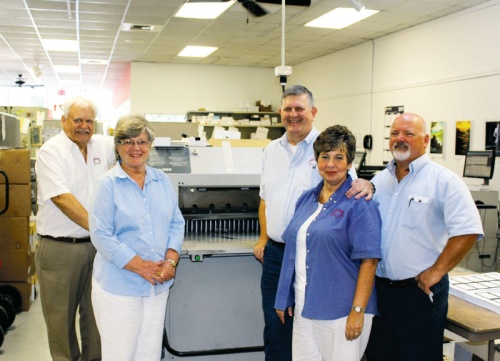 Husband and wife Chuck and Diane Nott can attest to how the printing industry has evolved over the 39 years they have owned Lone Star QuickPrint. Chuck said the store has adapted to changes in its customer base and production process while continuing to find a niche to serve.

For example, Chuck said, when the store first opened, almost everything was printed by a traditional offset press—which can print only in one or two colors. However, now more than half of the work is printed by a large, digital full-color printer.

The store has shifted away from serving a few large customers to filling many small orders, said Scott Nott, Chuck and Diane’s son. As high-quality printers have become less expensive, larger businesses no longer have to outsource their printing orders, Scott said.

“In the late 70s, large Xerox machines—people didn’t have them in their offices, so they had to come to us,” Scott said.

Lone Star QuickPrint has been operated by the Nott family since 1978. Chuck and Diane work in the store along with Scott, his wife Suzanne Nott and brother-in-law Jim George.

“Family means an awful lot to us,” Chuck said.

Scott said keeping the business in the family has played a role in its longevity, because it allows the Nott family to establish relationships with customers, some of whom they have done business with for more than 20 years.

“I think it’s people knowing that they can come in here and the same people are going to be here,” Scott said.