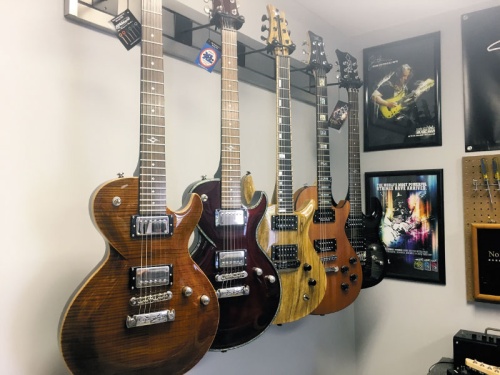 Oak Ridge North resident Mike Nedd, who has been in the guitar repair business for about two decades and has been playing guitar since 1982, used to frequently play in bands as a professional musician, he said.

“About 4 1/2 years ago, I put that down and really concentrated on growing my business instead of having to juggle the two,” Nedd said. “This is the love of my life. I put everything into this [business], and it’s been blessed ever since. I made the right decision. I can do this for the rest of my life.”

He has owned his own business for 13 years and, in addition to doing repair work, he builds guitars and teaches lessons, he said. Nedd’s guitar students range in age from 10 to nearly 70 years old, he said.

Although Nedd has decades of experience with guitars, he said he previously worked in construction.

“I’ve always worked in some kind of construction most of my life,” Nedd said. “I just really got sick of working in the Texas heat.”

“Guitar repair is like when you get your hair cut—people are not going to let you get out of it,” Nedd said.

“I do from the basic repairs, as far as setting up an instrument, all the way to full restorations,” Nedd said.

One unique instrument Nedd constructs is guitars made from cigar boxes, he said. Nedd said he also encourages clients to bring their new guitars by the store to be looked over, even if it was not purchased at Nedd Guitars.

“With as many guitars as are being built nowadays, there is a little less attention to detail,” Nedd said. “Usually, what I’ll tell my clients is, ‘After you buy it, bring it over and let me look at it.’”

During his career, Nedd said he has had the opportunity to work with local musicians as well as internationally known acts, such as Nickelback, Rob Zombie and Billy Gibbons of ZZ Top.

Nedd said he remembers listening to a variety of music growing up, drawing influences from his family members’ tastes in music.

“Ever since I was a kid, we had a lot of different music going on in our house,” Nedd said. “I remember when Van Halen first came out and Cheap Trick, and a lot of that kind of stuff.”

Nedd said he eventually hopes to open a second location in Clear Lake, where he previously lived.

“Once production starts gaining back up, I would like to eventually open up another shop across town,” Nedd said. “We’re concentrating on one thing at a time.”