With colorful flavors and a distinctive shaved ice style, Buzzles owners Darryl Garcia and Marytalia LaSalle Garcia have redefined the snow cone in Spring and Klein.

Unlike what most snow cone consumers are accustomed to, the Spring business combines New Orleans-style snowballs with Hawaiian-style shaved ice to create a finer, creamier ice treat with creative flavors.

Buzzles has more than 100 flavors that can create more than 1,000 combinations that range from apple or bubble gum to mixed flavors that are based on characters, such as Harry Potter, or feature pop culture references.

Darryl and Marytalia said the unique flavors at Buzzles have evolved as each location developed an identity. All three locations have specific themes and different menu options.

The location on Louetta Road was designed to look like a barn, so the duo designed Texas-themed flavors, such as Lone Star, armadillo and Texas sky for the menu. The shack at Bernie’s Backyard features mixed flavors fresh cut grass and sunny day.

Spring and Klein residents are responding to the concept, which has led to rapid growth for Buzzles.

The business began when the married couple left their corporate jobs and purchased a red wagon on Craigslist seven years ago. Buzzles now has three Spring locations, including a storefront on FM 2920 that is set to open in December, Marytalia said. The new storefront will feature an expanded menu and offer hot chocolate and coffee as well.

Just this year Buzzles added a location at food-truck park Bernie’s Backyard in July and moved to a bigger shack on Louetta Road in November.

“We’ve just been lucky enough that some good opportunities have come our way, and we’ve seized the moment,” Marytalia said.

An emphasis on social media has allowed the Garcias to learn directly from customers what flavors they want. Learning of Buzzles’ significant online following—including 8,000 likes on Facebook—emboldened the duo to expand business hours and stay open regardless of season, which has led to more profits, Darryl said.

“We decided we’re going to be open five days a week in the winter,” he said. “[We wanted] to do that for those people [who] had loved us and kept coming back and still wanted a snow cone in January.” 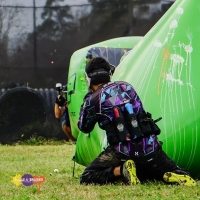