The Wheeler Transit Center in Midtown sits at the heart of where several modes of transportation intersect. A planned University bus rapid transit route would link in riders from Bellaire, Uptown and Montrose areas. (Shawn Arrajj/Community Impact Newspaper)

As the coronavirus pandemic wears on, public transportation leaders in Houston have continued work to advance a long-term vision for the city they said is more important than ever.

Ridership numbers and revenues are down for the Metropolitan Transit Authority of Harris County, but the real story that emerged from the pandemic was one of how essential the agency’s services are for people who rely on them, METRO CEO Tom Lambert said.

“We’ve been carrying about 140,000 riders a day,” Lambert said. “That just really demonstrated the essential service that transit provides to the broader community. That’s something that I think we always knew but has now clearly been demonstrated.”

METRO ridership reports show monthly local bus ridership fell by 40% between June 2019 and June 2021, a loss of roughly 1.9 million riders. Light-rail ridership is proportionally down even more over that same time frame, over which ridership reports note a 47% drop.

The pandemic began soon after voters approved a $3.5 billion bond referendum for METRO in November 2019 to support METRONext, the agency’s 20-year vision plan. The bond was designed around a long-term plan to execute more than 500 miles of improvements through 2040, including several new routes that will complete connections in the Bellaire, Meyerland and West University areas.

Even with the pandemic-spurred ridership decline, local transportation experts said fulfilling those plans remains critical for the future of Houston’s transportation network.

“This is not the time to be questioning whether or not we move forward with things,” said Andrea French, executive director of the Transportation Advocacy Group Houston. “This is a time to definitely move swiftly and make sure that we’re staying connected for our economy and for our quality of life.”

The METRONext plan hits on various methods of improving the public transit system in Houston, including light-rail extensions, local bus route additions, the development of new park and ride infrastructure, and systemwide improvements to bring every METRO facility in line with the Americans with Disabilities Act.

About $3.5 billion will be funded through the 2019 bond referendum, Lambert said. Another $500 million will come from METRO’s budget, and the agency is seeking roughly $3 billion in matching funding from the federal government.

Some of the first large-scale projects to move forward involve connecting existing transit centers with light rail hubs through the use of bus rapid transit routes, a type of dedicated bus service officials have described as “light rail on rubber tires.”

The first of several planned rapid lines began prior to the 2019 bond referendum and was completed in August 2020. Known as the Silver Line, the service connects the Lower Uptown Transit Center—near the city of Bellaire—to the Northwest Transit Center through the Galleria area.

Riders from communities such as Gulfton, Sharpstown and Bellaire will have close access to the line, which will have stops in Montrose, near the University of Houston and at the Wheeler Transit Center in Midtown, which is located within Houston’s burgeoning Innovation Corridor, a 4-mile strip that could develop into a future jobs hub.

“The way that it can transform how people make trips in the region is going to be mind boggling,” said Priya Zachariah, METRO’s project manager on the University Corridor project, at a July 27 presentation.

The METRO board of directors identified the University Corridor as a project to accelerate, meaning a lot of the planning and design is being advanced in an effort to prepare the project for the federal grant process, METRO officials said. An environmental study could kick off later this year or early next year, and construction could start around 2025.

Officials with LINK Houston, an advocacy group promoting equity in transportation, said projects like the University Corridor can work alongside local bus service. Ines Sigel, LINK’s interim executive director, said it can be especially beneficial for residents in neighborhoods like Gulfton, which are densely populated and where many people do not own cars.

However, Sigel said the focus cannot only be on commuters who work from 9 a.m.-5 p.m.

“We need to use public transit for other trips as well ... getting to grocery stores, health care and even to social outings,” she said. “We need to really invest in and create a transit system that is viable for all of these trips and not just in terms of commuting.” 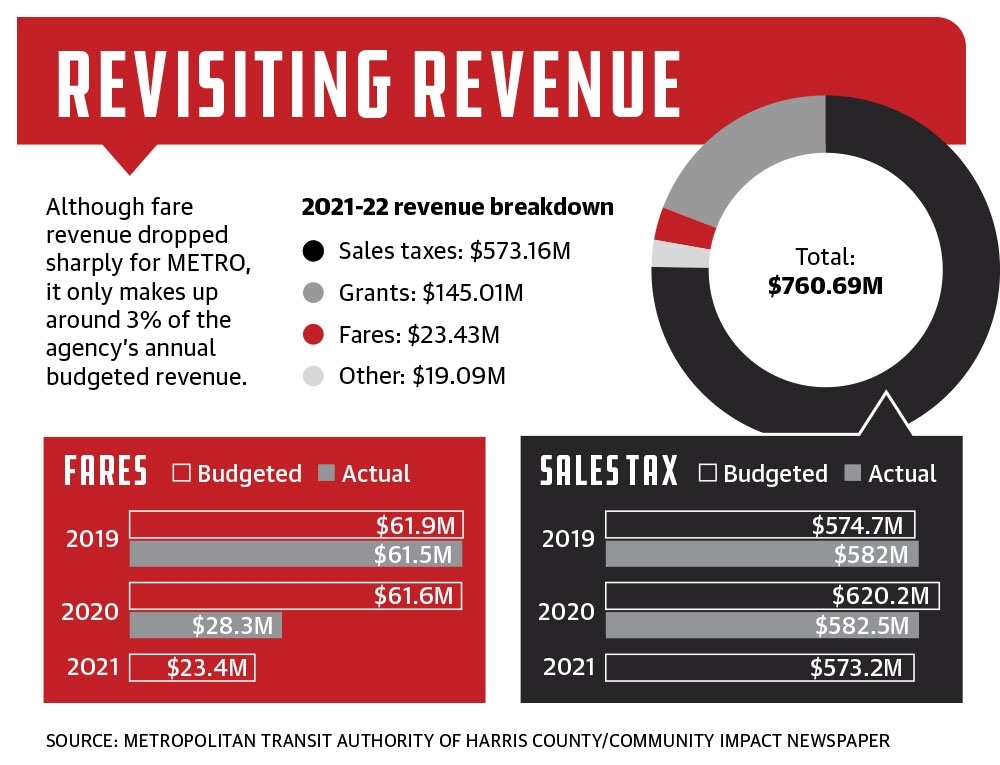 METRO’s ridership drop was in part a byproduct of the agency asking people to only use the system for essential trips, something officials were doing in public communications through mid-May of 2021.

Even with those restrictions in place, monthly ridership totals never dropped below 2 million on local bus routes. According to Tim Lomax, a senior research engineer with the Texas A&M Transportation Institute, this is evidence of how important public transit is for essential workers, especially those who do not have cars.

“I think that the rapid bus routes they have on Westheimer and Bellaire are ones that will appeal to that market also,” Lomax said.

Lomax attributed the drop in ridership in part due to decreased employment in Houston’s downtown areas and the resulting lack of commuters. About 40%-50% of the people who work in downtown Houston get there by carpooling or bus, he said.

However, even if offices permanently reduce the number of days they require employees to be on-site, many workers will still rely on public transit to get around, he said.

“Transit’s role is they have the ability to provide a faster, managed commute,” Lomax said. “There’s still going to be a need for that.”

Because the METRONext plan was devised as a long-term vision, Lambert said timelines of individual projects were not significantly affected by the pandemic. From the start, projects were not intended to begin until financing was secured, he said.

Other major projects include a light rail extension to Hobby Airport and the Inner Katy Corridor, an elevated rapid bus route along I-10 into downtown. Those projects, along with the University Corridor, have high momentum, Lambert said. 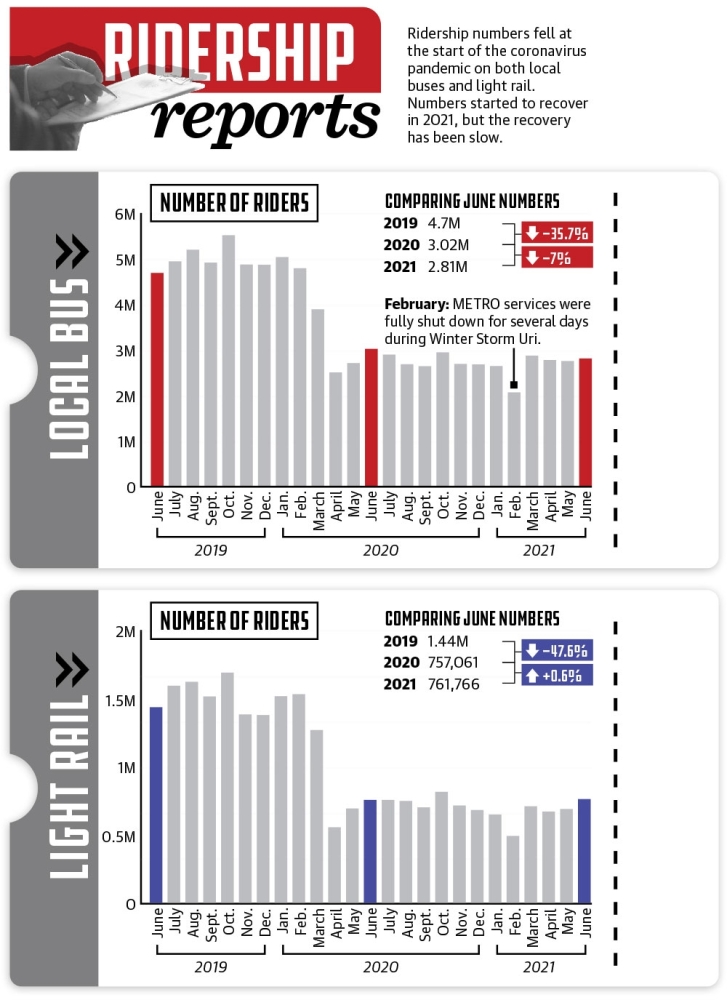 On top of providing people with better connections and more reliable service, the METRONext plan can also be seen as part of a bigger vision in Houston to create more dense “urban villages,” Lomax said, where high-rise mixed-use developments are supported by a stronger transportation network.

Bus rapid transit and light rail are particularly useful in facilitating those kinds of developments because they can attract people who would otherwise not consider public transit as an option, Lomax said. In this context, improving the reliability of public transit is key, he said.

“If the [bus] stops 20 times before you get to where your destination is, that’s a burden,” he said. “If you don’t have a choice, that’s the way you get there. But if you’re trying to attract people or trying to attract changes in urban character, you really need something that feels more like a car.”

Meanwhile, a $1 trillion infrastructure bill—known as the Bipartisan Infrastructure Investment and Jobs Act—is working its way through Congress. Though it still puts a big emphasis on highway projects, French said the most recent iteration of the bill puts a more intentional focus on public transportation as well. If the bill passes, French said it would allow entities such as METRO more ability to start planning some of their more ambitious public transportation projects.

“It frees up a lot of the blockage, for lack of a better word, that you have with projects and planning,” she said. “That’s what the infrastructure bill has for transit agencies—the opportunity to think beyond what’s right in front of you.”

As of press time, the bill had been passed by the U.S. Senate and was being heard in the House of Representatives.

The University Corridor is one of the top candidates to draw down funding from that bill if it passes, Lambert said, as would a proposed light rail extension from Houston’s east end to the Hobby Airport.

“We look forward to what Congress will ultimately decide and making sure that we’re prepared to bring those funds back to what we just found out is the second-fastest growing region in the country,” he said.