The double whammy of a sharp drop in crude oil prices paired with an economic shutdown caused by COVID-19’s spread across Houston was nothing that Houston Realtor Wayne Murray had ever seen before.

“My people ran the gamut from being very very scared to not being frightened at all,” said Murray, the owner of Weichert Realtors-The Murray Group. “It was a rainbow of reactions. I was initially very concerned about my people.”

Those initial weeks in mid-to-late March and early April, after Harris County Judge Lina Hidalgo and Gov. Greg Abbott issued separate stay-at-home orders, caused much uncertainty in the real estate industry when coupled with a crude oil price drop down to the mid-$20s per barrel.

It was a reaction shared by other real estate agents, such as Kenneth Jones from Coldwell Banker United Realtors, who sells homes in the Inner Loop area. “It’s been a little bit of a roller coaster,” he said.

• Despite COVID-19, year-over-year Houston-area home sales up nearly 16% in June

A strong beginning to 2020 was slowed by the coronavirus’s impact on the economy, said Chaille Ralph, the vice president of operations for Better Homes and Gardens Real Estate Gary Greene and the vice chairwoman of the Houston Association of Realtors board.

From January to May, total single-family home sales in the Bellaire-Meyerland-West University area declined nearly 25% compared to the same period in 2019, according to HAR. Most of that decline occurred in April and May, with 140 total fewer homes sold in those months versus last year.

Total home sales for the past 12 months are also trending down, with sales dropping 19% in the market from June 2019 to May 2020 compared to the previous year, according to the MLS data.

However, market trends can vary by neighborhood, depending on the price range of homes, said Luis Torres, a real estate research economist from the Texas A&M University Real Estate Center. 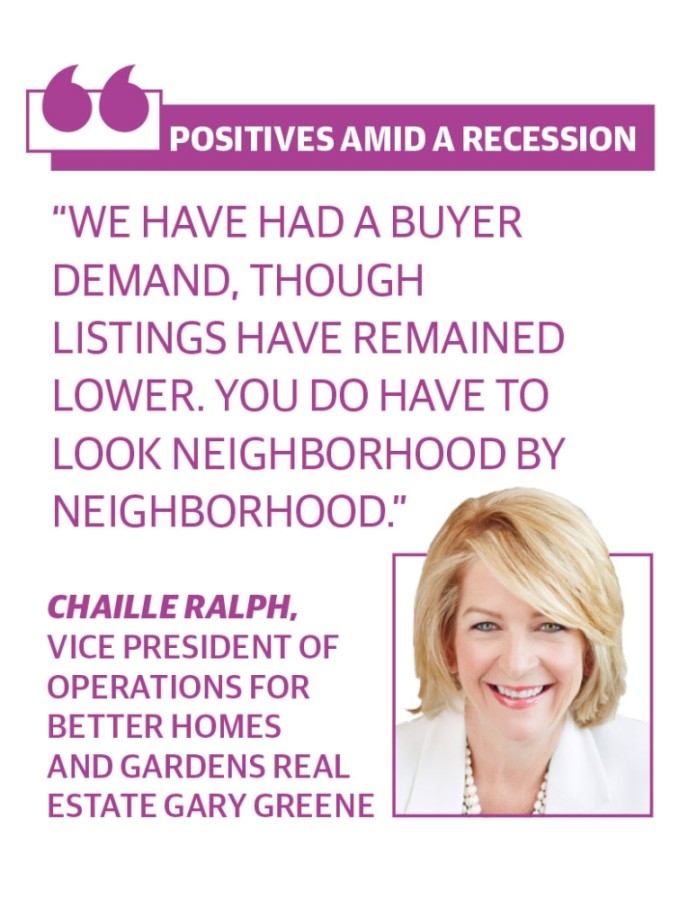 “We have had a buyer demand,” Ralph said. “Listings have remained lower, but you have to look neighborhood by neighborhood. However, overall, inventory has remained low.”

Real estate operations were also affected by the stay-at-home orders.

“We began to sell homes to buyers virtually,” Murray said. “In May, we sold three to four homes where the owner didn’t even see the home until they purchased it. Realtors who don’t do that are not going to stay in the marketplace.”

Still, buyers not seeing the interior of a house in person before purchasing is more of an exception than the rule, and they instead use virtual tools to narrow down their list of options, Jones said.“I’m one of those Realtors that has always implemented virtual tours,” he said. “They are important, but in my experience, there are few people willing to purchase a property through just virtual tours.”

On the lending side of the equation, mortgage refinancing has seen a massive boom, said Eyal Karny, a loan officer with the Houston office for Geneva Financial.

This surge in homeowners seeking to get better deals and lower their monthly payments is leading to a reduction in home inventory in the Houston market in May, according to the HAR, with a 3.5-month supply of homes this year compared to the 4.1-month supply at the same time last year.

The Mortgage Bankers Association has forecast total national mortgage loans to come in around $2.61 trillion in 2020, a 20% increase over 2019’s $2.17 trillion. Of that, refinanced loans are expected to double earlier projections, jumping 36.7% to around $1.23 trillion.

“Market uncertainty around the coronavirus led to a considerable drop in U.S. Treasury rates [in early March], causing the 30-year fixed rate to fall and match its December 2012 survey low of 3.47 percent,” said Joel Kan, MBA’s associate vice president of economic and industry forecasting, in a news release. “Homeowners rushed in, with refinance applications jumping 79%—the largest weekly increase since November 2008.”

What should be noted, however, is despite the low interest rates, which are expected to continue throughout the year, loan guidelines are more stringent than before, Karny said. “With jumbos and other products where you have to get creative with financing, there is a lot less appetite for those than there was before,” Karny said.

Jumbo loans are defined as home loans above the conforming loan limit imposed by Fannie Mae and Freddie Mac, which in Texas is $424,100.

“They are not federally backed,” Karny said. “Those products were much more heavily impacted. Jumbo financing was suspended in some cases now because of too high a risk. Jumbo loans in particular have become much more strict, so that affluent base has been affected.” 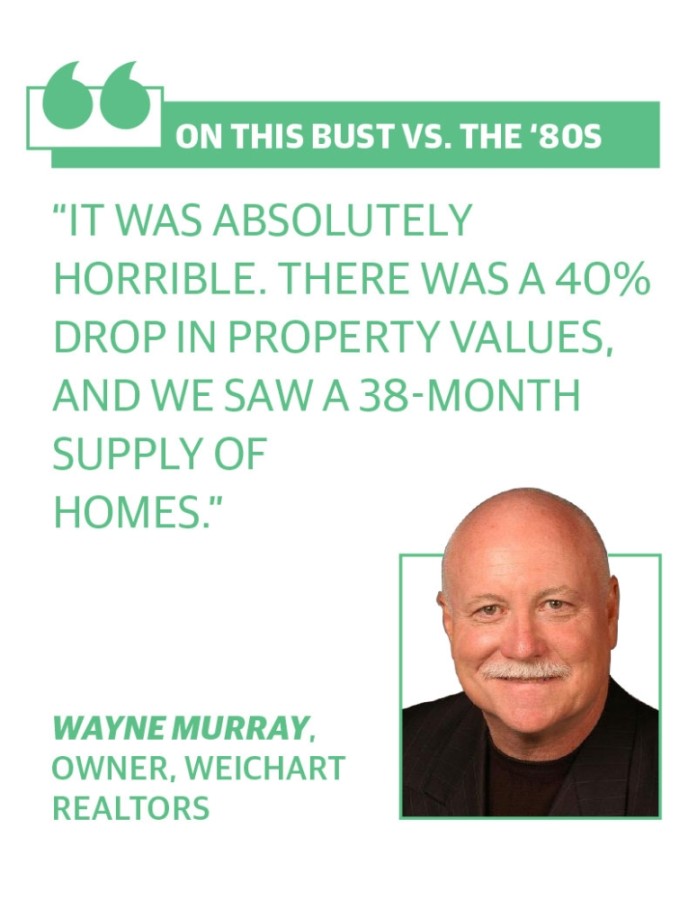 However, according to an April 27 analysis by Alexander Hermann from the Joint Center for Housing Studies of Harvard University, this recession is different from all but one previous recession because of its suddenness.

“With respect to these housing market indicators, the current downturn most closely resembles the recession in 2001, when declines in housing market activity weren’t nearly so severe,” Hermann wrote in his analysis.

Unemployment, however, remains at historic numbers in Texas, with a reported 12.8% rate in April, according to the Texas Workforce Commission, compared to the 14.7% national average. That’s higher than the previous record of 9.2%, which Texas saw during the 1980s oil bust, according to the U.S. Bureau of Labor Statistics.

According to Murray, that bust completely shattered the real estate market. “It was absolutely horrible,” he said. “There was a 40% drop in property values, and we saw a 38-month supply of homes. If no new homes came on the market, it would take 38 months to sell the properties. The average sale price also dropped to $68,000. What we have now is not even remotely close to that.”

Oil prices as of June 29 have shown some recovery since early April, up to about $40 per barrel. 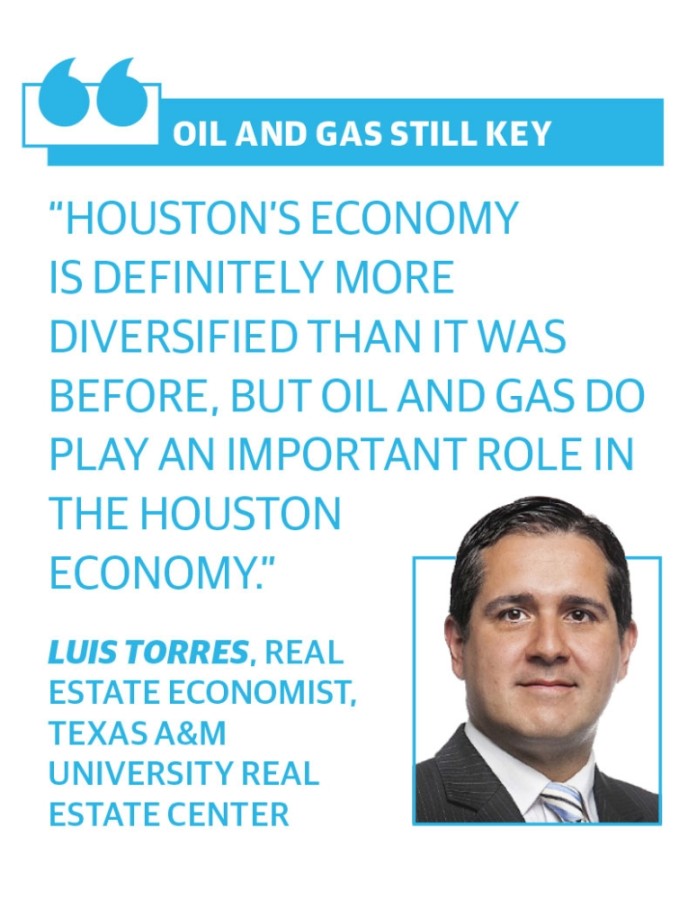 However, even with that recovery, it is still a negative for Houston’s economy despite building its sectors outside of oil and gas, Torres said.

“[It] is definitely more diversified than it was before, but oil and gas do play an important role in the Houston economy,” Torres said.

April unemployment figures released by the Texas Workforce Commission showed 26,300 jobs were cut from the oil and gas industry. In March, 218,900 people were employed in oil and gas; in April it dropped to 192,600.

The future remains uncertain, however, with the unpredictability of the coronavirus, and how the end of government programs such as the Paycheck Protection Program in December will play on the economy, Torres said.

“All of these uncertainties play a role going forward,” he said.