This comes as the city of Bellaire reported over $127 million in total debt as of Sept. 30—almost double the level from 10 years prior—a significant portion of which was brought on by the $54 million Bonds for Better Bellaire, approved by voters in 2016. (Community Impact Newspaper file photo)

The city of Bellaire is one of many in Texas that has taken on more debt in recent years to deliver infrastructure improvements, but at least one city leader would like to see its borrowing curtailed.

“My attitude is very simple,” Council Member Nathan Wesely said. “Look, we’ve done all these big projects. Why don’t we just take a step back and pay down our debt?”

This comes as the city of Bellaire reported over $127 million in total debt as of Sept. 30—almost double the level from 10 years prior—a significant portion of which was brought on by the $54 million Bonds for Better Bellaire, approved by voters in 2016. 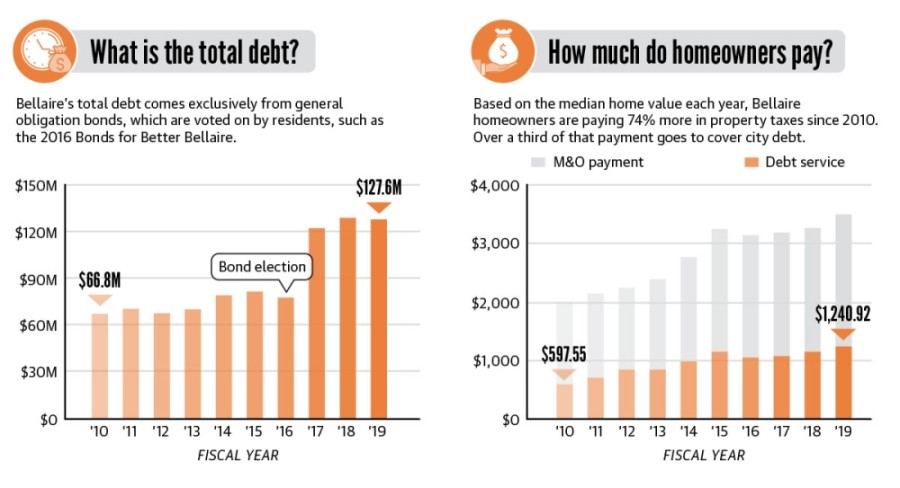 When Wesely came on as council member in January 2020, he wanted the city to come up with a debt plan and proposed two key measures to make it happen: freezing Capital Improvement Program projects for 10 years and reducing annual spending by $3 million. Doing so would pay off the debt early, he said, and would allow the city to then spend $12 million a year for 10 years to replace the same number of streets without incurring debt.

The city’s reliance on property taxes to pay off its debt service every year could come back to bite it, he said.

“You can’t just assume that just because we’re in Bellaire, property values are going to continue to keep going up,” Wesely said.

With those values, Bellaire brings in about $20 million in tax revenue, with between $9 million-$10 million spent on debt service.

“As a household, if you said, ‘Hey, I bring in X number of dollars a year. I’m going to spend half of that on your mortgage payment.’ I think most people would say, ‘Well, that seems a bit excessive,’” Wesely said.

Wesely’s approach would push against a statewide trend. According to the Texas Bond Review Board, a state agency overseeing public borrowing, cities, counties and other local jurisdictions increased their debt by $37 billion to almost $240 billion from 2014 to 2019. Two-thirds of that debt were secured with property taxes, according to the review board.

“To date, all the City’s debt has been general obligation debt, which means it requires voter approval and thus represents the will of the voters,” the city officials wrote in an email to Community Impact Newspaper. 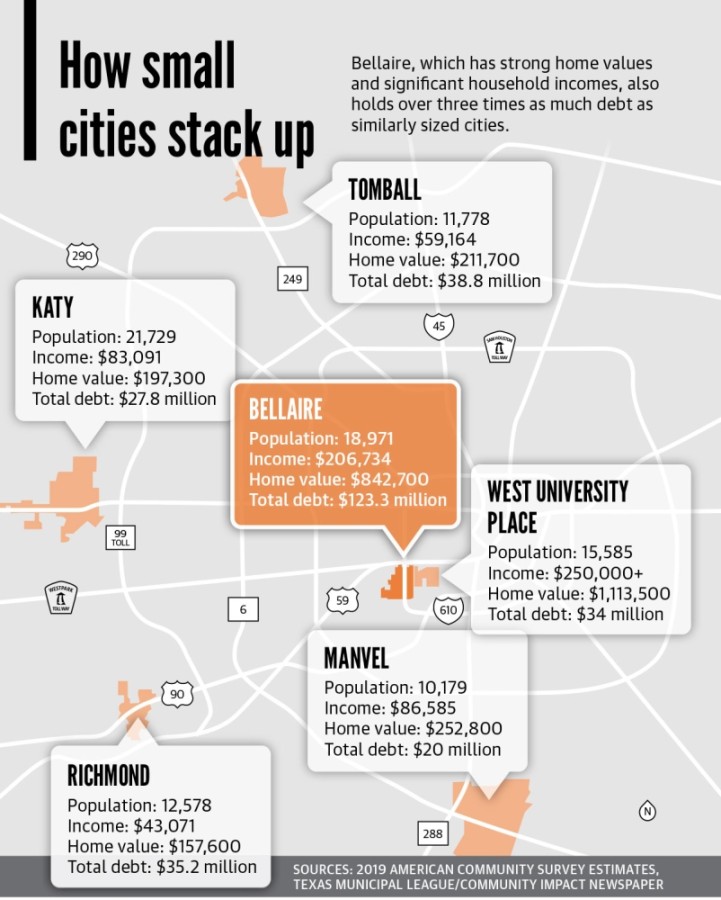 For Council Member Jim Hotze, higher debt means less money in the general fund for things such as maintenance.

“You have a significant portion of annual property taxes going to debt service,” Hotze said. “I would be extremely resistant to taking on any additional debt.”

Debt may be a necessity, however, according to experts.

When used for items such as the new facilities and infrastructure approved in Bellaire’s 2016 bond, taking on debt remains prudent, said James Thurmond, the director of the Master of Public Administration program at the University of Houston.

“Normally cities take on debt for big-ticket items and not short-term debt— but it can be, and there isn’t anything wrong with that,” Thurmond said. “It usually depends on what the city wants to do, but it’s usually big-ticket items that the city can’t afford to pay in one year.”

However, that debt does trickle down to residents in the form of the debt tax rate, which when added to the city’s maintenance and operations tax rate forms the total taxes residents pay annually. In 2019, that debt tax rate hit $0.1532 per $100 of assessed value, which means that with a median home value of $810,000, half of Bellaire homeowners can expect to pay at least $1,241 toward the city’s debt service, a 107% increase since 2010, when payments were less than $600.

The city said that by borrowing, infrastructure costs are spread out over both current and future residents, whereas having current residents pay in full and up front allows future residents to effectively enjoy improvements for free.

Bellaire expects it will pay off all its debt in 2044, assuming no other bonds are issued, and city officials are wary of drawing down fund reserves as an option to accelerate payments.“The City of Bellaire currently enjoys a AAA bond rating, partly because we have healthy fund reserves,” the city wrote in an email. “Utilizing those reserves to make prepayments on our debt could negatively affect our bond rating.”A lower rating could mean increased interest costs, Thurmond said.

Bellaire City Council will play a leading role if the city pursues a debt reduction plan, with discussions kicking off at the council’s prebudget spring retreat, scheduled for May.

For one, highlighting to the rest of the City Council the portion of city revenue used to pay off annual debt might spark a plan that would reduce those payments, Hotze said.

“This is something like Nathan says: We need to shine a light on and see how people feel about a large percentage of property taxes going to interest payments and how we could change that to a lower percentage,” Hotze said.

Wesely said he is in conversation with the interim city manager, and there are two studies—one completed and one in progress—that could help shape City Council’s future discussions on debt.

The first, a management study of the Bellaire Police Department approved by council in August, could reveal potential savings in the city’s budget. The second is a user fee study and cost allocation plan, which focuses on not only ensuring fees are at the proper levels, but also ensuring the annual transfer from the city’s enterprise fund to the general fund is set appropriately.

“I’ve heard some cities brag, ‘We don’t have any debt.’ And they think that’s great,” Thurmond said. “But that could mean they’re not addressing their infrastructure needs. ... It’s going to catch up to them at some point in the future, and they’d have to issue more debt than they normally would.”