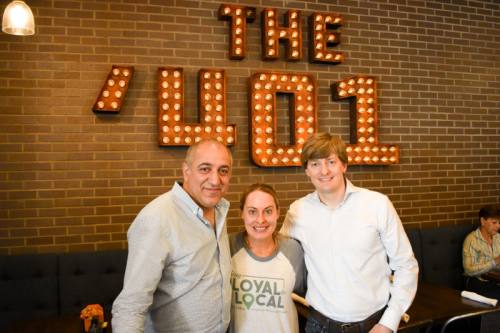 From left: Arash Noamouz, Kristi Coffey and Matthew Coffey are three of the owners of The u2018401.

At the site of what was formerly a funeral home now stands one of Bellaire’s newest restaurants, named after the last three digits of the city’s ZIP code: The ’401.

The modern-American restaurant with an emphasis on family and community was the result of a four-member partnership among Arash Noamouz, a restaurateur; his wife, Kristi Coffey, a former marketer; her brother Matthew Coffey, a certified public accountant; and his wife, Holly Coffey, a teacher.

Noamouz has been in the restaurant business since 1994 when he bought into Hungry’s Cafe, a restaurant his family owned, after suffering a career-ending injury playing soccer for the Los Angeles Galaxy. Through the restaurant he met Kristi, and as the years went by and their family grew, the idea for The ’401 came as they began to wish for a restaurant they and their children could enjoy.

“We would go out to eat a lot with our kids, and it was always a battle because there would be places the kids would want to go to draw on the tables, but then we wanted something we liked with wine and to enjoy a meal,” Kristi said. “We wanted something unique, kind of a home away from home, where everyone in the family could be happy.”

The food and cocktails at The ’401 combine culinary mainstays from around the world in a modern fashion, and almost all the entrees are under $20. The menu also includes vegan, vegetarian and gluten-free options.

“We have Greek food; we have Italian food; we have Mediterranean food and a huge selection of salads. We try to go towards the things that people ask for,” Noamouz said. “We have food for everyone, and we try to keep it that way.”

Since its opening a year ago, the owners said Bellaire has embraced the restaurant and the food and atmosphere they provide.

“The community has really been wonderfully supportive of us,” Kristi said. “One thing that I always see and that people have mentioned to me is that it’s kind of like ‘Cheers,’ because you come in here and end up knowing 5 million people or seeing people you haven’t seen in a long time.”