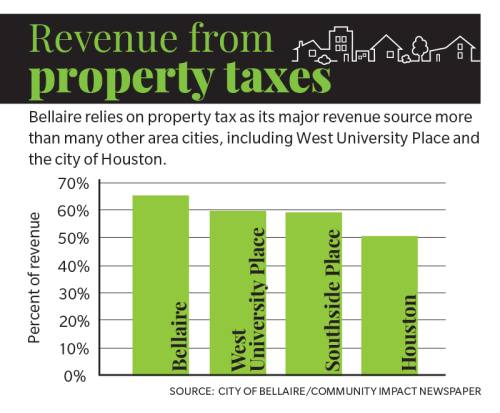 The vast majority of the land within Bellaire’s city limits is zoned residential, and 86% of the city’s property tax revenue—its biggest source of funds—comes from those properties.

With state-imposed limits to property tax increases set to take effect next year as a result of Senate Bill 2, Bellaire staffers have been looking at alternative sources of revenue to balance their budget, one among them being taxes generated from commercial development and activity.

Compared to cities with more diverse sources of revenue and more commercial activity, a city such as Bellaire would be harder hit by limits to its primary revenue source.

Bellaire Chief Financial Officer Terrence Beaman said sales tax has only made up a small portion—about $2.2 million, or 10%—of the city’s general revenue over the years and that the city could benefit from more diversified revenue.

“Several cities are diversified, so that when the economy hits from whatever angle, they’ll be able to absorb it by other options, but our city doesn’t have that,” Beaman said. “As we’re dealing with Senate Bill 2, it’s going to be a huge challenge. It’s a huge challenge for many cities, but they have other options.”

The idea of encouraging business growth in Bellaire is nothing new, as the city’s own comprehensive plan has an entire section dedicated to promoting commercial development while protecting Bellaire’s residential character. The plan scheduled to be revisited next year.

In August, a request to rezone a lot from residential to commercial to build a proposed office building was denied by the City Council in a 6-1 vote, with many council members attributing their decision to a desire to maintain Bellaire’s zoning.

That same desire is shared by some residents, such as Lynne McBee, who said the city’s zoning gives it its “small-town feel” and separates it from cities such as Houston.

“Zoning has a history in this city, and when it is threatened in any way, the citizens are going to rise up, predictably,” McBee said. “Zoning is the underlying protection that secures the value of our investments.”

While the majority of council and many residents still wish to maintain the city’s zoning, doing so by denying new development can have consequences, such as the loss of potential tax revenue that could go toward city services.

For now, Mayor Andrew Friedberg said the potential revenue loss was a price he and others on the council are still comfortable paying, though those consequences of maintaining zoning should be properly recognized by Bellaire residents.

“Any time we decline commercial development in favor of our residential character, let’s at least openly acknowledge that it comes at a cost,” Friedberg said. “As residential taxpayers, we bear a disproportionately greater tax burden when the commercial sector isn’t carrying a greater portion of that cost, and that’s OK, but let’s acknowledge that we’re OK paying it.”

Development opportunities can still be pursued in Bellaire without having to rezone from residential to commercial.

Bellaire resident and professional engineer Danny Sheena is in the process of trying to receive approval for his proposed commercial and multifamily development on the property formerly owned by the Chevron Corp. Sheena said developing the property would be beneficial to the city and its residents.

“Bellaire is a great city, and I think there’s a great opportunity for developers to come in and take it to the next level,” Sheena said. “There are lots of beautiful residential homes, but the city of Bellaire lacks shopping, the restaurants, the play. … I think Bellaire could do a lot of good by providing those kinds of developments to nearby residents.”

The city’s revenue could also grow by encouraging residents to buy more from local businesses—a message supported by the Bellaire Business Association and its “Stay Loyal to Local” campaign.

BBA CEO Denton Ragland said healthy businesses in Bellaire would mean more sales tax revenue for the city to use to provide services to residents, though the benefits of shopping locally are not limited to helping the city’s budget.

“If you keep local businesses healthy and viable, not only are the sales tax dollars staying in your city, but also contributions from those businesses are greater,” Ragland said. “Go to Bellaire Little League and look out on the scoreboard and see how many local businesses contribute to that. … Local businesses give back more to their community than the larger, national chains, and a lot of people don’t realize that.”