Once a reliable revenue source, recycling costs mount in Bellaire and West University 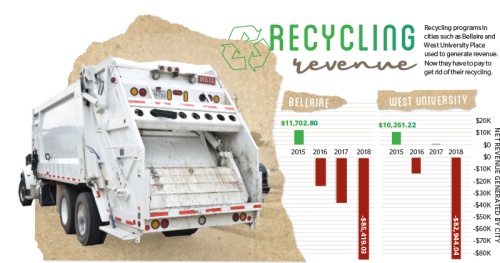 Recycling programs around the country are feeling the negative effects of changes in the way recyclable waste is processed and who buys it.

In the face of declining revenue, some cities have limited their services and others have had to get rid of their recycling programs completely.

While many of the changes in recycling rates across the globe can be attributed to Chinese trade policy, there are still factors down to the individual level that could make or break the future of local recycling programs.

“The future is changing, but don’t give up on recycling,” said Jordan Fengel, executive director of the State of Texas Alliance for Recycling. “There’s a lot of work to do, but it has to be done, and I don’t foresee recycling going away.”

One of the largest difficulties for American recycling programs has been changes in China’s policy for importing recycled materials globally.

According to officials from Waste Management, a company that is one of the largest processors of recycling in the country and the seventh-largest exporter of all goods by volume in the U.S., China used to consume 50% of all paper and plastic recycled in the world, with 13.2 million tons a year being imported from the U.S. alone.

With the passing of China’s National Sword policy, mixed paper and plastic imports are now banned, with the country to potentially halt imports of all international recycled materials by 2020.

For Waste Management, this meant a decrease in exports to China for fiber recyclables from around 27% in 2017 to less than 5% in 2018.

“Because of this, recyclers are continuing to build alternative markets and move materials to other places on the globe,” said Sherrell Cordas, a public affairs senior specialist for Waste Management.

Before completely halting imports of recycling, China has drastically increased its standards in quality for the materials they will accept by only purchasing recyclables with a contamination rate of no more than 0.5%.

“From the simple commodity perspective, as I see it, they’ve been taking a lot of junk. They went from accepting 20% contaminated material, meaning if you had a 100-pound block of plastic, 20% of it could be junk,” Leech said. “Now it’s half of 1%. You basically have to process the recycling before you send it, and it just skyrockets the price.”

The increase in quality requirements coupled with the heavily reduced demand for recyclables in the global market means that the cost for processing recycled goods goes up, while the market value for the processed materials goes down.

At the local level, these changes make it more difficult for cities to recoup the costs of their curbside or single-stream recycling services.

“In today’s estimate, we’re looking at about $100,000 to pay to get rid of it,” said Dave Beach, West University Place’s city manager. “We are now paying to take our recycling to a wholesaler and paying them to take it.”

Even though the average person can do little to influence China’s policy changes, the factor they can most directly influence is a city’s contamination rate, or the measure of how much nonrecyclable material becomes mixed into recycling.

According to Waste Management’s estimates, the average contamination rate measured in their materials recovery facilities is about 25%, meaning one-fourth of the recycling it receives ends up in a landfill because it is either nonrecyclable or the material is in no condition to be recycled.

Cities such as Bellaire and West University Place have contamination rates well below the national average at 16% and 9%, respectively, though Beach said contaminated recycling bins are still common to come across.

“If you’re ever in an area where there are recycling bins, just pop open the lid and look in there. … You’ll have food thrown in with the recycling,” Beach said. “In all honesty, if staff looks in a container and it’s contaminated, it’s not worth the money and the time to try and sort it and clean it. If you look at a container and it’s kind of full of contaminated recycling, it’s going to go in the trash, plain and simple.”

Contamination leads to higher costs to sort, clean and process material to sell to buyers. In other words, the messier a person is when it comes to recycling, the more damage they do to their own government’s ability to collect their recycling and keep their local recycling programs alive.

“The quality of materials entering the marketplace plays a huge factor in the continuation of recycling programs. Good-quality materials help keep costs down and allow the materials to become feedstock used by mills,” Cordas said. “Residents should focus on recycling clean and dry bottles, cans, paper and cardboard in order to provide quality feedstock to the market that mills can use instead of virgin resources.”

Besides keeping one’s recycling dry and clean, the best way to reduce contamination is by learning what a city’s recycling program accepts and does not accept in their bins or curbside pickup.

“We try to remind people as much as possible, but sometimes people still get it wrong,” Leech said. “They’re trying to do the right thing, but I think a lot of that messaging is going to change. It used to be, ‘When in doubt, recycle,’ but now it’s ‘When in doubt, throw it out.’”

Although recycling revenue has decreased significantly over the past few years in cities such as Bellaire and West University Place, their recycling programs, at least for the near future, will continue.

“The Houston market hasn’t been as badly affected as other markets throughout the country,” Leech said. “I’ve heard about a couple of communities that have had to cut their recycling programs dead. … We’re not even close to that.”

Fengel said that the future of recycling programs could flourish if businesses in the U.S. were able to start buying the recycled materials that were previously sold to China.

“The crisis is really a beaming opportunity for Texas to become one of the major inlets and outlets of materials in the nation,” Fengel said. “We could really handle a lot of America’s issues with recyclables if we were able to help companies use recycled materials.”

If the downward trend of recycling costs continue, citizens of Bellaire and West University Place could see an increase in their utility billing fees to keep up with the costs, unlike the city of Houston, which funds its recycling and trash collection programs using a portion of property taxes. If the costs become too great to keep recycling programs alive, governments could decide to limit or discontinue services.

“The question really gets down to, ‘What’s the threshold?’ That would be for the community to decide and the elected policy board,” Beach said. “The good news is West U has had a long-term commitment to recycling since ‘72. It’s a priority for the council to look at being green.”