Work on I-69 and the Loop, the state's most congested highways, is intensifying, TxDOT says 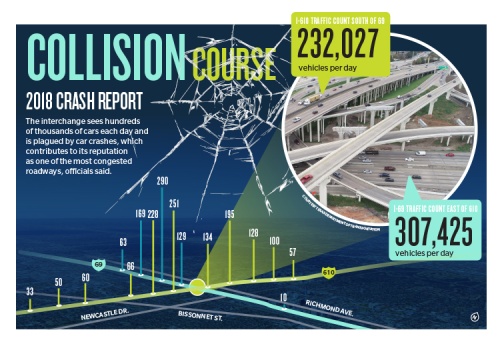 Two I-69 main lane closures in June—slated to remain in place until 2020—are a sign the $259 million project to redesign one of the state’s most congested roadways is entering a period that will test the patience of Houston commuters.

“The work is intensifying,” said Danny Perez, a public information officer for the Texas Department of Transportation in Houston. “These closures, those are not small temporary closures. This is a sample of what’s to come.”

When it is done in 2024, the interchange between I-69 and Loop 610, underway since fall 2017, will not have any new main lanes, but it will have new two-lane connector ramps, new shoulders on Loop 610 and other updates that are hoped to improve safety, officials said.

Fewer crashes could mean less gridlock. The main lanes leading up to the interchange on both highways experienced in excess of 2,300 crashes in 2016 alone—more than six per day on average, according to state data.

“I am lucky I don’t have to commute anymore,” said John Monday, a now-retired Bellaire resident who experienced a crash of his own on the interchange. “Now we’re just waiting for the other shoe to drop and get even more congested.”

On the ground, businesses and homeowners near the construction can do little but wait out the yearslong project, which has coincided with the Uptown bus rapid-transit project, for which TxDOT is overseeing the construction of a dedicated, elevated lane.

“There is so much cruddy construction,” said Kurt Craig, the manager of Luling City Market on Richmond Avenue near Loop 610. The barbecue joint has been around for over 30 years. “It’s hurting sales, absolutely. It’s been going on for a year and a half, and we’re down maybe 15% or a little more. The weekends are horrible.”

TxDOT officials are advising drivers to find alternate routes and plan ahead but to not avoid the area entirely.

“We want you to keep conducting business here, visiting the area,” Perez said. “You’re just not going to be able to hop in the car and go without checking first.”

The complexity of the project is compounded by the sheer number of lanes and traveling cars that pass through each day, making it perhaps one of the agency’s most challenging projects.

“It’s one big jigsaw puzzle,” said TxDOT engineer Paul Eley, who also worked on improvements to the interchange in the early 2000s. “You have major stakeholders, complex utilities in the ground, high traffic in both directions. … It’s about as complicated as it gets.”

With seven phases, not including “Phase Zero,” which included preliminary work, the project is about to enter a set of connector ramp demolitions and reconstruction.

The contractor, Williams Brothers Construction, could receive as much as $10.2 million in incentives if milestones are met ahead of schedule.

Making connector ramps two lanes will reduce the backlog of exiting vehicles that piles up on the main lanes, creating delays and a safety hazard, he said.

“When this interstate was being designed and built originally, the design standards are not what we use today. We have a better idea of how to make these roads safer,” Leong said.

As a congestion-relief strategy, this is a commendable effort, but greater gains could be made by reducing car traffic overall, transportation experts said.

“Don’t underestimate that these expanded connector ramps will take queues off the main lanes and will reduce some congestion,” said Sam Lott, a Texas Southern University researcher with over three decades of experience in road design and mass transit planning. “That said, over the next 10 years, we will have built out just about all the capacity there is to add.”

Lott has conducted modeling that shows most of Houston’s highways, including the Loop and I-69, will be congested all day by 2035 if they are not already. The I-610/I-69 roadways see hundreds of thousands of cars every day. I-69 saw over 304,000 cars per day east of the Loop in 2016, while the Loop itself saw over 274,000 cars north of I-69, according to TxDOT. But it also saw significant numbers of crashes that year with 1,689 on the West Loop and 679 on I-69 on either side of the interchange, according to the state’s Crash Records Information System.

The West Loop earned the No. 1 spot on a ranking of the state’s most congested roadways in 2018. Data compiled by the Texas A&M Transportation Institute shows that time lost to commuting equated to $119.4 million in the average worker’s wages. The second-worst roadway was I-69 inside the Loop.

With a $259 million project not adding new main lane capacity, the Loop and I-69 are in line for some creative solutions to improve traffic conditions.

“We are at a turning point of how we look at the problem of congestion and turning our attention to transit,” Lott said.

The one-way high-occupancy vehicle lane that connects commuters as far away as Sugar Land to downtown Houston is slated to become a two-way option under METRONext, the new transit plan under the Metropolitan Transit Authority of Harris County. A time frame for the conversion, part of its Regional Express network, has not been established. Voters will have to approve the plan in November before projects can move into the design phase, according to METRO.

I-69 is also in the midst of a preliminary TxDOT study that could lead to further discussions of new options for the corridor, a section of which could be included in the I-45 North overhaul that is currently being studied.

A TxDOT plan to build elevated express lanes along Loop 610 was studied in 2014-15, but those plans have not moved forward since, Perez said. No projects were proposed for the Loop in the most recent regional call for funding by the Houston-Galveston Area Council, which funds mobility initiatives.

In the meantime, residents around the Loop and commuters need to adjust, Perez said.

“You can probably start to expect some type of closure every weekend,” he said.
SHARE THIS STORY