Murder by the Book: A hub for crime, mystery stories for nearly 40 years 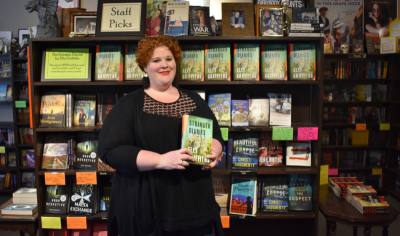 McKenna Jordan is the owner of Murder By The Book.

McKenna Jordan’s exposure to mystery and murder began at a young age.

Both of her parents worked in law enforcement, and as a child, she was surrounded by their stories of crimes and investigations and began to develop a lifelong interest in mystery literature.

“I’ve always liked mysteries, and both of my parents were Houston police officers, so I kind of grew up with crime all around,” Jordan said. “Every day I was overhearing talk, and my dad was a crime scene investigator, so there were photos on the table which I’m sure were not child appropriate at any given time that I grew up with, so I was kind of in that world.”

Today, Jordan is the owner of Murder By The Book, a specialty bookstore founded in Houston in 1980 that sells fiction and nonfiction literature associated with the murder, espionage, mystery and fantasy genres.

She began working there part-time in 2003 while completing her master’s degree in violin performance at the University of Houston. Over time, Jordan went from being a part-time employee working a few hours a week to a full-time manager and book buyer for the store until the store’s founder, Martha Farrington, told Jordan she was ready to retire after 30 years of owning the store.

After Jordan’s father died, she used the inheritance to buy the store from Farrington and became Murder By The Book’s new owner on Jan. 1, 2009. Brenda Jordan, a former police officer and Jordan’s mother, works at the store part-time.

Jordan said the store’s longevity and success are due in large part to its loyal customer base of over 200 returning readers who visit the store monthly as well as the appeal of the mystery genre.

“If you look at The New York Times Best Seller list, at least half of it every week is crime fiction,” Jordan said. “There’s a huge, huge readership, and I think there’s something so comforting about meeting someone, introducing people, there being an issue, a villain, and at the end of the book, in so many of them, justice is served and everything is tied up with a bow.”


Murder By The Book