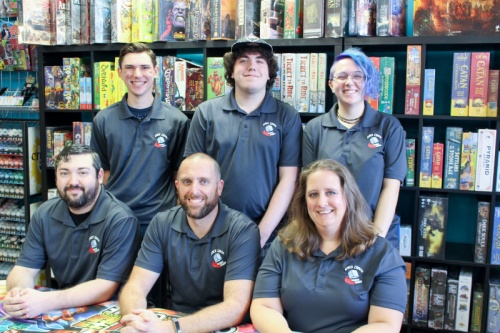 Brian and Laura McMeans opened Space Cadets Gaming Gaming inside Oak Ridge North’s Space Cadets Collection Collection in late 2016 with the hopes of giving the local community a place to have fun in a family-friendly environment.

Brian said after six years of working alongside Jen King, owner of Space Cadets Collection Collection, he wanted to open his own space to hosts gaming events and role-playing groups.

“I had been working for Jen on the [Space Cadets Collection Collection] side doing game events and tournaments since 2012 and had kind of grown that area and started hosting more and more events,” Brian said. “Jen knew that my long-term goal was to have a store of my own, and she said perhaps it was time to venture out and do that.”

Since debuting in November 2016, Brian said the gaming side of the store has taken off and become popular in both the Oak Ridge North and The Woodlands communities.

“We’ve been experiencing very good and steady growth since opening,” he said. “We offer board games, card games, miniatures and host role-playing games, such as ‘Star Wars’ and Dungeons and Dragons. We have a D&D group almost every day of the week now.”

Brian said the store has a casual atmosphere, and he and Laura hope to draw a younger generation into being more involved with games that are not digital or online.

“A lot of preteens and teens have their focus on the online world and video games, and we work really diligently to try and get them into something else,” Brian said. “Fifty percent of our D&D groups are comprised of teens and kids. Our daughter, who is 14, is a [dungeon master] in [Dungeons and Dragons,] so it’s a lot of that younger crowd.”

Laura said it also helps that Space Cadets Gaming Gaming is a place where children and teenagers can feel safe while they have fun.

“It helps with parents that once they spend a little time with us they can drop their kids off,” Laura said. “It’s a safe environment.”

Brian said that due to the family- friendly environment and the wide variety of board games available, Friday nights and Saturdays at the business are usually packed with players. Board games, such as Ticket to Ride, Catan and Gloomhaven, are popular choices among customers. Groups who play Magic: The Gathering, a tactical card game, or Heroclix, a collectible miniature game based on superhero comic books, can also be found throughout the week.

Brian said customers can also try out games with friends or family members before deciding to purchase one.

“We offer our demo cabinets, which is where we have our demo games so [customers] can try it out, and we try to keep at least one copy of the game on sale,” Brian said. “They can come in and try it out and see if they like it, and then they can purchase it off the shelf.”

Brian and Laura said while they only have one location for Space Cadets Gaming Gaming right now, they still have future plans to one day expand the store and host more events, groups and tournaments.
“We want people coming in and playing games,” Brian said. “Our tagline is “building community through gaming.” Selling things is great, but when I look around on a Saturday and see a large group of kids playing a card game and a family playing a board game, and everyone is laughing and having a good time, that’s what really brings the fulfillment for me.”