Katy area turning itself into ‘destination’ for families, tourists 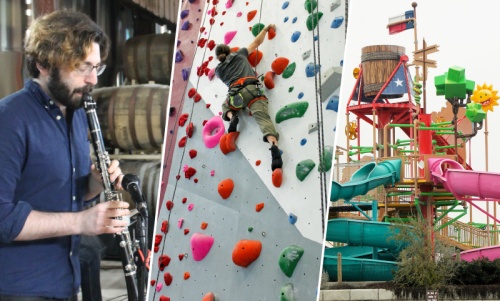 More recreation and entertainment spots opened around Katy in the last few years.

As the Katy area grows, so does residential desire for convenient entertainment options. Several recreation venues opened over the last decade—with more underway as subdivisions develop farther south and west—to satisfy tourists and locals interested in activities outside Houston.

Live music and family-friendly gatherings at places, such as Central Green Park and a planned plaza in downtown Katy are also intended to keep residents’ dollars closer to home and attract visitors from elsewhere.

From 2011 to 2016, arts, recreation and entertainment gross sales in the area grew by about 47 percent in Harris and Fort Bend counties and more than quadrupled in Waller County, according to the Texas Comptroller of Public Accounts.

During that time, the counties also gained more than 532,000 people combined—20.7 percent of whom were children and teenagers—and mean household incomes rose by about 10 percent, according to the U.S. Census Bureau.

“Because the city of Katy’s population is only at 16,000 … we get a lot of ‘tourists’ just from the greater Katy area,” said Kayce Reina, Katy’s first director of tourism, marketing and public relations.

Leading the industry growth was the city of Katy, which has received more annual revenue from sales taxes than from property taxes for the last decade. City Administrator Byron Hebert said this is due in part to commercial and industrial development but Katy Mills, Typhoon Texas and the future Katy Boardwalk District are also within Katy’s 14.6 square miles.

Lately, the city has capitalized on its recreation potential. Reina was hired in 2014, and www.travelkaty.com has been in development for a year and a half.

“All that we’ve been doing is kind of trying to make Katy more of a destination-type location,” Hebert said.

From 2004 to 2017, nine hotels opened in the city, while a hotel and conference center is also planned for the Katy Boardwalk.

That mixed-use leisure and residential complex designed by the city and private developers has so far received $7.5 million from the Katy Development Authority for a lake, landscaping and some road infrastructure. The KDA helps the city boost economic development through public-private partnerships.

The Boardwalk’s lake is expected to open this year, but the whole project will take until at least 2020, with apartments, retail, dining and trails.

The city of Katy also agreed to reimburse Katy Mills up to $9 million if the facility makes certain upgrades as part of a redevelopment agreement engineered by KDA. The money is cumulative, and if the mall spends $8 million on “eligible projects” by October, Katy contributes $2.4 million, Reina said. Eligible projects include exterior painting, new entrance signs, and interior cosmetic upgrades, among others.

Katy is also planning a downtown entertainment plaza across from City Hall where the old water tower stands between Second and Third streets and avenues C and B. Possible design elements include an amphitheater, benches and green space.

“We really feel it’s going to be an environment that will bring in new events and festivals,” Reina said.

The lodging and leisure hub around I-10 is one of the reasons Typhoon Texas opened near the mall in 2016. Dalton, whose company KDW is also part of the Boardwalk, called the site of his 25-acre waterpark “a bull’s-eye for families with children” from Sugar Land and Cy-Fair as well as from Katy.

Typhoon Texas has another 18 acres on its south side that Dalton said could be used to expand the waterpark. He said more attractions would open as population and development grow, particularly corporate leisure spots for the Energy Corridor.

Considering the city’s small size by comparison, most growth is happening in unincorporated Katy. Area Realtor Osneyda Canales, who is with Keller Williams, said her clients typically ask about the area’s weekend offerings.

“I always try to take them to LaCenterra first because it’s always packed, and there’s always people there no matter what time of day.”

Inside the retail and dining complex is Central Green Park, maintained by the Willow Fork Drainage District. The park opened in July 2012 and since then, annual attendance has increased by nearly 28.8 percent, according to General Manager  Yvonne Arceneaux.

Movie nights, tai chi classes and live music are mainstays at Central Green, which measures about a half-acre. The park’s reputation is growing and even attracts international events.

“Every night on Central Green I hear about eight different languages. And I just love it,” Arceneaux said.

No Label Brewery and The Wildcatter Saloon also have live music on weekends. At No Label, Jennifer Royo, co-owner and sales and marketing manager, said Saturday afternoon shows were meant to attract more day drinkers and families.

“I think, you know, especially for people that just live on the west side [of Houston] in general, they’re just looking for something to do on the weekends,” she said.

The Wildcatter’s co-owner Carmen Pool planned a Brazilian festival, cook-offs and a pet adoption fair this year. For now, the venue does not charge for private room reservations as a way to help build customers.

Katy country musician Cooper Wade has played the Wildcatter, Mo’s Place and other venues around Katy but said Central Green is perhaps his most frequented stage, which the father of four said was due to its all-ages appeal.

“It’s great to play in a family atmosphere,” Wade said. “It’s going to be more crucial that people provide places like this.”