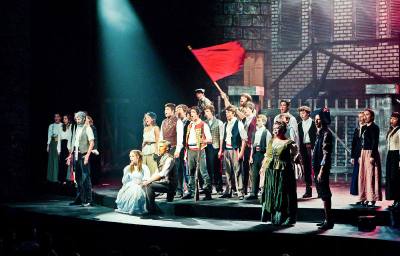 Keith Brumfield founded Class Act Productions 21 years ago in The Woodlands when he realized children in the area did not have a source for local theater.

“I was a teacher at Knox Junior High [School], and I had just retired from teaching,” Brumfield said.  “I had been involved with community theater, and I had directed shows at the Crighton Theatre. I realized students went elsewhere to do theater and I said, ‘We need to have a theater here.’”

Since 1996, Class Act Productions has put on a variety of shows, including “The Wizard of Oz” and “Les Miserables.” Brumfield said while the theater company mostly focuses on youth actors, adults are often cast in productions as well. Children age 8 and older are encouraged to audition for shows throughout the year.

For students who are cast in shows, there is a fee to participate that is used to help cover costs for professional lighting, sound effects and an orchestra, Brumfield said.

“When I first set [the company] up, I wanted the students to be as close to a professional production as possible,” he said. “Even if they don’t pursue acting as a career, at least they will remember the experience they had here.”

In addition to putting on four shows a year, Brumfield said classes for school-age students are available at the theater’s location near I-45. Students can enroll in acting, voice and dance classes as part of Class Act Production’s school of musical theatre. The acting and voice classes are 12-week sessions while dance classes are held all year long.

While classes are held at the Budde Road location, shows presented by Class Act Productions are put on at the Nancy Bock Center for Performing Arts on South Panther Creek Drive.

“We don’t own our own theater, but we’re very fortunate to have our own space to practice,” Brumfield said. “We look forward to the day when The Woodlands has a theater.”

For the holiday season, Class Act Productions is set to perform “A Christmas Carol, The Musical,” which runs Dec. 15, 16 and 17. Shows  scheduled for 2018 so far include “Beauty and the Beast” and “The Hunchback of Notre Dame.”

Brumfield said he believes Class Act Productions remains a unique performance outlet for children in the community, which can be seen in the shows they produce.

“There are some great groups here, and we’re glad to be a part of The Woodlands,” he said. “I feel like our company raises the bar as far as the quality of the production. Our costumes, sets and budget of our shows display how much we raise the bar for the overall level of production.”