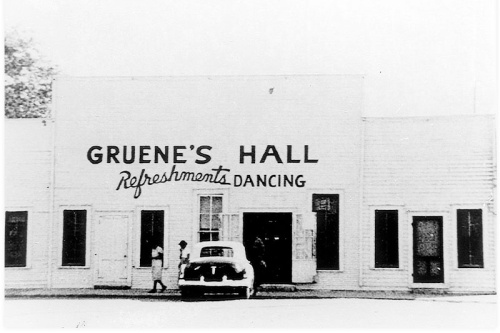 Gruene Hall was formerly known as Grueneu2019s Hall. It has continually operated since its opening in the 1840s.

Each year, tourists and locals flock to a small piece of Texas to experience the scene in Gruene. Located off of FM306 and Hunter Road in New Braunfels, the largely preserved Gruene Historic District shines a light on what once was.

“It has its own special character that nobody else can compare [it to],” said Kristen King, social media coordinator for the Molak Corp., which owns and manages a significant portion of Gruene. “You kind of step back in time once you step over [into] that historic district, it feels like. It’s never changed.”

According to Crystal Kinman, marketing manager for the Molak Corp., Ernst Gruene immigrated to what is now known as Gruene in 1845. He and his wife planted 9,000 acres of cotton and started a family. A sharecropping opportunity drew 20-30 families who helped work the land.

The early days consisted of a mercantile, bank and post office. A dance hall—now operating as Gruene Hall—was built to serve as a social center.

“So it was pretty much a little town, you know?” Kinman said.

The 1920s threatened to end Gruene’s heyday for good. In 1922, the cotton gin burned down.

“All that’s remaining is the brick boiler room, which is the three-story part of the Gristmill [restaurant] now,” Kinman said.

Seven years later, in 1929, Gruene was not immune to the stock market crash. To make matters more dire, an infestation of boll weevils destroyed the cotton crop.

“Everything just kind of went downhill from there,” Kinman said. “… It was a ghost town except for [Gruene Hall] until the 1970s,” which has been the only establishment to survive Gruene’s ups and downs.

“No matter what you’re doing, you always need a drink,” Kinman said.

In the 1970s, a kayaking trip by a University of Texas architecture student sparked a vision that helped bring Gruene back to life.

“[Chuck Kaufman] was kayaking down the Guadalupe River and thought he would just come up and check it out,” Kinman said. “He just found all these buildings up here and fell in love with them. He was kind of the one who started getting this area on the national register.”

While there were talks of tearing the historic structures down to build condos, Kaufman began cataloging the buildings, taking photos and making steps to historically protect them.

The effort to preserve Gruene continued in 1975 when stockbroker Pat Molak was looking to change his career path. He saw an ad in Texas Monthly advertising businesses for sale in the area. Specifically, Molak had been in the market for a bar, saloon and dance hall.

“He came and checked out the buildings, and they actually walked in the front door here [in Gruene Hall], and there were some people up there drinking some beer, and he had to use the restroom. He saw [the back of the building] and had to have it,” Kinman said.

Largely attributable to Kaufman and Molak’s efforts, the Gruene Historic District was officially adopted into the National Register of Historic Places in 1975.

According to Brown, a district must be at least 50 years old to qualify for the national designation. It must also undergo an evaluation to determine the significance of a district in a given period.

“[Historic districts] like Gruene are important because they preserve the historical fabric of different communities that played an important part in what Texas is and how Texas became the state that it is today,” Brown said. “National districts are particularly interesting because they tell a more cohesive story.”

Although Kaufman had a passion for Gruene, Kinman said he fell on hard times at one point and almost sold Gruene’s most iconic feature—the water tower. He owned the building where the Gristmill restaurant operates today as well as the tower.

“He had a crane [attached to the water tower] and was going to sell it,” Kinman said, adding that he was stopped in the act. “If you look, there is still a dent where the crane was attached.”

King remembers an empty pasture where the Gruene River Village shopping center sits today. Although not part of the Gruene Historic District, new businesses along Gruene Road are beginning to move toward it.

“There’s just so much growth in this area. There is nothing we can do to stop it, and I don’t know if we would want to if we could,” Kinman said. “I don’t think it’s affected us too much. We’re just kind of our own little town. We’re happy for it. We’re glad they’re coming.”

King said she has heard Gruene’s unofficial motto is “Gently resisting change since 1872.” However, even with the historic structures still intact, Gruene continues to evolve.

“We’re always just trying to enhance this and make things better with our businesses and events and offer different kinds of food,” King said, adding that the strawberry cake at Mozie’s is “the best dessert in the world.”

New Braunfels resident Coy Miller said he is also a frequenter of Mozie’s. He has lived in New Braunfels for 10 years and said he visits Gruene a few times a month.

“The best part would probably be Gruene Hall, the venue,” He said. “There are so many random people coming around playing, and there’s a couple good spots to eat over there, too.”

Although many of the live music events in Gruene are free to the public, Miller said he has gladly purchased tickets to see acts such as Ryan Bingham, Charley Crockett and Tyler Childers.

“I could go back for years,” he said.

While some of the businesses in Gruene are decades strong, such as Mozie’s and Gruene River Outfitters, others continue to make a home in Gruene. Gruene Hat Co., which opened in the Mercantile Building at 1601 Hunter Road in March, is the most recent establishment to emerge. The business sells name-brand cowboy hats.

“We think it’s a perfect fit and kind of want to be a nice component or missing link there, if you will, to Texas heritage,” owner Cody Courtney said.

“Our whole goal is to enhance the Gruene, Texas, experience.”

Courtney said he felt validated with his business venture when the first customer was a tourist from Germany who wanted to immerse himself in the Texas culture.

“Life’s better with a hat on,” Courtney said.


The present and future

Many free happenings, such as the Holidays in Gruene series and a monthly Market Days event, create a sense of community, King said.

“It’s still a place for people to gather—for people to bring their friends and family and really enjoy being together,” King said.

Although it has been revived from the stagnant place it was 40 years ago, King said those who visit Gruene today are able to slow down and remember a time of less hustle and bustle. Screened windows welcome a breeze into Gruene Hall where ceiling fans take the place of air conditioners, and only cash is accepted at the bar.

“People over 100 years ago would gather to eat, drink and dance the night away, and people still are, in the very same buildings, even today,” King said.

While Gruene is largely touted as a tourist’s community, Miller views it as a place for locals to enjoy year-round. He said he takes friends and family to enjoy Gruene when the opportunity presents.

“I patronize that area when it’s not so much tourist season,” Miller said. “When tourists are in town, it just gets so crowded that I don’t go quite as much, but it’s a cool spot to be seen by all.”
SHARE THIS STORY