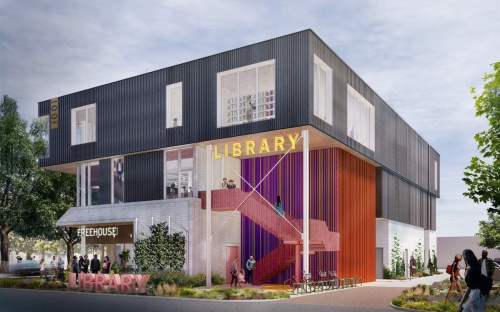 A new development off of Westheimer road may be the site of the Freed-Montrose Library if the city moves forwards with plans to relocate it.

The Freed-Montrose Neighborhood Library could find a new home within an upcoming development near the 800 block of Westheimer Road.

The development, known as Montrose Collective, will consist of two mixed-use buildings with space for offices and retail as well a potential new location of the Freed-Montrose Library, Steve Radom, founder of real estate development firm Radom Capital, told residents at a public meeting Sept. 26.

While a deal between the city and the developer has not been finalized and will need City Council approval, the motivation for finding a new space for the library comes from the growing maintenance costs associated with the Freed-Montrose Library's current building which dates back to 1946.

The University of St. Thomas, which owns much of the property surrounding the library, has indicated an interest in buying it from the city, said James Koski, deputy chief of staff for Mayor Sylvester Turner.

"The estimate for required repairs and maintenance is at least $7 million," Koski said. "Work on the foundation, roof, electrical, plumbing, elevator and HVAC is required to bring it up to standard, and that doesn't include any modernization or upgrades."

Houston's current Capital Improvement Plan has $4.6 million set aside to relocate the Freed-Montrose Library to Midtown, however that location is undetermined and the move could require the city to construct a new building, Koski said. Doing so would likely cost double the amount the city has set aside.

The city of Houston owns a portion of the 800 block of Westheimer Road, where the Houston Police Department operates a store front, where officers collect incident reports. Instead of selling the the HPD property to Radom, the city is in the process of brokering a deal to require the developer to include the library in the project, Koski said.

The response team stationed at the Montrose storefront will relocate to the central police station but remain assigned to Montrose for patrol and other duties, Houston Police Chief Art Acevedo said. He said he wants the department to move away from the store model, which he said creates inefficiencies. Radom said the development will have security cameras and be patrolled 24/7 by security guards.

"I believe this will be able to allow us to deliver services more efficiently and effectively and with more intelligence-led data," Acevedo said.

Montrose resident Steve Longmire said the HPD storefront was advocated for in an attempt to improve the safety of the neighborhood's prevalent LGBTQ community. He said he is worried that a decreased physical police presence will leave more members of the community vulnerable to crime.

"Chief Acevedo, we mourn the loss of our long-fought for community store font," Longmire said. "We're going to have to work really hard to keep that dialogue going."

The plans for Montrose Collective, which had been shared minimally with the public prior to Sept. 26, include two buildings on Grant Street and on Westheimer Road where Greek restaurant Theo's and the HPD storefront are located.

The building on Grant, which is currently a shared parking lot behind Burger Joint, will house first-floor retail and and dining as well as a 12,000 square-foot second-floor space for the potential library.

"We're just so happy we have a way to keep the library in Montrose," Mayor Pro Tem and District C City Council Member Ellen Cohen said.

The other building, on the Theo's and HPD storefront property, will also house retail and new office space for Radom Capital.

To promote walkability, the sidewalks in front of the building will be 20 feet wide and all parking will be relocated behind the building to maintain sidewalk continuity, Radom said. The property will also have the capacity to park 100 more bikes than city code requires.

In addition to extensive landscaping and a half-acre public green space, all of the live oaks on the property will be preserved, Radom said.

Several Montrose residents spoke favorably of the project's design and its planned inclusion of the Freed-Montrose library.

"This is exactly the kind of development, design and aesthetic we deserve over here," resident Alex Taghi said. "Far too often, we get a strip mall that's put in without much thought behind it."

In addition to Montrose Collective's two mixed-use buildings, Radom plans to construct a five-story, 580-space parking garage, which includes one basement level, Radom said. About 100 spaces will be open to the public, although that number is not finalized, and 25 will be free spaces for library patrons. The remaining spaces will be reserved for Montrose Collective visitors, Radom said.

The parking structure will be constructed and funded by Radom Capital, however a portion of the Montrose tax-increment reinvestment zone revenue could be contributed to pay back a portion of the cost of the structure over time, said Sherry Weesner, Montrose TIRZ Public Engagement Chair.

It will be located behind the Montrose Collective's Westheimer Road building.