Brackenridge campus property scheduled for redevelopment by end of 2019 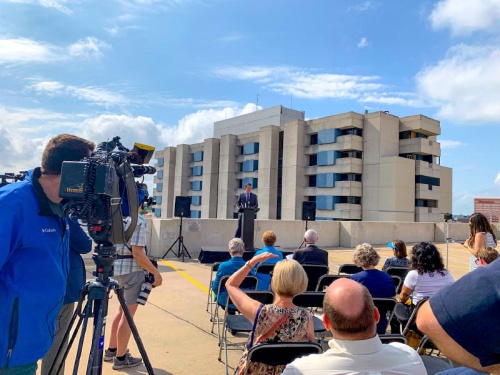 Central Health and city officials spoke about the Brackenridge hospital at a May 15 press conference.

Central Health owns 14.3 acres of property, divided into six blocks, surrounding the nine-story hospital tower at Red River and 15th streets. In addition to the Brackenridge building, it plans to demolish all unused structures to provide developers with “a clean slate,” substantially increasing the land value, per the district.

Steven Lamp, Central Health vice president of real estate and facilities, said the property is on track for redevelopment by the end of the year, at a May 20 community meeting.

To facilitate this project, Central Health is in the process of negotiating an interlocal agreement with the city of Austin that would have the health care district foot the bill for the relocation of Red River from 13th Street to 15th.

Its board of managers voted May 29 to authorize President and CEO Mike Geeslin to negotiate and execute the terms of the interlocal agreement, which Geeslin said would be a boon to the project because it will expedite the city’s permitting and zoning processes.

The property is zoned for public use, but Central Health would like it rezoned as the Central Business District, allowing for higher-density development.

“Getting site plan approval for this development is very important for the process,” Geeslin said May 29.

The Brackenridge campus was home to a public hospital that served patients regardless of their ability to pay for 133 years. It closed in 2017, when Ascension Seton moved its hospital operations from the Brackenridge building to the new Dell Seton Medical Center at The University of Texas.

In 2004, the city of Austin transferred ownership of the Brackenridge campus to Central Health.

Four years ago, Central Health launched a community engagement process that led to a master plan for the property’s redevelopment.

The district’s initial plan was to turn the campus into a high-density development that would include commercial and residential uses with a focus on health care services and research.

The redevelopment was intended to recoup about $34 million in annual lease payments that Ascension Seton paid to operate the former hospital.

The plan shifted, however, following leadership changes at Central Health, including Geeslin’s appointment as CEO in 2017.

Since then, Central Health has leased two of the property’s tracts as a cost-saving measure while maintaining its ability to redevelop the others.

“It would have been at least 15 years until Central Health realized any net revenue if we’d stick with a master developer strategy,” Geeslin said in a May 15 news release.

While Central Health and the city of Austin have not yet finalized an interlocal agreement, documents show preliminary terms, including “development support” from the city, such that the city will agree to the overall site plan application for the Brackenridge redevelopment and accelerate timeline reviews for permit applications.

According to Central Health documents, the proposed deal includes a land exchange that would grant Central Health ownership of Red River from 14th Street to 15th Street.

Construction is expected to begin in August on a separate project to shift Red River east between 12th and 15th streets and west between Martin Luther King Jr. Boulevard and 32nd Street to make room for a new UT special events arena, per city documents.

The relocation of Red River is an essential component of maximizing the redevelopment, per Central Health officials. Preliminary plans show the new street will run adjacent to four lots throughout the property and will include transit options.

In exchange, Central Health will provide the city with an easement for the relocated stretch of Red River.