Electric aircraft and autonomous vehicles: 3 transportation solutions that could be coming to Plano in the early 2020s 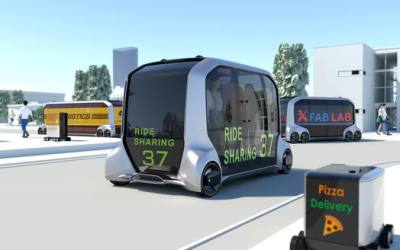 With the combination of construction and the influx of new employees commuting to the Legacy business area in Plano, it's no secret that traffic is becoming more congested. Here are three transportation-related projects underway that could make an appearance in Plano soon: When complete, the east-west running rail will connect southeast Plano with the Dallas/Fort Worth International Airport. The construction of the rail will also include the addition of two new stations in Plano—one on 12th Street and another on Shiloh Road.

To read more about what’s next for the Cotton Belt Line, see our previous coverage here. Toyota Motor Corporation announced at a press conference this month a concept plan that would integrate autonomous vehicles with various business applications, such as delivery services and mobile retail stores and work stations.

“This announcement marks a major step forward in our evolution towards sustainable mobility, demonstrating our continued expansion beyond traditional cars and trucks to the creation of new values including services for customers," Toyota President Akio Toyoda said at the press conference.

Toyota, whose North American headquarters is located in Plano, has partnered with global companies such as Uber, Amazon and Plano-based Pizza Hut in developing the e-Palette project.

Ming-Jou Chen, the Toyota safety technology communications manager, said feasibility testing is expected to begin in the early 2020s. She said discussions about where the testing will take place has yet to begin. 3. Uber hopes to unveil Elevate project in Dallas by 2020

At a summit in April 2017, Uber announced plans to develop electric aircraft and charging stations for those aircraft in the Dallas—Fort Worth area, as well as Dubai, United Arab Emirates.

The ride-hailing company hopes to begin its first demonstration of the Uber Elevate project by 2020, according to a company press release.

Uber has since released a video of how the Elevate project could look in the Dallas area.

“What started as a simple question [of], ‘Why can’t I push a button and get a ride?’ has turned, for Uber, into a passionate pursuit of the pinnacle of urban mobility—the reduction of congestion and pollution from transportation, giving people their time back, freeing up real estate dedicated to parking and providing access to mobility in all corners of a city,” Uber Chief Product Officer Jeff Holden said in the news release. “Urban Aviation is a natural next step for Uber in this pursuit, which is why we are working to make push a button, get a flight a reality.”