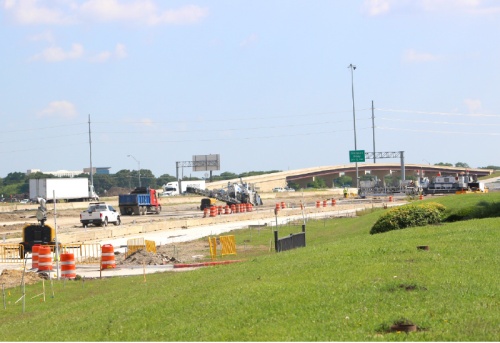 The SH 121/I-635 interchange project will widen roads and build new bridges to better connect Grapevine, Coppell and Flower Mound.

One of the most congested interchanges in the state is about to reach a major milestone.

The SH 121/I-635 project broke ground last year to help relieve bottlenecking in Grapevine, Coppell and Flower Mound. Three bridges included in the project will open to the public this summer.

The first is the northbound SH 26 off-ramp to SH 121. The bridge will probably open in mid- to late June, officials said. This will be followed by the first half of the Bass Pro Drive bridge over SH 121. Finally, the southbound SH 121 bridge to I-635 bridge will open.

This work comes as part of a $370 million Texas Department of Transportation project to rebuild and widen SH 121 north of the Dallas-Fort Worth International Airport. This project will accommodate new interchanges at I-635 and FM 2499. The Bass Pro Drive bridge in Grapevine will also be widened to six lanes and reconstructed along with the frontage roads of Bass Pro Drive, SH 121 and FM 2499.

“These bridges are going to be very important to improving the mobility that we need in that area,” said Gary Fickes, the Regional Transportation Council chairperson and Tarrant County commissioner whose precinct includes Grapevine, Colleyville and Southlake. “We’re adding hundreds of people to our greater area of the Metroplex every day. Most of them are bringing a couple cars, and not one of them is bringing a square foot of road with them.”

The work taking place at SH 121 and I-635 was originally part of the 2010 DFW Connector project. The DFW Connector is a TxDOT project aiming to improve mobility along SH 114 and SH 121. The initial project wrapped up in 2014 and widened those highways. While the SH 121/I-635 interchange was recognized as needing work, there was not enough room in the budget to include the project at that time.

Fickes said funding for the project came with restrictions specific to free lanes. He said no toll lanes will be developed with this transportation project, although part of the improvements will flow into a managed lane.

Once this interchange project is finished, about $500 million in projects remains for various bridges related to the DFW Connector project, said Michael Peters, a public information officer for TxDOT.

With construction continuing at SH 121/I-635, this summer, drivers will not only see the new bridges open, but also the old bridges come down.

“That will require weekend work and weekend closures to make sure everyone is safe,” said Alyssa Tenorio, a public information manager for NorthGate Constructors.

Demolishing the old bridges helps construction crews complete pieces of the project, she said. Once the old bridge has been taken down, it frees up more room for crews to work.

“While there is still a lot of work to be done, it’s a great sign of the progress that we’re making on the project,” Tenorio said. “It means that we can continue to move forward, we can open new areas of work, and our guys can continue to keep building the highway system.”

A partnership with the mobile app Waze allows NorthGate to communicate when major lane closures take place, Tenorio said. It will also help drivers as the bridges open and new routes open up. Google Maps is also alerted to any changes, she said.

Once this project is complete, it could transform the area, Grapevine Chamber of Commerce CEO RaDonna Hessel said. The construction should signal progress in the area and encourage businesses to come rather than deter them, she said.

“I think [the area by the mall] will change immensely once [the roads are] all opened up,” Hessel said. “It’s just like anything, where the property values start going up and people start becoming interested because it becomes the new thing or the hot spot. I think people are just on hold waiting for it to be finished.”

Until then, however, she said the area is still painful for drivers, who have to add 15-20 minutes to get through the construction.

The main problem for drivers on a daily basis is the single-lane exit for SH 114 from SH 121, Grapevine resident Allison Domanic said.

“It takes me at least 20-plus minutes to go about a mile or two,” she said. “I sit in this every day on my way to work.”

Other than that, she said, construction has not been an issue except for times at night when an exit is closed.

Construction has not had much effect on Esparza’s Restaurante Mexicano owner Steve Brown, either, but he said he credits that to the regular emails he receives from NorthGate about the project. He lives in Coppell and drives over the Bass Pro bridge to reach his job in Grapevine. Now, an email will alert him to an upcoming lane closure so he can find an alternate route ahead of time.

“Anybody that has to deal with this, I recommend that they sign up and they get updates for whenever there are lane closures,” Brown said.


Work to be done

With an estimated 2022 completion date for the project, Tenorio said the next year and a half of work will be kicked up a notch.

The good news, she said, is that the project is about 30% complete. The goal is to be 50% complete by the end of the year.

While recent rains have slowed the project over a few weekends, she said crews have been able to make up that work. So far, the weather has not affected the project long-term.