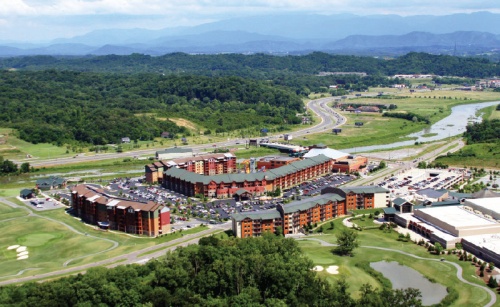 Tourism is anticipated to hit a new wave of growth because of a new attraction coming to Grapevine; Stand Rock Hospitality’s resort and water park.

Stand Rock will be Grapevine’s third water park, and it will be located within 3 miles of the city’s two other water parks and resorts, Great Wolf Lodge and the Gaylord Texan Resort.

“We’re fortunate because we have so many [tourism attractions],” Lyons said. “We have Legoland Discovery Center, Sea Life Aquarium, the Grapevine Vintage Railroad, Nash Farm, Historic Vintage Main Street for the great shopping; we have Grapevine Mills, the Bass Pro Shops, and I’d be remiss if I didn’t say that so many of the visitors that come to Grapevine come for the great festivals and events, like Christmas Capital of Texas, like Grapefest, like Main Street Fest and the Grapevine Urban Wine Trail.”

Lyons said 84 percent of the sales tax revenue in Grapevine is paid by tourists. This percentage translates to a $2.4 billion tourism industry in gross sales from its approximately 15 million visitors annually—a number Lyons said the city expects to see increase when TEXRail comes online.

“[The sales tax revenue] is huge,” Grapevine Economic Development Director Bob Farley said. “From the city’s perspective, that means that we’re able to provide more services for our citizens.”

Lyons said Stand Rock will only add to Grapevine’s tourism core and heavy family attraction atmosphere and will reinforce Grapevine’s identity as the premier tourism destination of North Texas.

On Aug. 2, 2016, Grapevine City Council approved an incentive package for Stand Rock Hospitality. The package allows Stand Rock to build Phase 1 of a 1,020-room resort that will include 190,000 square feet of entertainment space, including indoor and outdoor water parks, an arcade, mini-golf, laser tag, rock climbing, a spa, and multiple dining outlets and meeting spaces. Phase 2 will include 400 additional rooms and 200 condominium units.

Stand Rock officials said Grapevine is the perfect destination for the resort.

“Grapevine is a proven market and tourist destination and is well-located within the Dallas-Fort Worth Metroplex and in close proximity to the region’s leading family tourism destinations and [the Dallas/Fort Worth International] Airport,” said Jon Regnerus, director of development for Stand Rock Hospitality, in an email.

Farley said Grapevine’s location is a big bonus because from a transportation standpoint; Grapevine pulls in visitors from not just surrounding states, but also internationally with its proximity to the DFW Airport.

“[Grapevine] already pulls people from a long geographic distance to places like Gaylord and Great Wolf, and [developers like Stand Rock Hospitality] look for that,” Farley said. “… That was already proved up here. It’s already worked.”

Farley said currently Stand Rock is at work on its site development plan.

“They’re planning to develop 33 acres, and they’re planning to put close to 1,000 rooms, and it’s a little bit tighter than you would think,” he said. “Thirty-three acres seems like a lot, but when you start adding on next phases and that sort of thing you have to change a lot of parking and configurations, so it’s more complicated because of that.”

He said Stand Rock is hoping to present a plan to the planning and zoning commission later this spring.

With the hotel’s water park and other amenities, Lyons also said Stand Rock fits in well with the other two major resorts in Grapevine.

She said the Gaylord Texan attracts convention attendees and business travelers from across the nation as well as internationally. The Great Wolf Lodge attracts a different market, however.

“[Great Wolf Lodge is] looking at the drive-in market—about 350 miles or less,” she said. “So they’re attracting those guests. But guests that are being attracted by the Great Wolf are often multigenerational travelers, like grandma and grandpa, mom and dad, and the kids. … So those two significant properties do drive attendance at the different venues throughout the city.”

“In addition, it will extend that appeal past the 350-mile range, too, because that’s going to be a really unique offering,” Lyons said. “We will now have a collection. We’ll be a three-water park destination. So that pushes out our reach for potential visitors. That will increase it.”

In addition to these two, and soon to be three, resorts, Lyons said Grapevine is host to 18 additional hotels within its city limits, which she said encourages a broad range of visitors to come to the city.


Grapevine as a destination

Farley said establishing Grapevine as a tourism destination is more than adding hotel rooms—it is about building a tourism environment.

He said the plethora of things to do in such a concentrated setting sets Grapevine apart from any other tourism destination in Texas.

“I don’t know that there are any other family-centered entertainment areas like there has been in Grapevine, at least up to this point, anywhere else in Texas,” Farley said. “… With some of the places you go that have larger parks, you go to the park, but you never leave the park and you don’t really have much of a community experience. You have whatever the facility is, and that’s pretty much it. … But here, we [want visitors to] feel comfortable moving around the community.”

“[Grapevine] offers so many unique shops, restaurants and entertainment destinations in addition to the beautiful wineries,” Neibling said. “The Grapevine CVB, and the vision of CVB director PW McCallum and Mayor William D. Tate, have made it a thriving city, which welcomes millions of visitors each year.”

Farley said the city has made a point to curate its downtown and make connections between places people naturally gather and other parts of Grapevine.

“The idea was to be welcoming to guests, whether they came here for a couple days, or business meetings, or a family’s summer vacation, or Christmas Capital or any of that other kind of stuff, and we try to theme those things so that they overlap,” he said. “When we’re promoting Christmas Capital of Texas, and the hotels are also doing their Christmas [events], they all kind of feed off each other.”

Lyons said any community that wants to be successful with a tourism project has to have elements that reflect the destination’s identity.

“The things that we have here really do that,” she said. “… Grapevine also continues to expand our offerings. We continue to offer new shopping, new dining, so there is always a sense of something new in Grapevine and something is coming, so that is a great experience for folks here as well.”