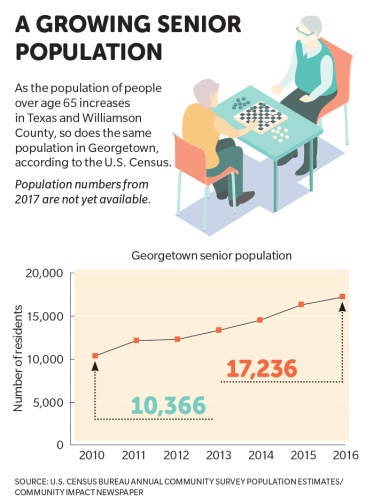 As the population of people over age 65 increases in Texas and Williamson County, so does the same population in Georgetown, according to the U.S. Census.n

Between 2010 and 2017, Texas experienced the largest senior population increase nationwide, both in number and percentage change, with an addition of 3.1 million seniors—up 12.6 percent, according to the U.S. Census Bureau.

Williamson County saw an even more dramatic increase in the senior population between 2010 and 2016, with a gain of 24,405 people, or a 65 percent increase in the number of people at or above the age of 65, according to the census.

Georgetown—home to the 55-and-over Sun City Texas retirement community—followed a similar trend, adding 6,870 residents age 65 and older, an increase of about 66 percent between 2010 and 2016, census data show.

“The growth comes from people who are migrating into the state and from people who are just aging and living longer,” said Annette Juba, deputy director of programs at AGE Central Texas, which provides resources and education to senior citizens and caregivers.

Williamson County is the 22nd-highest ranked county in the country in terms of overall population growth, according to the Census Bureau. Just under 74 percent of that growth is attributed to migration.

Amy Temperley, coordinator at the Aging Services Council of Central Texas, said people have known this senior boom was going to happen for decades. The baby boomer generation—born between the mid-1940s and mid-1960s—coming into senior age, paired with people living longer today than at any other time in history, created a predictable “double whammy” in population growth, she said.

The categories of senior-living facilities fall on a spectrum ranging from independent living to skilled nursing facilities.

Independent-living facilities are housing complexes in which residents are still able to perform daily activities without assistance.

Skilled nursing facilities, commonly referred to as nursing homes or rehabs, are facilities for people dealing with injuries who need round-the-clock medical care.

Assisted-living facilities are intended for people who need assistance with various daily activities, such as using the toilet or getting dressed, but do not require a 24-hour nurse. Under the umbrella of assisted living falls memory care, which is for people who have conditions such as dementia.

“I think when senior facilities and this idea of needing specific communities and places for older adults first came about, it was much in the way of the medical model,” Juba said. “It was very much like a hospital that people lived in, and the industry sort of worked its way away from that to more of a home-like environment. This idea of aging in place and aging in communities really took hold, and the idea was to make places much more welcoming, home-like and inviting.”

Georgetown is home to about 32 percent of all seniors living in Williamson County, and the city has more than 20 companies and nonprofits devoted to providing senior assistance at various levels.

The complex, located at 4700 Williams Drive, Georgetown, will feature 244 units ranging in size from studios to three bedrooms, with half of the units considered affordable, or set aside for tenants with incomes at or below 60 percent of the area’s median income. In addition to apartments, Merritt Heritage will feature amenities such as a movie theater, a gym, a salon and spa as well as shuttle service.

Georgetown City Council Member Steve Fought, whose council district covers about half of Sun City in northwest Georgetown, spearheaded a study last year to explore the feasibility of building an inpatient residential hospice care facility in the Georgetown area. The study was performed through a partnership between the city, Baylor Scott & White Health, the Georgetown Health Foundation and Hospice Austin, which operates the Christopher House hospice facility in East Austin.

Fought said while demand exists for a dedicated inpatient hospice center, the demand is not strong enough to warrant a recommendation to build a stand-alone facility. He said many of the people in Georgetown who might become patients of such a facility already receive care elsewhere and would likely be reluctant to make what could be a significant life change by moving to a new center.

As Vickie Orcutt was transitioning into her new position as executive director of Faith in Action Georgetown in the spring of 2016, she found out the nonprofit organization, which connects volunteer drivers with seniors needing transportation, had a standing practice of capping the total amount of weekly rides at no more than 70.

Orcutt said she knew there was more demand for Faith in Action’s service, but it wasn’t until March 2017 when the nonprofit doubled its daily administrative support hours and installed a second phone line that staff really began to see just how much demand there was. Since 2017 the organization has added between 21 and 25 new clients every month, Orcutt said.

“The expansion of our availability is really what has allowed us to meet the existing need,” Orcutt said.

With the increase in demand for service expected to continue, Faith in Action is starting to plan for other ways to meet the expanding need, Orcutt said. One plan in the works would make a van with a part-time driver available so several clients wishing to get transportation to the grocery store or other locations could ride together. This would make service more efficient and help a larger group of clients at the same time, Orcutt said.

Faith in Action’s need for volunteers should also continue to grow along with Georgetown’s population, Orcutt said.

“The need for our services are going to be even more paramount,” Orcutt said.

Juba pointed out that one of the biggest issues her clients face is the price of senior-living facilities.

According to Genworth, a company that helps people with life insurance and long-term care financing, the average monthly cost of an assisted-living facility in the Austin area is $4,895. Genworth predicts that cost will rise to $6,578 by 2027.

“In addition to those concrete, tangible needs, our seniors also want to continue to thrive in the world,” Juba said.