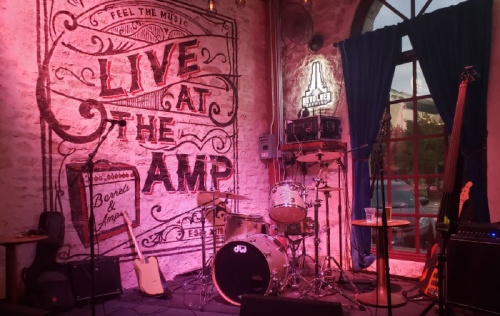 It was a right-place-at-the-right-time scenario for Mark Thompson, owner of 600 Degrees Pizza, and couple Dina and Karl Meixsell when they decided to open Barrels & Amps, a whiskey bar located in the heart of Georgetown.

Barrels & Amps opened Sept. 7 on the corner of Austin Avenue and Eighth Street. The project was the brainchild of Thompson, who said he was only looking for the right place to make it a reality. Then, he ran into Dina, who owns the building with her husband, and the three decided to go into business together. They also brought in Thompson’s son, Jerry, as executive chef and the fourth owner of the business.

“The stars lined up,” Dina said.

The left side of the business has a 65-foot bar lined with liquors and 75 beers on tap. A small stage—the first of a planned two—sits at the right corner. The business is also adorned with trinkets that Mark says pay homage to the history of the building, including the words “Oak Street” written along the wood floor—the previous name of Eighth Street.

“It’s going to be a fun place,” Mark said. “The main thing is that everyone who walks through the door feels like family, and they’re ready to have some fun.”

Dina added that the name of the business expresses the vibe patrons can expect.

“When you think about barrels, you think, ‘Yes, good stuff to drink,’ and amps is like, ‘Yes, good music,’” Dina said.

The business is only partly complete, with plans to add an expanded area with a second bar and a second stage. Against the windows, which face Austin Avenue, will be a broadcast studio space for live radio shows to take place, Mark said. The expanded space is anticipated to open by the end of the year.

In the future, the business also plans to expand by adding a rooftop bar, but that is two to three years down the road, Dina said.

“What you see is what you get here,” Mark said. “There’s no mask here. We’re going to bring back that old-school whiskey bar vibe.”