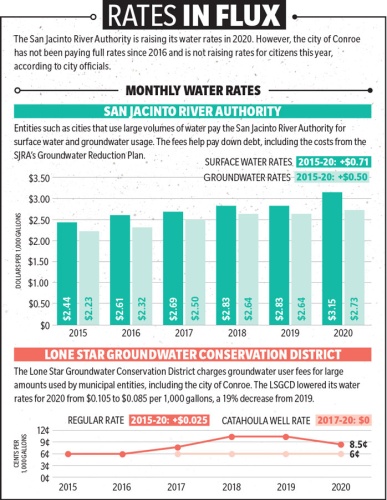 Controversy surrounding water use in Montgomery County—and who will pay for it—is continuing among stakeholders including the city of Conroe, the San Jacinto River Authority and the Lone Star Groundwater Conservation District.

Additionally, on Aug. 14 the LSGCD reduced its water rates from $0.105 to $0.085 per 1,000 gallons due to anticipated revenues, expenses and activities after reviewing the 2020 budget, officials said in a statement.

The rate adjustment applies to cities, municipal utility districts and independently owned utilities participating in the SJRA’s Groundwater Reduction Plan, including the city of Conroe. The payment increase could pass through the large entity users down to individual residents’ bills.

“We’re not proposing to go up in the city’s water rate right now,” Williams said.

Uncertainty surrounding the groundwater conservation rules set by LSGCD led in part to the SJRA rate increase, SJRA officials said. They also cited uncollected revenue and the need to fund the SJRA’s surface water treatment plant as other reasons.

“The [Groundwater Reduction Plan] was built to satisfy [the LSGCD’s] requirements that we develop a plan to use less groundwater,” SJRA General Manager Jace Houston said in a statement. “Changing the rules is costly for utilities, cities and MUDs. Ultimately everyone’s water bills go up, not down.”

The SJRA implemented its Groundwater Reduction Plan as a result of the groundwater reduction mandate issued by the LSGCD, an entity that regulates groundwater resources in the county. The SJRA is tasked with implementing LSGCD groundwater rules.

The mandate tasked large-volume water users, including Conroe, to reduce their dependency on groundwater by 30% of their 2009 usage by 2016.

However, LSGCD’s groundwater reduction mandate was declared void and unenforceable by Judge Lamar McCorkle in May after years of litigation. The Texas Water Development Board also rejected the LSGCD groundwater rules in May, instructing the LSGCD to use management goals approved by groundwater districts in surrounding counties.

LSGCD General Manager Samantha Reiter said McCorkle's ruling, wrapping up the lawsuit between the LSGCD and the cities, contributed to the LSCGD's decision to lower its 2020 water rates, even though the appeal to the TWDB results are unknown.

“Although the total costs associated with the management plan appeal are not known, the [LSGCD] board reviewed the [LSGCD]’s Operating Budget, and determined the [LSGCD]’s current financials support a decrease in water use fees … for the 2020 calendar year,” Reiter said. “The [LSGCD] board will continue to review fees in connection with maintaining a balanced budget and reserves the right to increase fees due to increased operational expenses, including without limitation, litigation expenses.”

Reiter said the goal is to have a draft of the new groundwater regulations ready for public comment by summer’s end.

“The … goal is to create rules that will allow the district to manage and regulate the groundwater resources as required and legally allowed under Chapter 36 of the Texas Water Code,” Reiter said. “The biggest justification for making changes is the decision by Judge McCorkle invalidating the large-volume groundwater user reduction rules.”

In August 2015, the city of Conroe and seven other large-volume water users, including local utility provider Quadvest, filed a lawsuit against the LSGCD opposing water rate increases and its groundwater reduction regulations for large-volume users.

However, the May TWDB ruling clarified the LSGCD does not have the statutory authority to adopt, regulate or enforce the 30% reduction rules, officials said.

Instead, the TWDB required the LSGCD to submit a new management plan for groundwater use, similar to the plans approved by the other four nearby groundwater districts within Groundwater Management Area 14 across 20 Houston-area counties. Alternately, the TWDB said the LSGCD could accept the old 2010 or 2016 groundwater rules.

“The district must manage and regulate the groundwater in Montgomery County without violating Texas law and while protecting personal property rights,” LSGCD board Treasurer Jim Spigener said in a statement. “We cannot afford another expensive and divisive lawsuit.”

But the LSGCD board of directors also voted July 9 to appeal the TWDB’s rejection, according to Reiter. The 2010 and 2016 rules depict how much groundwater can be drawn from each of the major local aquifers over time.

Reiter said the LSCGD board was not in favor of using the old rules. She said the LSGCD went through an appeal for the 2016 rules, too.

“There’s a little bit of fear that we could have to go through a whole lot of litigation and lawsuits regarding if we were to accept the 2010 [rules],” Reiter said.

On July 11, Conroe City Council unanimously passed a resolution supporting the LSGCD’s appeal of the TWDB rejection and opposing the 2010 or 2016 groundwater rules being incorporated into the LSGCD’s groundwater plan.

Quadvest President Simon Sequeira said in an email he believes the conflict raises questions about whether large-volume users and utilities should follow groundwater rules already deemed unreasonable, delay and wait for new rules, or refuse to adopt new rules.

Sequira said he believes the problem is not with the LSGCD, but with the other four groundwater management entities within GMA 14.

“The question is whether [the] TWDB can or will act to compel the other districts to adopt new [rules] for Montgomery County, and if so, whether that … will be reasonable,” Sequeira said.

The SJRA’s water rate increase followed the TWDB’s rejection of the LSGCD’s proposed groundwater management plan for Montgomery County in May, citing uncertainty around groundwater regulations.

In response to the SJRA’s  increased 2020 water rates, the LSGCD released a statement July 12 saying the LSGCD has no control over the SJRA’s fees and that it believes there is no uncertainty regarding its groundwater regulations.

“Although [the LSGCD] is undergoing a much-needed rule revision, there is no regulatory uncertainty,” the statement said.

LSGCD officials said they believe the fee increases are due to decreased demand and increased expenses for the SJRA.

Conroe residents will not be paying water rate increases for the foreseeable future until ongoing litigation with the SJRA is addressed.

“What we have inherited is an unprecedented situation that came about because of legal rule and final court judgement and several other things that created this situation,” Melder said. “We’re going to stay committed to getting it fixed, getting it straightened out. … But we have a tough job ahead of us.”

“We are pursuing a meeting with the [LSGCD] but don’t have any comment at this time,” Conroe City Attorney Marc Winberry said.