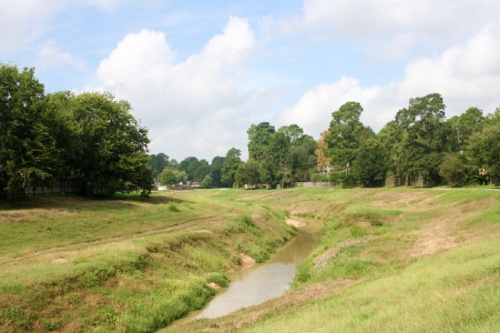 Faulkey Gully is among the Cypress Creek tributaries analyzed in a 2003 study.

When the Texas Water Development Board conducted a study of nine major tributaries along Cypress Creek in 2003, it came away with a list of recommendations for how to reduce flooding along those tributaries.

However, there was one problem: the funding to actually pay for those projects did not exist.

“Back in 2003, the thought was [the TWDB] had a lot of good ideas, but everything was too expensive, and no one had the money to build anything in that report,” said Matt Zeve, who served as chief operations officer with the Harris County Flood Control District for the past three years before being promoted to deputy executive director in October.

After Harris County voters approved a $2.5 billion bond referendum for HCFCD in August, the tributaries study has come back into focus, Zeve said. A breakdown for how the $2.5 billion would be spent included $60 million for major maintenance on Cypress Creek and its tributaries as well as $400,000 to update the study itself.

The study update is the first step, Zeve said. He said he hopes to be able to enter an agreement with a firm by Nov. 1 for the engineering investigation.

“A lot of has changed in 15 years, so we have to update the study to current conditions—models, land use, environmental rules and regulations—and update the cost estimates for what comes out of that to give us an idea [of] what we’re looking at dollars- and centswise,” he said.

As a list of projects starts to come together, Zeve said the county will start hosting public meetings to gather feedback on the projects.

The idea to update the study itself came from a community input meeting held before the bond election, Zeve said. The Cypress Creek Flood Control Coalition, which has advocated for flood projects along the creek since 1999, pushed for the update to be added to the list of bond projects.

Coalition President Dick Smith said the tributaries study is one of six pieces of a larger Cypress Creek master plan that also includes stormwater management in the upper part of the creek.

“Because of the flood recovery bond funding and the leadership of [Harris County] Judge [Ed] Emmett and HCFCD, we have the greatest confidence in flood risk reduction in the near 20-years since  CCFCC was created,” Smith said.

Recommendations from the 2003 study fell largely in line with the types of projects HCFCD does elsewhere in the county, Zeve said, including changing the dimensions of channels so they can carry more water and putting in detention basins for additional storage.

“The hardest part of all this will be the right of way acquisition,” Zeve said. “If we do widen some of these channels and ... construct some of these basins ... we will have to acquire right of way to acquire land. Land is very expensive in Harris County, and almost all the land along these tributaries is developed.”

Two tributaries—Dry Creek and Faulkey Gully—are located in Cy-Fair. Recommendations for Dry Creek in the 2003 study included buyouts, widening of drainage ditches and adding a detention basin. The projects were estimated to cost $15.1 million at the time.

Recommendations in the 2003 study for Faulkey Gully included one detention basins near Shaw Road and the widening of drainage ditches in the undeveloped area west of Shaw Road. The projects were estimated to cost $12.3 million at the time.

If all goes according to plan, Zeve said he hopes to wrap up the study update by April or May and have a list of recommended projects to take to public meetings. After that, the county can get to work on engineering, environmental permitting and right of way acquisition, he said.

“[Those are] the things that take a really long time, and we have to start right at the beginning of our project life cycle,” he said.