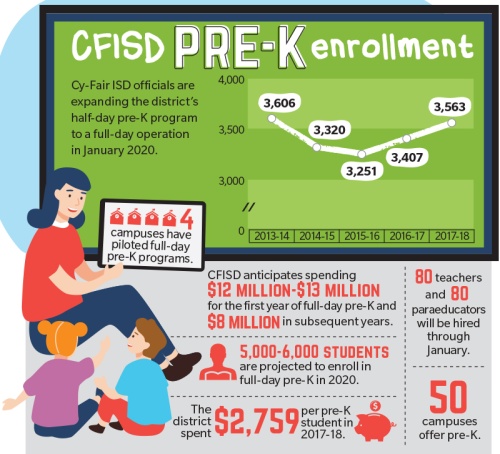 Some parents of preschoolers in the Cy-Fair ISD area will soon have access to full-day pre-K programs through the district at no cost.

Districts that cannot yet make this transition due to capacity issues can apply for a waiver for up to six years, but CFISD officials said they will be ready to start the full-day program as soon as January 2020.

“We’ve met with the different departments. We’ve talked about what needs to happen. We’ve already started putting some things in place,” Chief Academic Officer Linda Macias told the board of trustees in August.

The district already offers free half-day pre-K at 50 of its 56 elementary campuses where there are enough eligible students. By state law, students must be 4 years old by Sept. 1 and be either economically disadvantaged, an English language learner, homeless, part of a military family or in the foster care system to be eligible.

Because this change will alleviate logistical obstacles for many parents, Macias said she believes the program will grow its current enrollment.

“We believe that the best place to educate our prekindergarten students is right here with us in our Cy-Fair ISD classrooms,” she said.

CFISD has already piloted full-day programs or had partnerships with local private providers at four campuses, which Macias said has given the district a model to replicate at 50 campuses starting in January. This includes curriculum, transportation, food service, materials and equipment.

“Through working with the local pre-K providers and our district pilot full-day programs, we have developed an appropriately paced daily schedule, a list of age-appropriate materials needed for a full-day program and have written a rigorous curriculum appropriate for the 4-year-old students we serve,” Macias said.

CFISD Chief Operations Officer Roy Sprague said accommodations for the new full-day program will be prepared over the next several months.

“Some of our campuses obviously have capacity that we can actually absorb some of those students within the building,” he said. “Other campuses that are packed—that’s where we’ll be looking at relocating portable buildings at that campus or use a surplus building that may exist at that campus and utilize that for the space.”

Executive Director Pam Wells said districts may face additional costs not covered by state funding as well as challenges with classroom capacity, teacher recruitment, scheduling and transportation as they grow their pre-K programs. Some Region 4 districts that have launched full-day programs in the past have seen student enrollment increase, she said.

Up to 7,000 students living in the district could be eligible for pre-K, but when elementary principals surveyed eligible families that did not enroll their children, many said it was because the half-day program did not work for them, Macias said.

“Many working parents could not provide the midday transportation to a child care facility,” she said.

CFISD’s before- and after-school program Club Rewind will offer child care to preschoolers as well, which Macias said would allow parents to work while their children attend pre-K.

One of the driving forces toward full-day pre-K was Texas third graders were not meeting state standards in math and reading, said Bob Popinski, director of policy for Raise Your Hand Texas, a statewide public education advocacy group.

Ahead of the 86th legislative session, the Texas Commission on Public School Finance heard testimony about the effects of pre-K. Popinski said he believes kindergarten readiness is the best way to set children up for success—up to high school graduation, higher education and beyond.

“Over the past 10 or 15 years, the Texas Legislature has been kind of going back and forth on whether or not to fund full-day pre-K,” Popinski said. “I think finally the momentum hit this session—a lot of research, a lot of folks backing it.”

HB 3 required districts to offer full-day pre-K for eligible 4-year-olds and allocated $780 million a year to school districts in an early education allotment.

This allotment is a 10% funding increase for each student who is economically disadvantaged or an English language learner—amounting to about $600 per student, Popinski said. Children who meet both qualifications would yield $1,200 for their district.

“That big pot of money goes back to the school district for early childhood—pre-K through third grade—needs,” he said. “You can spend it on anything that helps you meet standards for those grade levels.”

CFISD officials anticipate receiving about $15 million from the allotment in 2019-20. Macias said the pre-K expansion will cost the district between

$12 million-$13 million in the first year of implementation and about $8 million in subsequent years.

Half of the funding for full-day pre-K is tied to the state’s public school finance funding formula, and the other half comes from the allotment. Historically, state lawmakers have temporarily provided grant money for pre-K only to later take it away, said Michelle Smith, the vice president of policy and advocacy for RYHT.

“Perhaps moving forward, a couple sessions from now, there needs to be a conversation about moving all of that money to formula funding to really support full-day pre-K,” she said.

Set up for success

The more prepared students are for school, the greater chance they have of success, Wells said.

“Investing in early childhood education is a more effective and efficient use of education resources,” she said. “It is much more challenging and expensive to provide remediation for children.”

Not only does pre-K improve kindergarten readiness, but a 2017 report from the Texas Education Agency found it also is associated with a lower likelihood of dropping out of school and a higher likelihood of enrolling in college.

Wells said groups such as the Greater Houston Partnership support pre-K because they believe improving student outcomes will contribute to the region’s quality of life and economy in the long-term.

House Bill 4, passed by the state Legislature in 2015, required districts across the state to implement more rigorous pre-K standards provided by the TEA. Curriculum must address 10 developmental components, which range from social and emotional development to mathematics to fine arts.

“The children work to develop social-emotional skills, which assist them in making friends and contributing to classroom discussions in a positive manner,” Macias said.

State Rep. Jon Rosenthal, D-Houston, whose district covers a portion of Cy-Fair, said while non-eligible children can attend pre-K at one of several local accredited private providers, the state-funded program gives the same opportunity to families that cannot afford such options. Moving forward, he said lawmakers must focus on strengthening revenue streams to ensure the current program is sustainable.

RYHT advocates said they are hopeful the Legislature will continue to support full-day pre-K and incrementally expand eligibility over time until it is offered to all Texas students.

“There will always be … the people that push back and say kids should be at home with their moms and dads, but that’s just not where we are as a state right now,” Smith said. “We have kids that are entering kindergarten disadvantaged, and we want to make sure that we have as many kids ready to learn as possible.”