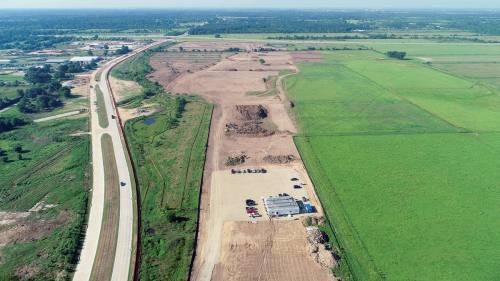 Land is being cleared for two Tomball ISD schools and a stadium at the northwest corner of Cypress Rosehill Road and Hwy. 99.

Land is being cleared for a 154-acre Tomball ISD complex at Cypress Rosehill Road and Hwy. 99, which will house an elementary school, junior high school, a 10,000-seat district football stadium and community center, and water and wastewater treatment plants.

As new facilities are being built, district officials said they are working to ease overcrowded schools over the next few years. The district announced in April the opening of the junior high would be delayed, citing permitting and other construction challenges.

“It’s detrimental for any district as far as reputation wise to have overcrowded schools and kids in [temporary buildings]. We try to avoid that as much as possible; we do have to face it while we build new schools,” Chief Financial Officer Jim Ross said.

According to data from the Texas Education Agency and TISD, Willow Wood Junior High enrolled more than its 1,264-student capacity in 2018-19. Wildwood Elementary has enrolled more than 920 students—its building capacity—since 2017-18.

TISD officials broke ground in late May for its district complex, which is funded by the $275 million bond referendum voters approved in 2017. Upon the passage of the bond referendum, both campuses were anticipated to open in August 2020. However, in an April letter to families, TISD Superintendent Martha Salazar-Zamora announced delaying the opening of the junior high to August 2021.

“The new junior high was planned to open in August 2020, but challenges in acquiring land, the impacts of Hurricane Harvey on building code regulations and county permitting have set our timeline back with the new junior high school delayed a year,” Salazar-Zamora wrote.

Ross said only the junior high has been delayed, as construction of a junior high takes significantly longer than an elementary school. While the site is being cleared, TISD is awaiting its permits from Harris County to begin vertical construction, he said.

“It’s not us. It’s other governmental entities that have the power to control the permit issuing,” he said.

However, Shawn Sturhan, Harris County Engineering Department’s assistant manager of permits, said in an email he claims no flood plain regulation changes should be affecting the project, as the buildings do not appear to be inside a flood plain. He said the site plan for the district complex was initially submitted in April and resubmitted in July for a second review.

“Most [of the review comments] appear to center around traffic operations and standard other items needed for approvals,” he said. “An overall site work permit will be given upon the site plan approval.”

The district projects just less than 1,000 new students for the 2019-20 school year, Ross said, with about
80 students more at Willow Wood Junior High this year and about 94 students more at Wildwood Elementary. From 2015-16 to 2018-19, TISD enrollment grew 20%, district data showed.

Since the third quarter of 2016, the Amira, Hidden Lake, Lakewood Court, Rosehill Reserve, Tealpointe Lake Estates and Treeline North subdivisions have broken ground within ZIP code 77377, which includes southern TISD. The communities will total 1,865 new homes at build-out, according to Metrostudy.

“I think this is a great, great move to build another junior high in the proximity of that area, because I think the district growth in that area is going to be probably greater than it is in any other section of Tomball ISD,” said Bob Fontenot, a founding member of the Tomball Education Foundation and a former TISD educator for 38 years.

“[When the new schools open], Willow Wood Junior High will drop down in half as far as the number of kids that are there,” Ross said. “Wildwood—it’s probably going to be 35%-40% of those students will be transferred.”

The new elementary will serve kindergarten to fourth grade, and the new junior high will serve seventh and eighth grades, according to district information.

While attendance boundaries for the new schools will likely not be finalized until the spring, Chief Administrative Officer Stephen Gutierrez said district administration has had preliminary discussions and plans to hold community engagement meetings this fall.

“We hope to have that done early in the spring so we can communicate and talk to parents and let them know what potential changes may be coming for the elementary and junior high grades,” he said.

In the interim, the board of trustees has worked with district administration to minimize the effects of overcrowding, said Mark Lewandowski, president of the TISD board of trustees, in a statement.

“While currently manageable, [high enrollment] interferes with student mobility within the building and results in crowded classrooms and hallways. We understand that this type of environment may not be conducive to learning, and our goal is to provide our students with the best learning opportunities we can,” he said.

“We have added six additional classrooms, which will help maintain a teacher-to-student ratio that benefits everyone, as well as an additional custodian, additional coaches and fine arts teachers,” Willow Wood Principal Bob Frost said in an email. “We have also added additional lunch tables to the cafeteria and rearranged room schedules to help alleviate any cross traffic issues in our hallways during period changes.”

Allison Mundy, the owner of Mundy Legal Services in Tomball and a parent of TISD elementary students who resides within Willow Wood attendance boundaries, said she is looking forward to the new schools opening but believes residents have concerns about management of the rapid growth and traffic patterns to and from the proposed district complex.

“[I think there are concerns about] just making sure the quality of the school district remains strong and doesn’t get watered down when we have more schools and more students and [are] ever growing,” she said.

Mundy said she moved her family from Cy-Fair ISD to TISD in pursuit of a smaller district, so she said she welcomes growth with caution.

“I think there was good communication out about [the junior high delay], but [we need to make] sure we’re forward thinking and there is a plan for all of this future growth,” she said. “It takes a couple years to build a school. Is this junior high going to be enough when you look at how many new neighborhoods are going in, how many new families?”

In addition to the new schools, an expansion of Tomball Memorial High School will add space for about 500 more students, Ross said. The $37.9 million project includes an expansion of the fine arts facilities, a new gymnasium, locker room renovations, an expansion of Career and Technical Education, additional classrooms and a cafeteria expansion, he said.

The project is slated to finish in August 2021 but will be done in several phases with each phase opening as it is completed, Ross said. The district anticipates seeking construction bids in October.

Bond funds have also been allotted for renovations of Tomball Intermediate School’s Main Street front and Tomball High School’s auditorium, and construction of a natatorium at Tomball Memorial High and an agriculture science project center at Tomball High, all of which are anticipated to be finished by August 2021.

Lucia Clark, a Realtor with Better Homes and Gardens Real Estate-Gary Greene who works in south Tomball neighborhoods, said she believes construction of new facilities and schools is a draw for prospective residents.

“If we don’t have some of those facilities, it’s going to limit some of the things that we can offer to those children and those students,” she said. “I think it makes a difference [in bringing residents to the district] as far as what you can offer the students.”