Conroe ISD construction projects are on track, and other takeaways from the district's March 19 meeting 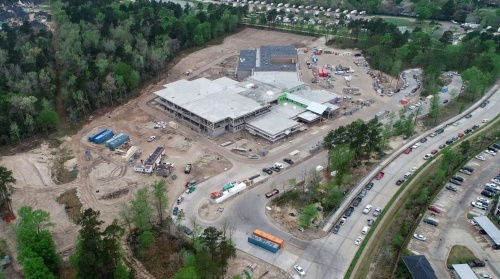 Construction is progressing at Suchma Elementary School ahead of its planned opening in August.

Construction and renovations at several Conroe ISD schools are on schedule and under budget, according to CISD Director of Planning and Construction Easy Foster.

Foster presented updates on the construction of the district’s newest buildings, Suchma Elementary School and Stockton Junior High School, at the CISD regular board of trustees meeting March 19. Foster also updated the board on work progressing at several campuses.

At Suchma, Foster said that paving at the site is nearly complete and the building structure is becoming more enclosed. Final work is underway at several spots inside the new school ahead of its planned opening this August for the 2019-20 school year.

“The attitude and personality of that building is starting to come to life,” Foster said.

At Stockton, the district’s other new campus, Foster said the building structure and portions of the roof are taking shape while the school’s major equipment has been placed inside the structure. That facility is set to open one year after Suchma, in August 2020. The framework of the Stockton Junior High School campus, which is set to open in 2020.[/caption]

The replacement of older portions at Austin Elementary School, renovations at Conroe High School and roof work at Houser and Giesinger elementary schools as part of the district’s life cycle projects are also on schedule and proceeding as budgeted, Foster said.

“We’re under; so far, so good,” board member Skeeter Hubert said of the projects' budgets. “It’s amazing you’re able to do that.”

Other agenda items from the March 19 meeting:

Suchma mascot and colors approved
The board unanimously approved a mascot and color scheme for Suchma ahead of its opening this fall. With input from district families as part of a community survey, the Eagles were selected as mascot alongside school colors of red, white and blue. District employees and namesakes David and Sheree Suchma were in attendance for the announcement.

New district hirings
The board approved six new CISD employees as part of its consent agenda on Tuesday evening. The district’s special education program filled three spots, with Kelsey Spille and Jon Patton hired as educators at Grand Oaks High School and Oak Ridge High School, respectively, and Delaina Wimpee was hired as a speech language pathologist. Austin Jones was hired as a programmer, Wendy Wilkinson was hired in the English department at The Woodlands High School and Trisha Brandimarte was hired at Wilkerson Elementary School in the Project Acceleration for Student Success.