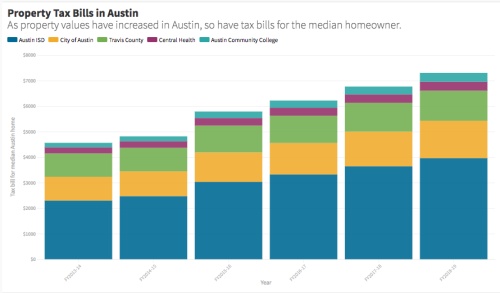 The median home value in Austin, and property tax bills, continue to increase.

Over the last six years, each of those five entities have kept their tax rates relatively consistent.

However, the median value of a home in Austin has skyrocketed in that time frame. The $332,366 median home value now is 79.5 percent higher than it was six years ago.

That spike in property values has led to a corresponding rise in property tax bills within the city, and increased revenues for the taxing entities.

Those totals do not include the homestead exemption, which decreases the tax bill for a homeowner provided the property is occupied as a principal residence.
SHARE THIS STORY