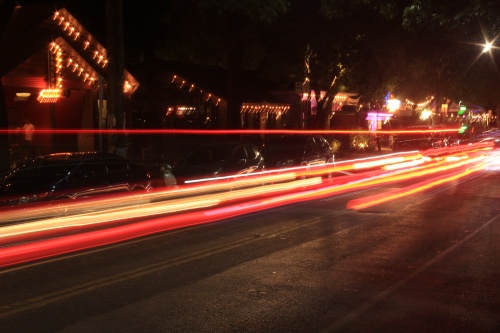 Rainey Streetu2019s explosive growth shows no signs of slowing down according to various development plans submitted to the city.n

Rapid growth in the Rainey Street district has transformed what was once a modest, Mexican-American neighborhood into one of the most expensive residential and entertainment corners in Austin. Now, growing safety concerns have triggered city leaders to rethink how best to manage the area’s explosive growth into the future and keep residents and tourists out of harm’s way.

The neighborhood’s shade-tree canopy is now overshadowed by luxurious high-rise apartments and hotels, and the single-family bungalows have mostly transitioned to bars with lines that stretch down the block on weekends. However, the area’s modest street-level infrastructure has survived much of the evolution, and data shows it was not built for the traffic it sees today.

City leaders say they have been brainstorming how to address the overload of cars, pedestrians, scooters and pedicabs for some time. However, after a woman was hit by a car and critically injured while crossing Rainey on foot June 9, it took City Council less than two weeks to initiate a pilot study and subsequent shutdown of Rainey to vehicular traffic during peak hours, similar to how Sixth Street operates on weekends.

“We know we have a situation that needs addressing,” said City Council Member Kathie Tovo, who led the call for the pilot and whose district surrounds the neighborhood. Tovo said it was time to be proactive and address the, “constant conflict” between vehicles and pedestrians.

The move has split the neighborhood. Those in opposition say shutting down the neighborhood’s only north-south thoroughfare would create a hazard for emergency vehicles. Supporters say cars should have been taken off Rainey a long time ago. However, both sides agree that changes are desperately needed, and the city has signaled a strategy shift in addressing the continuous change in one of its most historic neighborhoods.

The map below highlights several aspects of the Rainey Street district: existing hotel and residential density, hotel and residential projects that have been either approved or proposed, proposed and existing street closure plans and street entrances and exits into the district. Click on any of the colored areas for more details. The blue, green and red polygons respectively represent existing, approved and proposed hotel and residential projects. Hotel projects are darker shades, residential projects are lighter shades. The purple circles represent access areas into the district; darker shades represent areas that allow entrance and exit in any direction and lighter shades show areas that only allow one-way entrance and or exit. The red line represents the area of Rainey Street that will be closed to vehicular traffic during peak hours. The orange line represents the city's street closure plan during South-by-Southwest.


Years of explosive and unplanned growth

Bonnie Cahill arrived at the Towers of Town Lake in 2000—built in the 1980s, it is one of the oldest projects in the area. Although still a modest neighborhood at the time, Cahill said with its placement on the National Register of Historic Places, proximity to the convention center and downtown, she could sense the development pressure creeping toward the area.

“I even thought about investing in [properties] myself,” Cahill said.

In 2005, City Council voted to lean into that pressure and rezoned the area from single-family neighborhood to central business district—the densest zoning category offered by the city’s land-development code—opening up the area to a complete cosmetic and cultural change.

Most of the old bungalows turned into bars, while others turned into high-rise hotels and apartments. Today, the district, according to official site plans, has 225 stories of apartments and hotels, with 3,565 total units and no signs of slowing down. According to city documents, more than 425 additional stories of hotel and residential buildings have been proposed or approved for the Rainey district, bringing with them 3,648 units.

“We’re just getting started on what’s being built,” said Michael Abelson, a Rainey resident who has led local volunteer mobility task forces. “The population of Rainey is going to be equivalent to the current population of Lakeway when this is all built out, and Lakeway has more than 13 square miles. We have less than one-quarter of 1 square mile.”

Census estimates show Lakeway’s current population at just over 15,000. If everything is built out that is currently proposed and approved, the Rainey Street District would be home to 7,213 units according to official site plans and proposal documents. There are no official estimates on how many people populate those units, however, which range from hotel rooms and studios to four-bedroom condos.

Although the skyline in the district has dramatically changed, the street-level infrastructure has seen a less dynamic 14 years since the area’s rezoning. Growth has continued to outpace the city’s ability to meet needs on the ground, residents and city staff said.

“I don’t think anyone knew how fast Rainey would grow,” Austin Transportation Department Director Rob Spillar said. “We were caught by surprise.”

Spillar said the area’s “significant” mobility issues are the most urgent in all of downtown.

Spillar’s team is working on a mobility study for the area as a way to begin planning for growth in the decades to come. Eric Bollich, acting assistant director of the Austin Transportation Department, said it is better late than never.

“There was never a large comprehensive plan [for the Rainey Street District],” Bollich said. “At some point we’re going to need a study. So, why now? Why not?”

The volunteer mobility task force, led by Abelson, commissioned an independent mobility study for the area in 2016 through local engineering firm Big Red Dog. Although nearly three years old, it has the most up-to-date statistics on the area’s mobility. Data was collected in December 2016, before the completion of the 1,066-room Fairmont Hotel and the 173-unit 70 Rainey residential building, and before residents moved into The Camden, the 326-unit apartment complex in the area.

The study found between Thursday and Saturday—the busiest days of the week for the area—the roads were experiencing as many as three times the amount of vehicle trips recommended by the city’s land-development code. On Saturday, between 9:30 p.m. and 2:30 a.m., the study found 9,060 pedestrians crossed the district’s major intersections—roughly one pedestrian crossing every two seconds for five hours.


Similar to Sixth Street but not

The city will shut down Rainey Street, north of the River Street traffic circle up to Driskill Street, where the large surface parking lot is located, said Jacob Barrett, spokesperson for the transportation department. Barrett said it is not a matter of if, but when. The transportation department will finish up its mobility study by September’s end and will pilot the road closure before the end of the year, Barrett said.

However, Abelson called the comparison a “ridiculousness” and explained that Rainey, unlike Sixth, is a dense residential area.

C.J. Sackman, a developer working on the 82 Rainey project, said the shut down sets off major public safety concerns. Rainey is the only street that runs north-south through the entire district. Sackman said if it is shutdown, north-south traffic would be pushed to a 20-foot-wide alleyway.

“If we’re going to push everything on there, you could imagine, in an emergency situation, an ambulance trying to navigate that,” he said.

Not everyone is against a closure, however. Jeff Montesano, who moved to Austin in 2013 from Montreal and to the Skyhouse apartment complex on Rainey in 2015, said the move is long overdue.

“It’s ridiculous to have cars on Rainey Street at this point on weekends,” said Montesano, who also said he tries to avoid the scene altogether on Saturday nights. “It’s a super hazard as a driver, as a pedestrian and as a scooter rider. I don’t sympathize with scooter riders, but we’re in a situation where they’re all over and cars can barely move. This has got to happen.”

However, Montesano said a closure must be accompanied by a plan that would ensure everyone who lives in the area to get in and out of their home by car. Austin Mayor Steve Adler said as much as well.

“Obviously if we have a pilot that can’t provide access to the residents and can’t provide emergency services, then I would assume we’re not going to launch a pilot,” Adler said.

Adler also said that although it is hard to predict the outcome of the street closure, he was excited to see how it impacts future planning for the area. The date, times and length of the Rainey closure has yet to be determined. Barrett said such details will become clearer after the transportation department finishes its mobility study toward the end of September.

This article has been revised to correct Bonnie Cahill's last name.