Developers bringing thousands of homes to area north of Cypress 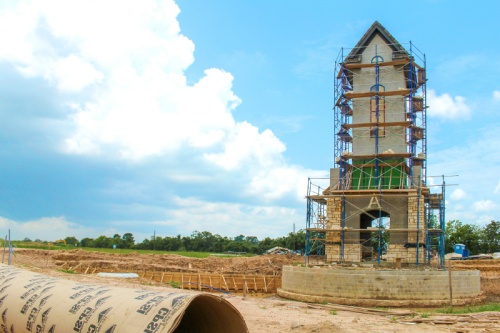 Construction crews work on a welcoming structure at the entrance to the new Amira community in June.

Developers along the borders of Cypress, Tomball and Hockley have spent the past few years staking claim to some of the few remaining large tracts of undeveloped land, and construction on several new communities is now underway.

Roughly 2,200 acres of land near the Grand Parkway and Mueschke and Cypress Rosehill roads are at various points of development across six different communities that will add thousands of new single-family homes when fully built out, a process that could take more than a decade.

“There is obvious growth in this area, and it’s something we’d like to be a part of,” said Houman Samanian, residential development manager with Ersa Grae Corp., which is in the early stages of a new 533-acre community north of Cypress. “There are great people there. There’s demand for single-family homes. The job growth is there.”

The new developments are launching as recently completed communities inside the Grand Parkway—including Falls at Dry Creek and Hidden Arbor, which broke ground in 2015 and 2016, respectively—continue to see strong sales as they near build-out.

With large tracts of land increasingly difficult to find in Cy-Fair, land sales professionals said they are seeing more land transferring out of the hands of investors and private owners.

For longtime property owners like Didi Carpenter—who has owned a 100-plus-acre tract of land for 32 years near the recently built Tealpointe Lake Estates—the rapidly changing area has come with multiple detriments, leading her to put her land up for sale. Many farming families that used to be in the area have already left, she said.

“The feeling of privacy is no longer there,” she said. “It’s just not the place it was when I moved here. You don’t see deer anymore. I used to see armadillos every night. Fox cubs were born here every year. Not anymore.”

Homes began preselling in May at Amira, a 370-acre Johnson Development community east of Mueschke Road that will feature 1,120 homes at build-out. Meanwhile, home construction started in 2018 on Tealpointe, where another 51 homes will go in on 1.5-acre lots.

Additionally, McAlister Investment Real Estate has assembled more than 600 acres of largely undeveloped land off the Grand Parkway in Hockley over the past five years, said Paul Connor, the principal and owner of McAlister. He said the land is under contract with a developer that specializes in larger, master-planned communities, but said he could not reveal additional details at this point in time.

“Hopefully, we will be closed, and they will be developing as soon as the end of the calendar year,” he said.

Ersa Grae started preliminary work earlier this year on its currently unnamed 533-acre community. The project could feature as many as 1,800 homes at build-out, Samanian said.

“We’re probably looking at the first section of lots being in the ground by September or October of 2020,” he said.

Samanian said the location for the new community was chosen based on projected job growth and demand for single-family homes in the area. Homebuilders have also expressed interest in the community, which Samanian said is particularly foretelling about what kind of demand the community will see.

“[Builders] have roots connected to the community much deeper than we typically do,” he said. “They’re monitoring potential buyers, and they have a good feel about certain areas of town. This one in particular received dozens of calls from various different builders who are interested in partnering up with us.”

As land values in the area continue to increase, more farming and horse-breeding families are choosing to sell their properties.

The land where the upcoming Amira community is underway was previously an Arabian horse ranch, according to records from the Harris County Appraisal District. The 40-acre Matt Family Orchard on Bauer Hockley Road was acquired by Bauer Hockley Road Investment LLC in 2018 following the death of founder Rick Matt, although the new owners said they plan to keep the orchard up and running.

Over the years, Carpenter said she built a farm, raised and bred horses and has fostered hundreds of Doberman dogs as a part of an animal rescue operation. She said she is regretful about parting ways with the land she has lived on for decades and is being mindful about who she sells to.

“I’ve turned down three or four offers because they said they want to bulldoze every tree here,” she said. “I’m not selling to them. I love these trees. When I sell, I have to be able to look at myself in the mirror and know that I sold to the right person.”

A batch of other land tracts in the area are up for sale, ranging from a 95-acre tract south of Tealpointe to several smaller tracts around Mueschke and Cypress Rosehill roads in Cypress.

Keith Edwards, a land broker with Caldwell Companies—a development and real estate firm with several land tracts in Cy-Fair—said the area around the Grand Parkway where Cypress, Tomball and Waller converge is the “bullseye” where growth is going. However, he said larger tracts are becoming increasingly hard to find, even that far out.

An eye toward flooding

The new development is largely concentrated in the Little Cypress Creek watershed, where officials with the Harris County Flood Control District said they enforce unusually strict development standards and higher requirements for how much detention needs to be created.

Normally when a developer installs drainage infrastructure in Harris County, it is done in a way that only serves their individual site. Developers within the program boundaries are required to participate in a regional approach that involves paying a $4,000-per-acre fee, according to HCFCD information. Funds collected from the fees are used by the HCFCD to acquire right of way along the creek for stormwater detention.

Both Connor and Samanian said McAlister and Ersa Grae, respectively, are working closely with HCFCD officials on their respective projects.

“Flood control is extremely conscious of making sure that their requirements are met so that downstream existing developments are not affected,” Samanian said. “We are constantly meeting with flood control … and they are monitoring the drainage analysis by our engineers.”

In a study into the Cypress Creek watershed released in May, researchers with Rice University and the Greater Houston Flood Mitigation Consortium found stormwater flow from Little Cypress Creek directly contributes to flooding on Cypress Creek during heavy rainfalls.

In a separate study released in April, researchers questioned how effective the county’s standards are when it comes to new development’s effects on existing development downstream. However, Phil Bedient, one of the study’s authors, said efforts to look at watersheds such as Little Cypress Creek as unique entities are a step in the right direction. He said standards in other parts of the county are not up to par.

“It’s not rocket science,” Bedient said. “When they don’t put in enough detention, you end up with these flows that are higher than they should be. They are not taking it back to the undeveloped condition.”