4 developments to follow in Sugar Land and Missouri City 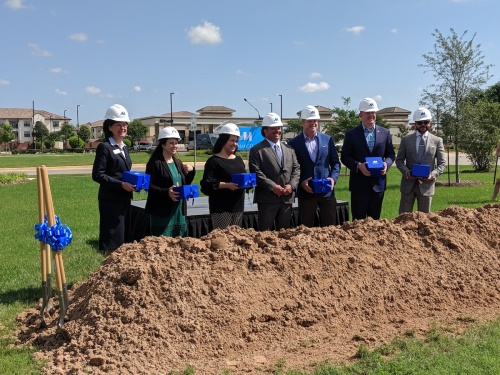 SUGAR LAND Marcel Group broke ground on Marcel District in May along University Boulevard in the Riverstone master-planned community.

The 7.3-acre development will include about 41,785 square feet of retail-, restaurant- and service-oriented space and about 27,000 square feet of Class A office space.

“Most of the areas that we build in are family-centric,” Marcel Group founder Vernon Veldekens said. “We like what Johnson Development is doing and want to be part of that.”

Tenants will include a mix of restaurant concepts, fashion boutiques, and salon and professional services. The grocer has not been announced yet.

CBRE is leasing the development, and some retailers and restaurants are already interested, Veldekens said.

The project is expected to take about nine months to complete, he said. “If we had someone that wanted to lease a full building, we will do that, too,” said Jennifer Rabon, a leasing agent with Realty 1 Partners. “I am looking at restaurants, fitness, dentist, medical, coffee and desserts.”

She expects the development to be ready for tenants by the end of the year. The 35-acre development, located at the entrance to the Sienna Plantation master-planned community at Hwy. 6 and Sienna Parkway, kicked off in 2016 with the opening of Academy Sports and Outdoors.

Since then, other businesses arrived, including Chick-fil-A, IHOP, GNC and a DaVita dialysis center.

A June 13 groundbreaking was held for a 60,000-square-foot section where development will include Spec’s Wine, Spirits and Finer Foods and a 24-Hour Fitness.

Future development of about 100,000 square feet is expected to include a Lidl grocery store.

There is also space for other retail on the east side of Academy, according to Williamsburg’s site plans.

The new space will be delivered around January 2020, according to Williamsburg. SUGAR LAND Shops at New Territory is a new 15,488-square-foot development slated for Hwy. 90 at Easton Avenue that will back up to Telfair and also be near the New Territory master-planned community.

“Our client likes the growth in New Territory and Telfair and this provides good visibility off of Hwy. 90 and is close to the H-E-B,” said Brett Levinson, the assistant vice president for Weitzman, a commercial real estate firm leasing the project.

Weitzman has begun preleasing on the project and plans to begin construction when the space is 50% preleased, Levinson said.

He said the developer is flexible on the types of tenants for Shops at New Territory but is also seeking tenants in the restaurant, specialty grocery store, medical and other service areas.

Once the tenants are in place, Levinson said he expects the developers to deliver on the project within four to six months.