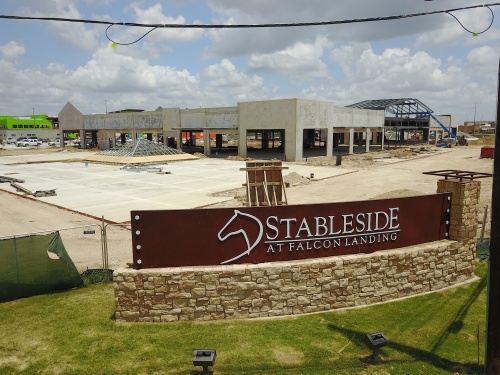 Stableside at Falcon Landing coming to Katy in Fall 2019. Stableside at Falcon Landing coming to Katy in Fall 2019.[/caption]

Exterior construction for the 35,000-square-foot retail section in Phase 2 of the project is expected to be completed in July, NewQuest Properties Vice President Austin Alvis said in an email. Phase 2 is located at the corner of Gaston and Greenbusch roads.

Tenants—which include The Union Kitchen, Jax Grill, Blockhouse Coffee & Kitchen and The Lash Lounge—will begin interior construction in July and hold grand openings starting in November, he said. Over 50% of the remaining buildings have been leased, he added.

Phase 2 is anchored by a 90,000-square-foot VillaSport Athletic Club and Spa, which is expected to open in late December and will include four resort-style pools, a full-service spa as well a a 12,000-square-foot children’s area.

Stableside’s Phase 2 will also have large patios, an area made up of artificial turf for relaxing and large live oak trees.

Phase 1 of Stableside had initial openings in late 2017. It includes a 102,000-square-foot Kroger Signature and 30,000 square feet of adjacent retail space with tenants that include Spec’s Wine, Spirits, & Finer Foods. The last of these tenants opened in late 2018, Alvis said.

“We are now seeking local boutiques and complimentary users that will add to the community feel ... and make this a vibrant place,” he said.